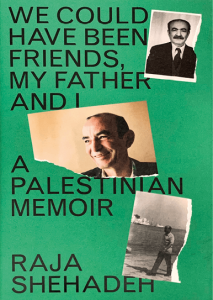 Before my father, Aziz Shehadeh, was murdered in 1985, he worked on putting his papers in order. But it took me 34 years before I opened that cabinet where all his papers were stored. When I did, I found a treasure trove. That cabinet was crammed with his papers and other memorabilia that I had left undisturbed. Among them were his black necktie, his fountain pen, and even his shaving brush. There were also office diaries recording his meetings and court appearances, together with many overflowing files containing his political writings on his proposal after 1967 for the resolution of the Palestinian–Israeli conflict. Aziz was a man of many parts: lawyer, activist, and political detainee. 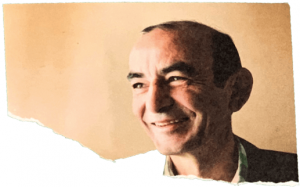 In that cabinet were files of neat and well-organized topics of his various political engagements and breakthrough legal cases: the release of blocked Palestinian bank accounts in Israel after 1948, the defense of those accused of the assassination of King Abdullah of Jordan, the prosecution of Archbishop Hilarion Capucci for gun smuggling, and the case of the Jordanian Free Officers who in 1957 attempted to topple the regime in Jordan. I describe some of these in the book.

When I began to read his papers, I realized with what impressive clarity my father had set forth his thoughts and how his pioneering ideas were deliberately distorted by Israel, the Arab states, and even some Palestinians. For so long, his written attempts to set the record straight had met with failure. I felt guilty that all these years had passed before I could spare the time to study the files in the cabinet and finally do what I had failed to do during his life: understand and appreciate his life’s work. In this memoir, I unravel the snags and complexities of our relationship. We Could Have Been Friends, My Father and I is not only the story of my father’s battles against the various oppressors of the Palestinians in key periods of our recent history, but also a portrait of a particular father and son relationship.

One of Palestine’s leading writers, Raja Shehadeh is also a lawyer and the founder of the pioneering Palestinian human rights organization Al-Haq. His Palestinian Walks has won the Orwell Prize. For more information on Raja, please visit https://thisweekinpalestine.com/raja-shehadeh/.