Available at The Educational Bookshop in Jerusalem, Ramallah, and Amman, and via Amazon. 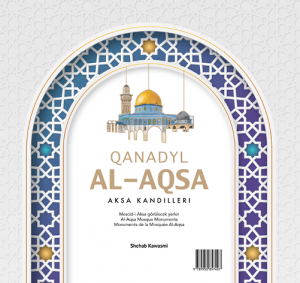 I spent most of my early childhood playing in the yards of Al-Aqsa Mosque. I would go with my friends and neighbors from Al-Silsila Market toward the mosque, along the alley that leads to Al-Silsila Gate, one of the gates of Al-Haram al-Sharif. I was only six years old yet still remember my first year at the Omari School that is part of Al-Aqsa Mosque. Every day, we took the same road. 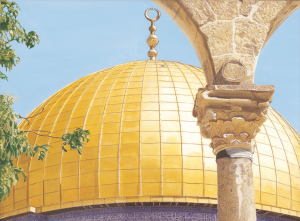 When Israel occupied Jerusalem in 1948, my family moved to live in Wadi Al-Joz, the neighborhood closest to the Old City. I had to change schools and consequently lost my friends and the good times I had spent at the mosque. No longer being allowed to enter, I always thought of the place that had been so close to my heart as a child. As I grew up, I realized that the mosque had become a prisoner. It is the first qiblah, the direction and destination to which Muslims turned to pray before Muhammad, during the second Hijri year, received the divine instruction to direct prayer towards Mecca and the Kaaba. Its architecture reflects its Umayyad, Abbasid, Crusader, Ayyubid, Mamluk, and Ottoman history, and it is a pillar of the Islamic, urban, and human scene of Jerusalem and Palestine.

The more brutal the occupation authorities’ assaults on Jerusalem and Al-Aqsa, the more effort they expend to efface its identity, the more they attempt to impose their control on the place and the times during which it is used, the more we need to stand up for our absolute faith in the justness of our cause. Each one of us needs to translate this faith into tangible action that constitutes a part of the overall efforts to defend Jerusalem and its holy mosque. 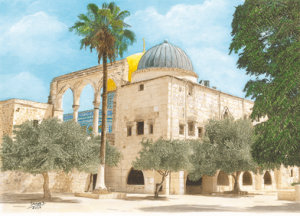 For these reasons, I produced this book that serves as an information guide to Al-Aqsa Mosque, the Dome of the Rock, and the monuments that surround the mosque. The book tells stories of the mosques, domes, minarets, arched gates, schools, corridors, gates, podiums, terraces, and water sources of Al-Haram al-Sharif; it covers Al-Buraq Wall, the Islamic Museum, and the Umayyad palaces.

I made a concerted effort to adopt diversified references in the text and explored religious, historical, geographic, and cultural sources in order to create a historical portrait of every monument. Instead of photographs, I have included pencil drawings and images created with watercolor or acrylic paint that depict each monument and the details of the mosque. The book contains 124 drawings that took six years to complete. 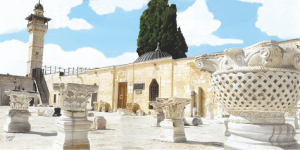 Painting has long been a tool of struggle and an expression of popular resistance against any brutal and atrocious occupation. Blogging and documentation in drawings equals written history, and it goes without saying that drawing is a universal language that does not need translation. An artist’s touching and expressive contribution, especially when it comes to Jerusalem and Al-Aqsa, will remain a source of inspiration for all who desire to creatively communicate the richness of the place and the people from a variety of perspectives, including the religious, historical, aesthetic, popular, philosophical, and cultural aspects. The Holy City and its Aqsa have long been a preferred destination for artists, voyagers, and Orientalists who have made this Holy Land eternal through their artistic and literary productions.

A final word: I pray that this book will contribute to knowledge about the city and the mosque and provide useful reading for all.