Seventy-three years into the ongoing Nakba, the language of partition remains prevalent in discourse on the plight of Palestinians. What is remarkable is how much partition has come, misleadingly, to shape our understanding of when and where Palestinian dispossession started. By the time the UN General Assembly recommended the partition of Palestine in Resolution 181 of November 29, 1947,*1 Zionist colonization had already been ongoing for over half a century. It was in 1897, notably, that the First Zionist Congress in Basel resolved to “create for the Jewish people a home in Palestine secured by public law.”*2 As Palestinian historian Walid Khalidi observes, the partition resolution must be seen as the “catastrophic (for the Palestinians) culmination of everything that had preceded it since the birth of political Zionism.”*3 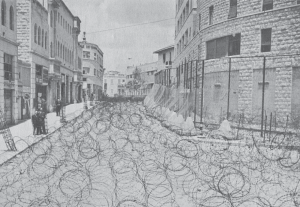 Today, Palestinians continue to endure aggressive Zionist settler colonialism, which seeks their erasure, displacement, and replacement in every part of historical Palestine. The focus on artificial partition obscures the continuity of Zionist settler colonization; it suggests that Palestinian dispossession from 1948 onwards, and before that time, somehow differ from that following 1967.

Jerusalem and the arbitrariness of partition

Partition continues to dominate discussion of Jerusalem, informing how the city’s past and present are analyzed. In Jerusalem 1948: The Arab Neighbourhoods and their Fate in the War, Palestinian scholar Salim Tamari highlights the need to avoid anachronistic language on Jerusalem and to transcend the city’s problematic division into “east” and “west,” which resulted from “the ruptures of war.”*4

While it may be tempting to argue away the division of Jerusalem based on the city’s proposed internationalization as corpus separatum under the partition resolution, this argument is not altogether convincing. Such line of reasoning, even if unwittingly, seems to lend legitimacy to Zionist colonization within the parts of Palestine allotted, in the partition resolution, to a Jewish state. Yet, the Palestinian people constituted the majority across historical Palestine on the eve of partition; they owned the majority of the land in the country and had vehemently opposed partition since its first iteration in the 1930s.*5

Early on, Zionist scholars openly acknowledged the colonial nature of their project and the need to implement it by force. In 1923, Ze’ev Jabotinsky wrote: “Zionist colonization, even the most restricted, must either be terminated or carried out in defiance of the will of the native population… This is, in toto, our policy towards the Arabs. To formulate it any other way would only be hypocrisy.”*6

As Khalidi put it, the partition plan in effect meant “the establishment of a Zionist state on Palestinian soil irrespective of the wishes of the overwhelming majority of its inhabitants.”*7 Palestinian opposition to the partition plan has been well documented as an encroachment on the Palestinian right to self-determination,*8 which remains the basis for challenging the partition of Palestine and division of Jerusalem. In a comprehensive briefing paper on west Jerusalem published in 2018, Al-Haq concluded that Palestinians retain their right to sovereignty over the entirety of Jerusalem.*9

Another reason to abandon partition altogether is the continuity of Zionist policy towards Palestinians across their fragmented geographies. Whether expelled beyond Palestine or displaced and dispossessed within its fragmented landscape, the Palestinian people have collectively been deprived of the exercise of their inalienable rights. The persistence of the Nakba is evidenced in the ongoing dispossession of Palestinians from Jerusalem and across historical Palestine.

Within the months leading up to May 1948, Palestinian neighborhoods in the western part of Jerusalem, including Baq’a, Talbiyeh, and Qatamon, were nearly entirely emptied of their native Palestinian inhabitants.*10 Of the 28,000 Palestinians in Arab west Jerusalem neighborhoods before 1948, only 750 “non-Jews” remained by the end of May, most of them Greek. They constituted less than half a percent of the original population.*11 Between August 1948 and February 1949, Israel declared west Jerusalem occupied.*12 Much like the plight of Palestinians within the Green Line, upon whom Israel imposed military rule until 1966, the military administration facilitated Palestinian dispossession and the implantation of Israeli settlers in Palestinian homes in west Jerusalem, to which no Palestinians have been allowed to return.*13

With the occupation and annexation of east Jerusalem in 1967, Palestinian refugees from west Jerusalem were once again able to reach their homes. Although the physical barriers had been removed, in the eyes of Israeli law, Palestinians were considered “absentees” and denied the right to regain their properties.*14 Thus, beyond physical separation from their homes, a legal regime was now in place that precluded their right of return. Fifty-four years later, Israeli colonization in east Jerusalem, the rest of the occupied Palestinian territory, and in the occupied Syrian Jawlan, has remained functionally identical to that institutionalized against Palestinians in 1948.

Jerusalem and the “logic of elimination”

As a microcosm of Palestinian oppression, the city of Jerusalem exemplifies Zionist policy towards the Palestinian people: Palestinians in Jerusalem have endured both the Nakba since 1948 and prolonged Israeli military occupation since 1967 over the eastern part of the city. The continuity of Palestinian expulsion, dispossession, and attempts at erasure from place and memory exemplify Patrick Wolfe’s notion of settler colonialism as “a structure not an event”: a continuous process of displacement and replacement of indigenous people(s) on the land. Wolfe has understood this structure as involving not only physical violence, through the massacres by Zionist militias that marked the Nakba, but also ongoing, structural violence aimed at the dissolution of indigenous societies.*15

Settler colonialism and apartheid, as mutually reinforcing frameworks, allow us to make sense of the systematic policy to drive Palestinians from their homes and provide a basis to comprehensively address Palestinian fragmentation. Israeli policy is best understood when examining the treatment of the Palestinian people as a whole. Doing so helps elucidate what Wolfe has termed settler colonialism’s “logic of elimination.”*16 In Palestine, this “logic of elimination” underpins the ongoing Nakba: what began with the mass expulsion of indigenous Palestinians has developed into an institutionalized regime that systematically entrenches Palestinian subjugation, facilitates Zionist colonization, and denies Palestinians their right of return.

Settler colonialism and apartheid, as mutually reinforcing frameworks, allow us to make sense of the systematic policy to drive Palestinians from their homes. Zionism’s underlying “logic of elimination” has underpinned the ongoing Nakba since 1948: what began with the mass expulsion of indigenous Palestinians and the wanton destruction and looting of their homes, cities, and villages, has developed into an institutionalized regime that systematically entrenches Palestinian subjugation, facilitates Zionist colonization, and denies Palestinians their right of return.

Israeli apartheid and the ongoing Nakba

The displacement and dispossession of Palestinians and their replacement with Israeli settlers are core components of Israeli apartheid, which is embedded in the logic of Zionist settler colonialism. Israel’s apartheid regime has gained mounting recognition in recent
years.*17 It is built on the legal, political, and geographical fragmentation of the Palestinian people as a whole. Through fragmentation, Professors Richard Falk and Virginia Tilley explain, Israel “obscure[s] this regime’s very existence”*18 and denies Palestinians any collective rights, including to return and self-determination.*19

Palestinian scholars have exposed the racial underpinnings of Zionist settler colonization long before today’s discussions on apartheid.*20
Early analysis on Israeli apartheid, notably by Palestinian scholar Fayez Sayegh, referred to the legal regime put in place to subjugate Palestinians following 1948 and to Judaize the land.*21 This regime remains in place seven decades into the ongoing Nakba. In 1979, Richard Stevens concluded that in Palestine as in apartheid South Africa “the alienation of the indigenous peoples from the land has occurred as part of the pattern of establishing and maintaining a settler state.”*22

In Jerusalem, Palestinian transfer is escalated through house demolitions, discriminatory planning, denial of building permits, forced expulsions by the Israeli occupying authorities and Israeli settler organizations, the revocation of residency rights, and other forms of arbitrary displacement entrenching apartheid.*23 As a result, Palestinians are systematically fragmented through physical and other less visible barriers: the Wall and Israeli checkpoints cut through east Jerusalem neighborhoods, Jerusalem is isolated from other parts of the occupied Palestinian territory, and Palestinians with different legal status are systematically denied their right to family unification, including in Jerusalem.


In 2016, Rinad Abdulla argued that “[t]he hegemony over the legal and political discourse will continue to have disastrous implications for Palestinians… unless the framework is expanded to include the entire Palestinian population as a whole, rather than a piecemeal analysis of certain groups of Palestinians and certain territories of historical Palestine in fragmented discrete units.”*24 Addressing Israeli apartheid requires us to understand Zionism’s settler colonial “logic of elimination,” to move beyond the partition of Palestine and division of Jerusalem, and thus to examine the plight of the entirety of the Palestinian people.

*17 See, for example, Al-Haq, “Global Response to Israeli apartheid: A call to the UNGA from Palestinian and international Civil Society Organizations” (September 22, 2020) <https://www.alhaq.org/advocacy/17305.html>.

*18 ESCWA, Israeli Practices towards the Palestinian People and the Question of Apartheid Palestine and the Israeli Occupation (2017) UN Doc E/ESCWA/ECRI/2017/1, 37.

*24 Rinad Abdulla, “Colonialism and Apartheid Against Fragmented Palestinians: Putting the Pieces Back Together” (2016) 5 State Crime Journal 51, 74.