Palestinians have been denied access to their water resources. This fact is well-documented in reports by international organizations that include the World Bank, Amnesty International, the United Nations, and many others – among them Israeli organizations.*1

Palestine shares surface water with other riparian countries of the Jordan River Basin. Considered an international water basin, it is formed by the three tributaries (Dan, Banias, and Hasbany) that form the upper Jordan River. The Jordan River expands to form Lake Tiberias and then flows south until it meets the Yarmouk River, forms the lower Jordan River, and eventually discharges into the Dead Sea. Since 1967 and Israel’s occupation of the West Bank, Palestinians have not been permitted to reach the river or obtain their rightful share of it, namely an estimated 250 million cubic meters (MCM) of water from the basin and the river itself. 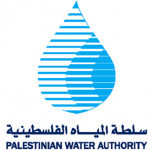 
Water rights are an important issue of conflict between Israel and the Palestinians. While Israel has recognized Palestinian water rights, it has postponed the issue of defining and reallocating shared resources to the permanent status negotiations – that are unlikely to take place anytime soon. Under the Oslo Agreement, the Jordan River and the Coastal Aquifer were not allocated, and Palestinians were given access to only 15 percent of the Mountain Aquifer and 118 MCM from wells and springs, while Israel uses and controls 85 percent of the three aquifers located underneath the West Bank. Article 40 of the Oslo Agreement stipulated that the so-called Joint Water Committee (JWC) would oversee water and sewage maintenance. But as Palestinians are forced to present all water and sewage projects for Israeli approval, the JWC has played a major role in restricting the water sector development, in particular the drilling of water wells and the construction of sewage treatment plants.

Denied water rights, water-related conflicts, and the occupation have shaped the water services in the occupied State of Palestine.

Palestinian projects have even more obstacles to overcome: Under the Oslo Accords, the West Bank was divided into areas A, B, and C, with Area C comprising 61 percent of the West Bank. As Area C lies under the sole jurisdiction of the Israeli Civil Administration, another layer of control and restriction is imposed on Palestinians. Thus, even when the Israeli side of the JWC approves a Palestinian water project (which can take years or decades), so-called construction permits must be obtained for projects to be implemented in Area C. This requires that the Palestinian project pass through 14 departments to gain approval, and any department rejecting such approval means that there is no project implementation. Under such restrictions, no comprehensive master plan for water management has been developed in the past 28 years.


Likewise, water transfers between governorates have not been permitted. So while water is available in Qalqilya and Tulkarem, Israel has never permitted a transmission line from these governorates to Jenin, for example, to ease the area’s grave water shortage. The pretext is that water pipes would pass through sections of Area C which in many cases are considered for the expansion of settlements (illegal under international law) or for natural reserves – or planned for confiscation. In the Jordan Valley, Israel has rejected a Palestinian plan to transfer part of the water of the Palestinian Fashkha springs group (estimated at around 200 MCM) to the Jericho areas for irrigation purposes, with leftover water running into the Dead Sea. Moreover, Israel has in many cases destroyed water cisterns, restricted access to water resources, and delayed the approval for water and sanitation projects as a means to maintain control – and force the evacuation of Palestinians from their lands. Such practices are ongoing.

In 2014, a new water law was issued by presidential decree.

In 2020, the amount of water available to Palestine was estimated at 448.4 MCM, of which around 90 MCM were purchased from Israel, around 190 MCM were pumped from the Gaza aquifer (50 MCM are considered safe, which means that 140 MCM were over-pumped in the Gaza Strip, where the water is highly saline and polluted), 5.7 MCM were produced from small desalination units installed in Gaza, 108.8 MCM were abstracted from Palestinian wells in the West Bank, and 53.3 MCM were pumped from springs in the West Bank. The desalinated drinking water produced in 2020 in Gaza came from small desalination plants where the daily capacity varied between 6,000 and 20,000 cubic meters. It should be noted that only 3 percent of Gaza’s pumped water is fit for human consumption because the aquifer is hugely over-pumped, highly polluted with sewage, and highly saline due to seawater intrusion. Moreover, according to data of the Palestinian Water Authority (PWA), the aquifer’s desalination percentage shall rise significantly with the implementation of the central desalination plant program.*2

In 2020, the daily allocation of water per capita for Palestinians was less than the internationally recommended rate of 100 liters/capita/day (World Health Organization [WHO] standards). This per capita daily allocation of water consumed for domestic purposes is 84.2 liters/capita/day in Palestine: 82.4 l/c/d in the West Bank and 86.6 l/c/d of very poor-quality water in the Gaza Strip.*3 In the West Bank, there is a discrepancy between various governorates regarding the daily allocation of water per capita, with Jericho residents receiving around 211 l/c/d, while Ramallah residents receive 116 l/c/d, and others between 50 and 70 l/c/d, as in Tubas, Jenin, Hebron, and Bethlehem. In some rural areas, the per capita amount does not exceed 20 l/c/d.*4 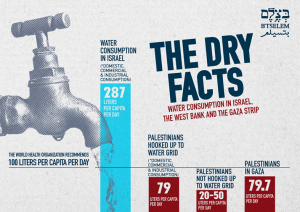 While the connection to a water supply in the Gaza Strip is universal and in the West Bank varies between 94 and 97 percent of water users, the percentage of households that are connected to sewerage networks is much higher in Gaza than in the West Bank. In Gaza, access to improved sanitation is universal, with 78 percent of the population connected to sewerage networks and the remainder relying on on-site services. In the West Bank, despite near-universal access to improved sanitation (94 percent), the access to sewer connections is only 30 percent, with rates varying widely by governorate: from 0 in Tubas to 59 percent in Qalqilya.


When a 2009 audit of the water sector showed serious mismanagement, a reform program was implemented that produced the new water law, endorsed in June 2014.*5 It restricted the PWA to its ministerial functions and the regulation of water resources, stripped it of the regulation of service providers, and created the Water Sector Regulatory Council. Thereby, it paved the way for the establishment of regional utilities that are planned to eventually replace the hundreds of local service providers (mainly municipalities and village councils) that are currently providing the services. Four regional utilities, three of them in the West Bank and one in Gaza, have since engaged to improve the water supply and the provision and accountability of sanitation services. In particular, they separate water accounts from other accounts and ensure that income generated by water goes to water service provision only. In addition, the law has addressed the bulk supply and turned the West Bank Water Department (WBWD) into a national company that works on a commercial basis to assure at least cost recovery. Furthermore, the law regulates the reuse of treated wastewater and prompts the creation of water user associations, mandating the PWA to draft the necessary bylaws and overall supervision of the sector.

A new bylaw that regulates the tariffs for water supply and sanitation was endorsed in 2021. It establishes the rules and regulations that the Water Sector Regulatory Council (WSRC) must refer to whenever it approves the water tariffs in various localities. The price of water varies everywhere in the West Bank and Gaza. In areas that are the richest in water, such as Tulkarem, the owners of wells sell water to service providers at NIS1 or less per cubic meter, whereas the service providers resell the water for tariffs that range from NIS1 to NIS9 per cubic meter. When water is sold and distributed through water tankers, the price goes up to NIS10–20 per cubic meter or more, depending on the cost of transportation (fuel of tankers) that is added to the price of the water.*6 Tariffs in both the West Bank and Gaza are generally low. In Gaza, they cover only two-thirds of the costs, and service providers usually collect only 37 cents on each dollar of sales, with the result that the average service provider covers less than 24 percent of its costs. In the West Bank, the average tariff barely covers operating costs, as service providers collect only 68 percent of the issued bills and only 76 cents on each dollar of cost. In addition, collection rates are very low (68 percent of customers pay their bills, on average). Thus, tariffs barely cover the operation and maintenance costs and make no provision for depreciation.*7


According to the WSRC, water and wastewater services are currently being provided by over 280 water service providers in Palestine that differ substantially in terms of institutional structure. They include the water utilities of local authorities (municipalities and village councils), joint service councils, private-sector service providers, and water user associations. The WBWD is the bulk water provider in the West Bank, distributing to the majority of water service providers who have no water resources of their own. In Gaza, the Coastal Municipal Water Utility (CMWU) serves as both a regional service provider and a bulk supplier to other municipal sub-providers, while about 24 municipal departments serve the Gaza Strip. According to the WSRC, water service providers in Palestine operate under varying institutional, administrative, operational, and financial conditions, and significant differences are found in terms of service areas, the availability and nature of water resources, operational costs, financial resources, etc.

It should be noted that the PWA has reported water losses of 32 percent in the West Bank and around 47 percent in the Gaza Strip, totaling 92 MCM in 2019 out of 238 MCM supplied for domestic use. Thirty-nine percent of general losses in water supply – whether due to leakage, unaccounted water, or theft – pose a huge problem that must be addressed. In terms of revenue, the losses are estimated at around US$82 million yearly. A reduction of water losses will also increase the per capita allocation. Efforts to alleviate the problem must address transmission lines (as water network leakage varies from 30 to 60 percent), faulty water meters and incorrect readings, as well as illegal connections and water theft.

In 2020, in accordance with the 2014 Water Law, the government established the Palestine Water Company, giving a new name and status to the West Bank Water Department. Currently, its biggest challenge is how to deal with WBWD debts that have reached around NIS1.6 billion. Thus, the company’s board of directors must address the sale of water to service providers. Currently, the cost of production, including the operation and maintenance of wells, in the West Bank surpasses the incoming revenue, with the government covering the difference because raising the cost of water for consumers is a problematic issue.

The treatment, discharge, and reuse of wastewater and reaching an agreement on Israeli deductions are big challenges that face the water sector

In 2017, the PWA estimated that Israel treated 18 MCM of sewage (4 MCM from Tulkarem, 3 MCM from Qalqilya, 5 MCM from Hebron, and 6 MCM from Bir Nabala, Al-Ram, and Beit Jala) and deducted from the Palestinian government’s clearance revenues NIS111 million, at an average cost of more than NIS6 per cubic meter. PWA has estimated that the annual losses for treating sewage in Israel amount to around NIS131 million (in addition to the opportunity cost of reuse because Palestinians are not allowed to establish their own treatment plants). These deductions take place without any regulation due to the lack of a sewage protocol.

*5 The New Water Law superseded any other laws, in particular the local government law of 1997 that mandated water and sanitation to municipalities and village councils within their boundaries, creating immense challenges for the PWA until now. See President of the State of Palestine, Decree Relating to the Water Law, June 2014, available at http://www.pwa.ps/userfiles/server/water%20sector/New%20Water%20law%202014%20-%20English.pdf.

*7 “Securing Water for Development in West Bank and Gaza.”

*8 “Securing Water for Development in West Bank and Gaza.”

*10 “Israeli Discounts for Wastewater Treatment 2000– 2015” (in Arabic), Water Sector Regulatory Council, Palestine, 2016, available at https://www.wsrc.ps/publications (under the category “Other”).