The largest DISCO in Palestine is the Jerusalem District Electricity Company (JDECO) that operates the distribution grid in the central governorates of the West Bank, serving Jerusalem, Bethlehem, Ramallah, and Jericho. Founded in 1914, JDECO today feeds more than 50 percent of the demand and purchases more than 40 percent of the supply in Palestine’s electricity sector. The company is a pioneer in adopting advanced technologies such as smart grids, information technology, and innovative administrative systems. However, JDECO has been and remains under pressure from the Israeli Electricity Company (IEC, the main supplier of electricity to the DISCOs) while suffering from high commercial losses, caused by fraud and administrative errors, as well as customer nonpayment.

Palestine obtains its electricity from Israel (92 percent), Jordan, and Egypt, supported by domestic generation through solar photovoltaic (PV) plants (contributing 4.1 percent of the gross consumption) and Gaza’s power plant (contributing around 140 megawatts [MW]). Over the past three years, the gross annual consumption has ranged from 7,060 gigawatt hours (GWh) to 7,726 GWh. During the same time period, four high-voltage 161 kilo volts (kV)/33 kV substations were commissioned, with a total capacity of 585 MW, all of which are managed by PETL. The energy distributed through these substations constitutes 1,553 GWh or 22 percent of the total gross consumption in the West Bank, according to 2021 statistics. The total power capacity of all West Bank connection points (including PETL connection points) is 1,500 MW.*1

Renewable energy is seriously underdeveloped in Palestine, not least due to Israeli restrictions on building in Area C, the main space available for such projects.

In the Gaza Strip, the Gaza Electricity Distribution Company (GEDCO) operates the entire electricity distribution system. Gaza suffers from a severe shortage of electricity, as the capacity from the three sources (IEC, Egypt, and Gaza’s power plant) reaches a maximum of 290 MW – which meets only 45 percent of Gaza’s demand.

The electricity sector in Palestine differs from that of other countries in the region in several aspects: First, the Israeli occupation hinders the implementation of Palestinian development plans such as the building of transmission corridors or the establishment of grid link continuity between West Bank cities and with the Gaza Strip, while expediting similar plans for Israeli settlements. Second, there is a lack of Palestinian control over the entire West Bank, especially in Area C, which impedes the government’s plans to exploit natural energy resources in these areas such as solar and wind energy sources. This has heavily confined the potential for building utility-scale solar photovoltaic plants in Palestine. Third, the irregularity in energy demand, due to the abnormal consumption driven by nonpaying customers and/or electrical power theft, poses a major challenge for efficient planning regarding the development of the sector and affects the cost of infrastructure development. Fourth, the debts accumulated by DISCOs, due to customer nonpayment, are leading to their inability to cover their monthly purchases from the IEC. This constitutes a burden on the state treasury because the Israeli government deducts these debts from the taxes and customs collected for the Palestinian Authority.

According to the energy balance report prepared by the Palestinian Central Bureau of Statistics for the year 2020, electricity consumption was distributed as follows: households consumed 68.75 percent, commercial enterprises and services consumed 22.33 percent, industry consumed 8.42 percent, and agriculture 0.5 percent. The total amount of energy consumed in Palestine was 7,360 GWh. However, because the 2020 statistics were impacted by the closures related to the covid-19 outbreak, the 2019 data provide a more comprehensive representation of the sector: households consumed 59 percent, commercial enterprises and services 29.4 percent, industry 11 percent, and agriculture 0.6 percent, with total consumption amounting to 7,060 GWh.*2 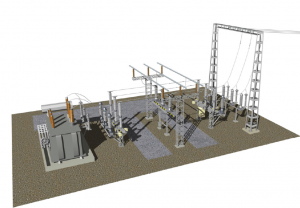 Palestine’s demand for electricity has an accelerating growth rate of around 6–7 percent, despite the high price of imported energy. Thus, a national program for energy efficiency was initiated by PENRA in 2022. It aims to shrink the demand growth to 4–5 percent through energy audits for industrial establishments and government institutions in addition to raising citizen awareness of ways to save energy in households.

Annual gross consumption and peak demand in Palestine, 2019 to 2021

The annual consumption per capita for the year 2017 was 1,300 kWh while in Israel it was 7,000 kWh. These numbers reflect the acute difference in GDP between Palestine and its occupier.

DISCOs and PETL are constrained by the prices set by the Israeli regulator, which are considered the highest in the region. In comparison with January 2022, electricity rates will increase by 20 percent at the beginning of August 2022. The average price for one kWh to the Palestinian end user is expected to exceed US$0.17.

Renewable energy is an underutilized source in Palestine. The lack of electrical grid independence and the disintegration of the various distribution systems across Palestine have imposed technical limitations on the development of utility-scale PV solar energy plants. Infrastructure investments in Palestine have always been obstructed by the Israeli occupation authorities for political reasons. The construction of transmission lines to link Palestinian cities will warrant sufficient evacuation routes*4 for renewable energy plants and battery storage technologies in order to uplift their potential.

As it stands, the capacity of installed solar photovoltaics is approximately 178 MW peak (out of a total capacity of 1,500 MW). The renewable energy production has accounted for 4.1 percent of the annual gross consumption for the year 2021. Within this context, PENRA’s 2022 plan targets a 5 percent contribution of solar photovoltaic plants to the annual gross consumption. In order to reach a 10 percent contribution to the gross consumption by 2030, the installed renewable energy capacity should reach 800 MWp.

To meet the growing electricity demand, the electricity sector should adapt as follows: In order to improve the transmission, another four high voltage substations must be built, green and transmission corridors must be implemented in the West Bank, and a link with the Gaza Strip should be established. To facilitate the distribution, the distribution system must be reinforced to minimize technical losses. Better connections to neighboring countries must be achieved by upgrading the connection point with Jordan from the current 80 MW to a capacity of 160 MW, and commissioning new connection points with Jordan (400 kV) and Egypt (220 kV). Finally, the generation of electricity must be improved by building two conventional power plants with a total capacity of 600 MW in the West Bank, constructing utility scale solar PV plants, and upgrading the capacity of Gaza’s power plant. All these targets will diversify Palestine’s energy sources and significantly reduce Palestinian dependence on Israel (from currently 90 percent to less than 50 percent). 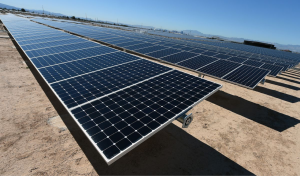 The future of the electricity sector in Palestine, as envisioned above, is challenged, however, by the political landscape that does not support the establishment of an independent Palestinian state.

*1 Statistics and information regarding the Palestinian energy sector is also published by the Palestinian Central Bureau of Statistics, “Annual Energy Tables and Energy Balance: Annual Statistics,” PCBS, available at https://www.pcbs.gov.ps/site/886/Default.aspx.

*3 The peak demand represents the maximum consumption power (rate of consumption) reached during each year. This is important because it needs to be matched by the connection points’ power capacity to prevent outages and interruptions.

*4 Evacuation routes mean that energy generated from solar PV plants can be transmitted and then distributed effectively, with acceptable losses. Transmission lines, which operate at a higher voltage (161 kV+), decrease the losses significantly over long distances.

*5 This forecast was performed by taking into consideration the national energy efficiency program, a reduction of losses to acceptable ranges (less than 15 percent), and the securing of the electricity needs for the Gaza Strip.