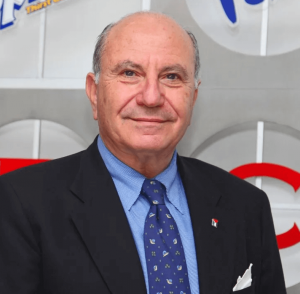 When we identified Zahi Khouri as TWiP’s Personality of the Month for January 2022, we asked Zahi: “Who would have a comprehensive enough knowledge of your life to write the article?” His reponse? “No one!” And so we’ve gathered a number of perspectives to create as full a portrait as possible.

Zahi Khouri is one of a kind. He might be best known as a successful businessman, yet he is a Palestinian refugee who had to flee to Lebanon from Jaffa in 1948 and who was able through hard work and against all odds to excel in business wherever he went: Saudi Arabia, Latin America, the United States, and finally in his homeland, Palestine. Living according to mantras such as “Life does not excuse the fainthearted” and “Diamonds are made under pressure,” his ability to build, cultivate, and expand networks is unique. Like no other, he has been able to build strong relationships not only with the Palestinian and Arab business communities but also with politicians in diverse countries such as Palestine, Jordan, Lebanon, Saudi Arabia, and the United States, to name a few. His extraordinary flexibility enables him to move within the various communities of business, politics, and culture. Yet, in addition to work and wealth, Zahi masters the third “w,” which is wisdom. He has a special gift in mentoring the people he works with, giving advice, and lending a helping hand when necessary. Another skill he has mastered is time management: not only is Zahi always on time for meetings and appointments, but despite his busy schedule he always finds time to meet friends, volunteer at NGOs, chair boards, and invite guests for lunches and dinners. Last but not least, Zahi genuinely loves his homeland Palestine and his people. He does not repeat political slogans but serves 24/7 and without much noise as an advocate for Palestine’s liberation from occupation.

I have known Zahi Khouri since 1993, when he was one of the first Palestinian businesspersons to arrive in Palestine after the Madrid peace process and the Oslo peace deal. He was literally the first one to move from his comfortable life in New York to settle eventually into a house he bought in the Old City in order to send a message to his peers. I got to know him well because I oversaw the development of the Palestinian private sector at the Orient House under the late Faisal Husseini. The strategy then was to attract diaspora business leaders to return home, enticing them to partner with their counterparts in the West Bank, Gaza, and East Jerusalem to build the nascent state that was being formed under the Oslo process. Mr. Khouri did not come back looking for comfort or wealth, he had enjoyed these conditions back in New York. He came back to support his homeland and his compatriots. While he helped set up many of the corporate entities we see today active in Palestine, he has never stopped working for the collective, the country, because he knows well that for a country to be independent politically it needs to be independent economically – and that our youth have to find dignity and jobs in Palestine.

Mr. Khouri is the best at connecting with global leaders, media tycoons, Hollywood stars, congressmen, and US and European political leaders. In fact, I used to call him a one-man PR machine for Palestine. He has the best connections and takes every opportunity to host high-powered figures in his Old City home that plays a central role in lobbying and advocating for Palestine. We worked together with private sector leaders to promote Palestine at the World Economic Forum MENA Summits, starting with Casablanca in 1994 and ending with many rounds in Davos. We spared no effort to receive delegations at home, and Mr. Khouri was part of a permanent group of business leaders who traveled twice a year to advocate for Palestinian rights with the US administration and Congress. He spent more time on these voluntary national missions than on taking care of his commercial interests.

Mr. Khouri is also a silent philanthropist, whose donations support many causes without publicity or fanfare. He is always worried about the future of the younger generation in Palestine and promotes the ideals of good governance and of ethics and professionalism in managing business, having high hopes for the Palestine to which he returned in the 1990s. He is someone who deserves to be recognized even with the simplest of gestures. We know Mr. Khouri will continue to work for the country he loves and support its people because the mission is not yet over.

Zahi Khouri is a founding member of the NGO Development Center (NDC) and served on its board of directors as chair for multiple terms. Under his leadership, and since its establishment in 2006, NDC has thrived, becoming a main national mechanism that provides technical and financial support to the NGO sector in Palestine and serving as a platform for the exchange of knowledge and information on best practices and standards. NDC has incubated several innovative development models that were replicated both locally and regionally. A strong promotor of good governance, transparency, and accountability, Mr. Khouri directed NDC within a very challenging context, gaining the respect of donors, partners, and civil society, and relentlessly enhancing the relationship and coordination with government counterparts.

Under Mr. Khouri’s support and guidance, NDC mobilized more than US$110 million to support more than 500 Palestinian NGOs in providing complementary social services to poor and marginalized individuals who live in the most disadvantaged and underserved communities, thus striving to improve the human rights situation in Palestine.

Mr. Khouri’s exceptional chairmanship and active engagement has helped NDC to take advantage of opportunities and grow into the credible institution it is today. He has been a key influencer in developing NDC’s policy, strategy, and direction.

Ghassan Kasabreh, director of the NGO Development Center since November 2006. 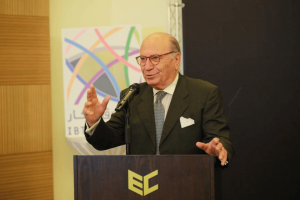 “Hello Ustaz Zahi… How are you? I wonder if you could assist in this case?” “Hey Ustaz Zahi, I wonder if you could financially support this institution or that one?” “Ustaz Zahi, what are your thoughts on the current American administration’s position on this particular issue?” “Good afternoon, Ustaz Zahi, Dr. Saeb Erekat would like to see you in 30 minutes, could you come over to our office?” “Good morning, Mr. Khouri, I know how busy you are as a member of the board of trustees of numerous organizations. Yet, can I ask you to accept the invitation to be a board member of Al-Ma’mal Foundation for Contemporary Art?” “Hey, Mr. Zahi, can I ask you to use your office to try to help in sorting out this problem?” “Hello, Mr. Zahi, I’m not sure where you are today – in Jerusalem, Amman, or the United States – but in any case, can you please get back to me?” In almost all situations, Zahi’s response and interaction on issues is timely, on the spot, and most of the time results in positive, professional, and serious engagement.

The management skills and the efficiency that Abu Rami has shown in all the cases I dealt with outside the circle of his business life have been amazing. Equally important is the wisdom he continually shows when giving advice. For those who do not know: Mr. Zahi Khouri made his fortune with hard work and perseverance.

When his family became refugees in the aftermath of the Nakba, it left behind its fortune, including a house in Al-Ajamiyeh Quarter in Jaffa. The misery of the Nakba, however, forged Zahi Khouri into a successful businessman, a man of dignity and honesty who extends his hand to those who approach him. Even when shaken by personal tragedy, Zahi has remained faithful, teaching us that God’s will always guides our path.

In my lifetime I have worked with several decent and patriotic leaders. Zahi Khouri is one of them and close to my heart, someone I highly respect.

H.E. Issa Kassissieh, Ambassador of Palestine to the Holy See and the Sovereign Order of Malta.