The ancient olive tree in Al-Walajeh, south of Jerusalem, protects the balance of history in this land of survival, Palestine. 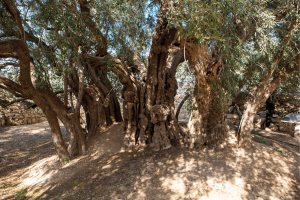 Al-Walajeh olive tree is a couple thousand years old, probably the oldest living thing in Palestine. Still standing, alive, and growing, it has witnessed all our glory and misery since the Romans – and maybe even beyond. It has survived the Babylonians, Romans, Byzantines, Crusaders, Ottomans, British, and Israelis, and is likely to outlive the next invaders in the current millennium. 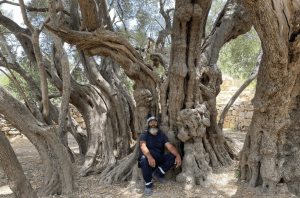 Its mother trunk – old, wrinkly, and wide, with a nine-meter diameter – supports 22 other smaller trunks that have sprouted from its roots. Thus, the ancient mother tree has a total diameter of 25 meters. Mother olive’s shade spreads over 250 square meters, enough to accommodate a crowd of several hundred people. She rises 13 meters into the sky and is very well taken care of by gray-bearded Salah Abu Ali, 49, who at all times treats it as gently as if it were his elderly mother. He built a stone wall around it, clears away the weeds and flying dirt, and waters it with a hose that is connected to a nearby spring. He lives all day under her canopy, talks to her, and perhaps imagines all the tales that have been told in this place. 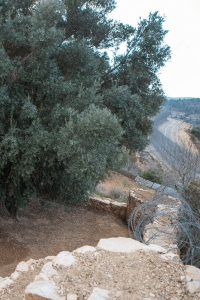 This month, mother olive will yield less oil than average, which at times can come to half a ton of very rich, deep-yellow, delicious olive oil. Sadly, mother olive is disturbed by the ugly scene of the adjacent, recently built five-meter-high shiny Israeli apartheid fence that cuts through the hills of Jerusalem. 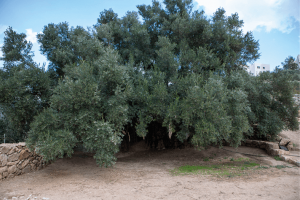 When you reach Al-Walajeh, west of Bethlehem or south of Jerusalem, descend the steep road into town and give Salah Abu Ali, the tree companion, a call at 059 516 5502. He will guide you to his beloved olive.