Available at the Educational Bookshop in Jerusalem or online through Kindle Amazon, 216 pages, US$16 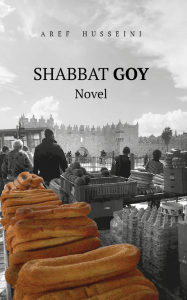 Shabbat Goy tells the story of Nabih, a young man growing up in the Old City of Jerusalem. Narrated from Nabih’s perspective, the story depicts his lack of choice in maneuvering bizarre situations, a few of which almost cost him his life. In an eclectic coming-of-age story, Nabih is alienated by the political slogans, artificial social classes, religious hierarchies, and an autocratic system that insists on turning him into a “Shabbat Goy,” the non-Jew who carries out services that Jews are not allowed to perform on Saturdays (Shabbat).

This sinister tale is written with dark humor, as it looks into the psyche of the Arab Jerusalemite experienced through the rugged shoes of Nabih. In an effort of survival, Nabih opts for cynicism as he strives to navigate his surroundings and the challenges they pose. His disorientation is reflective of the untold stories of the people in East Jerusalem. In Shabbat Goy, the search for what to do with suffering goes far beyond historical depression, it is about the future of those whose voices are deliberately dismissed.

The target audience for this novel is most likely those who are interested in the Middle East and the Palestinian-Israeli conflict and those curious about the delicate nuances of East Jerusalem. The novel transports readers into the lived accounts, natural conversations, and solo historical walks in the Old Holy City. The dynamic journey as represented in between the narrow streets, falafel joints, creepy cemeteries, and secret weapon burials all draw visual images about what it is like to live as an Arab Palestinian Jerusalemite amidst the social, political, and financial pressures in this complicated period of Palestinian history. 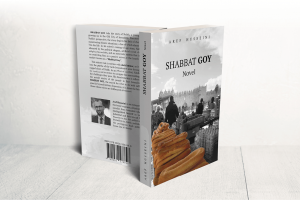 Parts of the novel are a fictionalized account of the author’s own life as an “East-Jerusalemite” who has lived through phases of the first Intifada, the peace negotiations, the establishment of the Palestinian Authority after the Oslo Agreement with Israel, and the eruption of the second Intifada. They reflect the general sense of loss and frustration in the absence of a political solution that has left East Jerusalem behind.

Aref Husseini is an entrepreneur, electronic engineer, physicist, and novelist from Jerusalem who has distinguished himself in various industrial and educational fields. He is also the author of two bestsellers in Arabic, published by the prestigious Arab publishing house Dar Al-Shorok.