Philanthropy is an endeavor that Palestinians have always considered their duty, a backbone of steadfastness that goes hand in hand with the struggle for freedom. In its crudest form, philanthropy is the giving of time, talent, and money. A cornerstone of Palestinian steadfastness, it is practiced spontaneously, with the conscious intention of doing good, occasionally without a label or a name. It is people helping people, contributing to families who lost loved ones or had their homes demolished, and assisting farmers in picking olives, as well as providing for neighbors and extended families when catastrophe attacks their lives. It is the faith that unites us Palestinians in our conviction that we can bring about a free and better future. Initially, the practice focused on giving to individuals in the confidence that this individual would support a family – as families form the core of society. This helped generations of youth exercise steadfastness, remain on the land, contribute to society, and live their lives as proud Palestinians. Giving in order to support steadfastness encouraged volunteerism, spread charity, and inspired further philanthropic giving.

Volunteerism, or giving time and talent, has been an ever-growing phenomenon in Palestinian societies. The 1980s are considered its golden era, with the inception of volunteer communities in diverse locations in Palestine and the birth of the first Intifada (uprising). Then, there were waves in which the practice was discouraged as a consequence of the Oslo Accords. With the influx of foreign aid, volunteerism started to be shaped by remuneration against voluntary hours, as practiced by international organizations. While this practice diverted volunteerism from its focus, there were always reasons to revive it. The decline of foreign aid to Palestine and the need for humanitarian support prompted people to rekindle their desire to drive social change. Nowadays, creativity in volunteerism is the backbone of youth activism in Palestine. Among such initiatives, there are youth groups that took the lead with trips to remote areas to volunteer by cleaning and fixing public space in villages and ordering homemade meals prepared by working women in the villages. Nonprofit organizations pride themselves on the number of volunteers who serve in their organizations and contribute to social change.

Acknowledging the significant role of volunteerism in Palestinian societies sheds light on the practice of giving that supports philanthropy and is essential for the communities.

Charity, or giving money and helping individuals, is a practice associated with faith in the three religions of Palestine. In Christianity, the tithe is set at 10 percent of income. Judaism espouses tzedakah and ma’sar kesafim (tithing), while in Islam, zyakat obliges individuals to give 2.5 percent of the wealth that has been in their possession for a lunar year. Charity correlates with humanitarianism. It is part and parcel of the support to Palestinians that has been essential in helping civilians survive attacks on their lives and the destruction and confiscation of their land and property. The Gaza Strip has been under continuous attack; civilians have faced dramatic human costs with losses of family members, jobs, homes, organizations, even hospitals. Basic needs such as food, shelter, and medical treatment have been supported by charity and humanitarianism. Charity makes a positive impact on supporting steadfastness – despite the fact that Palestinians resent the reasons that necessitate assistance and aid. Needing charity has never been a choice for Palestinians; it is enforced by the Israeli occupation and colonization of our land. Charity has served as the backbone of resilience, and giving has been based on motives grounded in faith and humanitarianism. Nevertheless, Palestinians are striving to overcome the need for charity while simultaneously endorsing a concept of charity that serves as a motive for sustained giving. 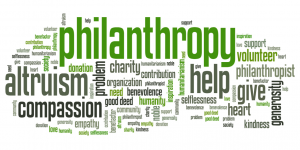 Philanthropy – giving to initiate change, giving to individuals, giving to causes – has been the main and preferred contribution of the Palestinian diaspora since the Nakba forced thousands into exile. Diverse forms of support motivate giving, with a priority given to building schools, universities, and hospitals, in addition to supporting families in their daily living. These forms were extended by establishing philanthropic institutions to sustain development in various communities. Foundations such as the Welfare Association (Taawon) were established to help develop Palestinian society. Philanthropy has supported families, individuals, communities, and organizations and serves people, helps build steadfastness, empowers resilience, and fuels the fight for freedom. Diaspora Palestinians have created little “Palestines” worldwide in the places of refuge that the exiles have created for themselves. They have contributed wholeheartedly to the Palestinian cause, raised their voices, and defended their position in the struggle for freedom and self-determination.

Then came the labeling and accreditation of who qualifies as a Palestinian and who owns the right to Palestine. This disease infected society and tainted the consciousness of ordinary individuals. The act of reaffirming “Palestine for all Palestinians” and healing communities places philanthropy in a leading position as a platform for participation, inclusion, and unity of vision – an imperative mission for sustaining hope. Philanthropic support given to organizations aims to sustain their small-scale projects that support the general cause of Palestinians, thereby creating work opportunities and helping families generate income, allowing them to lead meaningful lives and regain their dignity. Furthermore, such action helps youth resist the colonial force that aims to drive them out, helping them stay on the land instead of seeking a life far from home but free from the occupation.

Setbacks in the history of giving to the Palestinian cause, and their impact on our current situation, have caused us to doubt. But this doubt we must dissolve. Disengagement from giving is not a solution. Engaging in philanthropy is a mandate for regaining hope and for building the future that we pledged for ourselves, our children, and our youth.

Maintaining a healthy environment for philanthropy, providing the conditions that allow philanthropy to grow, and promoting an appreciation of philanthropy is everyone’s responsibility – which serves to sustain giving for Palestine and the Palestinian cause overall.

With the decline in foreign aid to Palestinians, the need for philanthropy is more prominent now than ever. Engagement in philanthropy that supports organizations, causes, communities, and individuals is fundamental to steadfastness, resilience, and the hope for freedom. Supporting Palestinians, wherever they live, is our common responsibility. Supporting displaced Palestinians is a duty that we all must uphold.  Everyone can give and contribute! Everyone can engage in philanthropy: by planning an annual giving agenda and giving, for example, 2 percent of one’s assets annually. Even small contributions make an impact, and that is key.

Organizations hold an immense responsibility towards philanthropy that can be met by creating giving platforms and ensuring transparency, accountability, and responsible spending. While trust is the anchor for philanthropy, it is generally missing in practice. To enable beneficiaries and donors to trust organizations, these need to follow best practices in philanthropic giving. Indeed, this practice is also growing in the East, not just in the West. In Asia nowadays, philanthropists are leading initiatives that change lives and help people out of poverty. But it is an obligation for all of us to maximize the impact of philanthropy. Organizations, communities, and individuals need to change their attitudes and cease taking philanthropy for granted. We share a common responsibility towards contributors and must achieve results, fulfill the promises made, and create an impact, whether these contributors are individuals or institutions.