Kifta bi-tahini is a lovely dish for a cold winter day in Palestine. In a kitchen that can be rather chilly here, where the houses aren’t well insulated, a warm oven is much appreciated. Tahini, a creamy, oily sesame paste, is mixed with lemon juice to become soluble in water, giving this baked meat dish a delicious, tangy flavor. In Nablus, tahini is produced the traditional way: in grinders that crush the sesame seeds between two stones. The mill still uses the same stones that were used in the past and that have holes in which wooden bars were placed. They were fastened to the backs of donkeys that turned them by walking in circles. Today, motors have replaced the animals in these modernized factories. 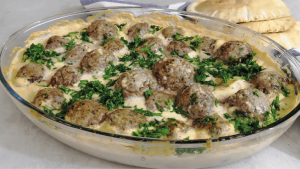 Mix the meat with the washed and chopped parsley, finely chopped onion, spices, salt, and pepper. Spread the mixture in a lightly greased baking dish and make a few dents across the meat’s surface.

Mix the tahini with the lemon juice until well blended. Add enough water to make it liquid; there should be enough to cover the meat to a depth of about 1.5 cm. Pour the sauce over the meat.

Bake at 175 degrees Celsius for about 30 to 40 minutes. Brown the pine nuts or almonds in a small amount of olive oil and sprinkle over the top. Serve with rice and a salad.

*The lamb meat can be mixed with beef or replaced by beef, chicken, or turkey.
For a vegetarian version, replace the meat with slightly undercooked sliced potatoes.

This recipe is an adaptation of a recipe in A Taste of Palestine: Menus and Memoirs, a cookbook by Aziz Shihab, the father of the award-winning poet Naomi Shihab Nye, who intersperses recipes of dishes his mother used to cook with delightful stories of Palestine in the mid-twentieth century.