Palestinian Youth Fight for Their Village 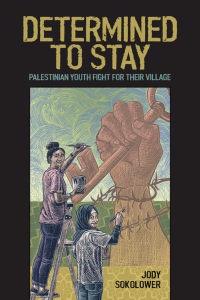 In Determined to Stay, author Jody Sokolower takes readers on a journey to Silwan, a Palestinian village located just outside the ancient walls of the Old City of Jerusalem. There, we meet Silwani youth and community members who share with us their lives and their struggle. Their candid stories show how Israel’s occupation affects every aspect of life there, from education and mental health to employment and family and beyond.

We hear about young men and women suffering from PTSD after being threatened by Israeli settlers and interrogated by occupying soldiers. We learn how hard it is for students to get to their schools, forced to make hours-long journeys through dangerous checkpoints and the apartheid wall. And we see firsthand Sokolower’s own experience travelling back and forth to Silwan over the course of seven years, and the havoc the Israeli expansion into the village continues to wreak.

Through it all, Sokolower approaches the storytelling in Determined to Stay with great empathy and care. Rather than being a narrator for the Silwani people’s stories, she becomes a propagator of their own truth in their own words, never forgetting her role as a Jewish woman and a colonizer herself in North America. Each chapter evocatively and movingly shows the routine dehumanization of Palestinians and forces readers to examine their own role in the segregation and displacement of Indigenous peoples around the world.

As Silwani youth and community members share their lives with us, their village becomes an easily accessible way to understand Palestinian history and current reality. Written with young people in mind, the richly illustrated text stresses connections between the lives of youth in the United States and Palestine: criminalization of youth, forced relocation, the impact of colonialism on Indigenous communities, efforts to bury history, and inspiring examples of resistance and resilience.

Maps, photographs, a glossary, and a powerful introduction by Professor Nick Estes, a citizen of the Lower Brule Sioux Tribe and author of Our History Is the Future, enrich the narrative and provide clarity and context for the stories within this compelling book.