The 460-meter-long As-Sahel Street crosses downtown Ramallah from north to south. It connects Main (Rukab) Street with Yaffa Street. For Hatem, a regular at Al-Inshirah (Enchantment) Café, the street is easy (sahel) compared to the fancy cafés on Tireh Street, and people are more outgoing and friendly. Here, the city’s narrative is composed. 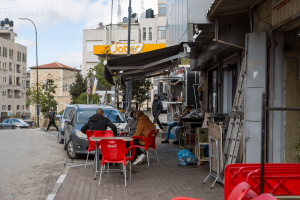 As-Sahel (the plain( has a variety of everything: The second-floor Succariya (Sugar Bowl) Coffee House, echoing the iconic novel of Nagib Mahfouz that bears the same name, features archaic balconies that overlook the busy street. Darna – a classy restaurant that is frequented by VIPs, politicians, and international dignitaries – is opposite Zarour, the corner convenience store with its orange beetle parked in front. In addition to old-style cafés and shops, you’ll also find a modern high-rise shopping complex in the making.

On Fridays, the street is packed with people who line up to buy hummus and falafel from the most famed Bandi, the oldest Abu Jamal, and the legendary Abu Imad restaurants. A little bit farther down, Ghawwar, the Syrian comedy actor, inspired the name of a tiny restaurant that serves all kinds of typical traditional breakfast dishes. On the other side, an Italian Segafredo café has recently opened.

In the middle of the street, a line of shops in an old building starts with the fast-food Chili Chili restaurant, famous for its hamburgers. Abu Issa, the owner of Reem Supermarket, welcomes you to his renovated modern-style store. He can tell you everything about this street, speaking with deep affection.

The butcher Salem invites you to have coffee (sada, without sugar) at his Ayyam Zaman (Bygone Days) butchery. Next to him is the Inshirah Café where people sipping coffee or smoking shisha sit around small tables on the sidewalk. At night, the café expands to take up all the parking spaces along the sides of the street and even on the opposite corners. The café welcomes guests from Ramallah and beyond, including writers, poets, critics, journalists, and youth, most of them smoking and playing cards. All share and enjoy the café’s friendly atmosphere.

On the sidewalk next to Old Ramallah Pharmacy, where the lovely smile of pharmacist Abu Hanna (or his colleague Abed) makes you feel better instantly, enjoy a cup of hot chocolate prepared by Yusef, the Espresso à la sidewalk – you can even pick it up while driving through – or munch on some potato chips from across the street at Miss Diala’s potato kiosk, an unforgettable taste of potato that satisfies small cravings anytime of the day.

I could go on and on telling you all about the street’s shops, cafés, and restaurants, as well as religious places. The Greek Orthodox monastery and the Catholic church and school are also located along this street.

As-Sahel Street has revived the old town and turned it into an urban, modern, Kreuzberg-style neighborhood, where its inhabitants’ alternative lifestyles enrich the street’s diversity. For lawyer and author Raja Shehadeh, As-Sahel Street represents “the transformation of Ramallah from an attractive, quiet town to a noisy, bustling city with sidewalk cafés, restaurants, and shops with fancy names and seemingly endless lines of traffic.”