Equipped with a bachelor of science degree in electrical engineering, obtained in 1983 from Middle East Technical University in Ankara, Turkey; a master’s degree in electrical and electronics engineering, obtained in 1987 from the University of Manchester; and a PhD in education administration, obtained in 2011 from Amman Arab University, Ziad Jweiles embarked on his professional journey guided by the belief that your mindset influences everything you see and do. The book Put Your Mindset to Work by Reed and Stoltz (2011) was his inspiration. 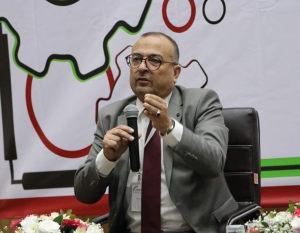 Proficient in Arabic, English, Hebrew, and Turkish, Ziad has held several senior positions that include head of the electrical engineering department, associate dean for academic affairs, and finally president of Palestine Polytechnic University, Hebron; branch director at the Jerusalem District Electricity Company–JDECO; project manager of the EU-funded Multipurpose TVET Center, and director general of technical and vocational education and training (TVET) at the Palestinian Ministry of Education and Higher Education. Currently, he serves as the executive president of the newly established National TVET Commission in Palestine.

Hisham Kuhail, Ziad’s lifelong colleague, calls him a humble, professional, and courteous person who loves knowledge, even craves after it. “He’s always smiling, listens well, and makes you feel that he’s learning from you while he argues and discusses matters with logic and respect for the other.” Kuhail furthermore points out that Ziad has always – even to this day – remained close to his students and co-workers whose respect he earns with his passion and work dedication.

Commenting on Ziad’s work as special representative of the International Labour Organization’s Jerusalem office, Mounir Kleibo asserts, “Dr. Ziad is a smart and talented person who is very good at his work. He is the best fit for overseeing vocational training at both the policy-setting and operational levels. With his extensive experience in the area of education and vocational training, he is respected as a main TVET expert in the region. Dr. Ziad’s widespread knowledge of skill development and lifelong learning principles as well as his familiarity with traditional and modern training methods and techniques were gained during his many years of service at both the governmental and private-sector levels, where he made an impact before he moved to the freelance world and became director of the Palestinian TVET development efforts.”

Ziad and his wife Yusra Abu Ajamiyeh (who holds a master’s degree in IT) are the proud parents of three boys and three girls: Osama (a civil engineer), Isra’ (a dentist), Doha (a dentist), Anas (a land surveyor), Roa’ (a third-year medical student), and Ahmad (a first-year student of construction engineering). In his free time, Ziad likes to read articles about health, healthy food, and history or watch documentaries that deal with international relations and the principles and interests that guide them.