Khalil Beidas, a teacher of literature at a school in Nazareth, together with close friends from the Al-Zu’bi family and others, established a national Christian-Muslim Association in 1922 that became the focal point of Palestinian nationalism in the town. As they worked against Zionist activities, Khalil’s 10-year-old son Yousef was always close to him, pencil and paper ready to take notes. This experience might have been the intellectual birth of a Palestinian economist who became very successful worldwide.

Yousef Beidas is a unique historical Palestinian personality, different from many of the Palestinian personalities that sparkled in the history of Palestine during late nineteenth century. With dedication and intelligence he blended business and economics with nationalism. His skills as an economist were so remarkable that Charles de Gaulle expressed the wish to have a man like him work as finance minister in France. 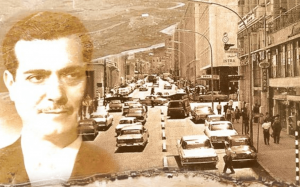 As young Yousef grew up and finished his schooling, he took on jobs in several financial institutions, including the British Barclays Bank and the Arab Bank, where he later became general manager. When the 1948 war drove Palestinians out of Palestine, he found himself a refugee in Lebanon, but as his mother was of Lebanese origin and his newlywed wife a Lebanese as well, he settled in easily. In Beirut, at the age of 36, he openeda a money exchange office with a starting capital of US$4,000, working in partnership with four friends. But foreign exchange was only the beginning. Soon after, he established Intra Bank, the institution that within a few years became one of the largest Lebanese banks.

Over a short time, Yousef managed to become a global banking magnate, effectively fathering the modern Lebanese economy. He established Lebanese Airlines, Lebanon TV, and Beirut Ports, in addition to dozens of other strategic projects that marked Lebanon’s golden period in the 1960s.

Yousef was motivated, shrewd, and always one step ahead. He continued to seize opportunities and meet challenges. Thus, he enticed businesspeople from Egypt and other countries to invest in Lebanon. In fact, in all his endeavors he strove to foster ventures and investments. Few know that he also established a major movie production company, aiming to make Lebanon the Hollywood of the East – similar to the Palestinian Talhami brothers who kicked off the cinema industry in Egypt in the early twentieth century.

Before long, Yousef’s reputation as a high-class banker spread internationally. Some Westerners called him “The Genius from Jerusalem” (al-maqdisi), admiring his fiscal intelligence. He bought real estate in New York and Paris and invested in shipbuilding in Italy.

Within the span of a few years, during Yousef’s midcareer, the bank achieved huge success, as the volume of its business increased from 5 million Lebanese pounds to 700 million Lebanese pounds (almost a quarter of a billion dollars at that time). He turned it into a financial empire that included about 40 operating branches spread throughout Lebanon and into many other countries, including Syria, Jordan, Iraq, Qatar, Sierra Leone, France, Germany, Italy, Britain, and the United States.

But the contemporary Lebanese elite did not like this growth at all, and it is reported that they conspired to bring him down. Indeed, an economic and business war took place in 1966. A sequence of well-planned events caused the collapse of the bank and the associated companies, proceeding through articulated hard currency deposit withdrawals that were made over a very short period of time. This crisis happened at the height of Yousef’s prosperity and without any prior warning. It was so severe that it overthrew the Beidas empire and the entire banking sector in Lebanon.

One important fact is that Beidas was the first Palestinian to donate a considerable sum of money to the newborn Fateh organization, founded by Yasser Arafat in the mid-1960s. Many believe that Yousef’s legendary economic stamina was an early harbinger of the Palestinian-Lebanese disputes of the 1970s. It is well accepted among historians that his collapse was due to the alignment of many rich and influential Lebanese families who feared that this stubborn Palestinian might endanger their thrones and thus allied together to wage a harsh economic war against him – impossible for him to win.

Yousef’s dreams of making Lebanon the Switzerland of the East vanished. He traveled to Brazil, but was pursued by the Lebanese government and returned to Switzerland. But life was harsh on Yousef, not only in business conspiracies but also health-wise. He suffered from pancreatic cancer and passed away at the age of 55.

Several theories have tried to explain what happened to Yousef. They include plots by the international Zionist lobby because he was the initial provider of financial support of the PLO. Others believe that the French acted out of fear that their business leverage was being threatened. But most sources confirm that political jealousy made this giant fall and bring down a great dream.