Asnapshot of how the world defines the Palestinian people would show nothing but tragedy, which is partly true. Indeed, the Palestinians have been expelled from their homeland and denied their history. And yes, they suffer from the betrayal of their friends who dumped them without mercy. But this should not be what defines the Palestinians. They should be recognized by their ability to rise from the ashes like the phoenix and thrive no matter what the world throws at them. They brush off the pain and lift themselves up, moving forward with optimism. The tapestry of the Palestinian people is woven with pain, ambitions, grand designs for a better life, and love for stability. An example of this can be observed in the strategies that Palestinian immigrants carried with them to the United States. With limited resources or support, they lifted themselves up by their bootstraps and forged a life of hard work and success. They not only fulfilled their dreams, they also became active contributors to the American dream and the growth of the United States. 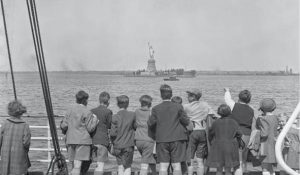 They took a leap of faith when they came to a foreign land with a foreign language, on a journey to seek economic security, and they ended up becoming an intricate part of their new community. Palestinian immigrants who arrived in my hometown of Detroit and its suburbs pooled what little money they had, borrowed from their families, bought household products, and began to peddle them door to door when all other doors were closed to them. Their aim was not only to make a profit but also to build a better life. When others saw only ghettos and destruction in parts of Detroit’s inner city, they saw opportunities. In the 1950s and ’60s they traded their peddling bags for plans to open small storefront businesses in various neighborhoods, sometimes in dangerous areas. Their keen vision, optimism, and entrepreneurial spirit became the salvation of both their families and the communities they served. Through trial and error, Palestinian immigrants kept their eyes on the prize, namely, empowering and educating their offspring to ensure that they have a more successful life. Their dedication paid off. Theirs is one of most educated and entrepreneurial communities in the United States. Their dreams of a better life and future success produced a generation of highly skilled individuals who currently impact the United States at the local and national levels.

Their forced separation from their homes and country gave Palestinian immigrants in the United States the impetus to seek a better education and fulfill their vision of a brighter future.

This complex yet carefully quilted Palestinian community has produced many business leaders who either own their own businesses or who form part of the Fortune 500 corporations. Among the people who are making an impact on the global economy is Johny Srouji. Mr. Srouji, a Palestinian-American, is responsible for the hardware technology for Apple. He runs the division that makes processor chips, the silicon brains inside the iPhone, iPad, and other Apple products. Bloomberg Business called him “The Most Important Apple Executive You Never Heard Of.”

From Apple to hair products, Palestinian engineers, entrepreneurs, educators, physicians, lawyers, and large- and small-business owners affect every aspect of the American and global economy. Among the giants of American industries is the humble Palestinian immigrant from Beit Ur al-Tahta, Farouk Shami. One cannot go into a retail beauty shop without seeing the CHI product, which was developed by Farouk Shami. This entrepreneur is the inventor of 23 beauty products, including the first ammonia-free hair colors and products. The owner of Farouk Systems, Inc., who was named the Entrepreneur of the Year by Forbes Magazine, came to the United States with only US$ 71 and is now is running a billion-dollar industry. His company employs 2,000 people, and its products are distributed in 144 countries.

Relying on their entrepreneurial spirit, Palestinian immigrants found ways to survive and make a living even when opportunities were scarce.

In the United States, there are only 30 national basketball teams. Among the successful owners is Tewfiq Georgious (Tom Gores), a Palestinian American who was born in Nazareth and nurtured by his uncles who owned a grocery store in Flint, Michigan. The billionaire and founder of Platinum Equity worked as a janitor while attending college and is now one of the most powerful people in Michigan and California. Aside from employing hundreds of people in his various businesses, he is known for his philanthropy. After acquiring the Detroit Pistons, he worked on ensuring the success of the team and made the decision to move his team from a suburb to Detroit in an effort to revive the city. He is partnering with other giant businesspeople to accomplish viable urban communities despite the economic struggles due to COVID-19 and other disasters affecting the United States.

Maha Freij does not own a business, but her impact on the economy is felt throughout southeast Michigan. This formidable Palestinian woman is a champion of the underdogs. Unlike any other chief financial officer and deputy executive director of a nonprofit, she created a vision of a future prosperous community and set the building blocks to achieve this dream by investing in the underprivileged. Since arriving in the United States, she has become a trailblazer with a commitment to her constituencies. Strategically, she began to partner with individuals from the Arab-American community and others and built a foundation that generated income for the poor for generations to come. She created the Center for Arab American Philanthropy, an institution that awards US$1.3 million to various programs, including scholarships. One can already see the change she created. 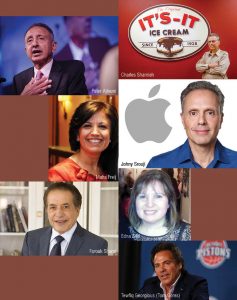 Like the successful people named above, the Shamieh brothers bought the It’s-It Ice-Cream Company when no one else would. They invested in its potential, modernized the operation, and expanded it. Their successful business employs thousands of people in Northern California. Their business model is used as a framework for long-term success.
Edna Zaid used her secretarial skills to build a multi-million-dollar agency. She was named by the National Association of Women as one of the Top 10 Women Business Owners. Her company, Regency Capital Holdings LLC, became the premier court-reporting company in the state of Michigan. She and the cadre of her employees built an impeccable reputation that relies on accuracy in reporting and transcribing. In her core business she employs 40 court reporters. In addition, Edna owns and manages multiple commercial and residential properties in Michigan and Florida, including four professional office buildings.

The engine of the US economy relies on the hope and commitment of people like the Ajluni family. Among its 3,500 members, they have more than 50 medical doctors, including Dr. Peter Ajluni, who was the president of the American Osteopathic Association, over 60 lawyers, numerous engineers and financial whizzes, such as Emeel Ajluni, a senior manager of external affairs and business development at Fiat Chrysler Automobiles, with a US$48 million budget to disburse in the community. The only unique aspect of this family is its number. The promise of America is built by the hard work and the dreams of many Palestinian Americans who want a better future.

Diversity in business, especially small business, is the backbone of the American economy. The Palestinian spirit is a great match for the American economic system. There are hundreds if not thousands of Palestinians who own their own businesses, from small mom-and-pop grocery stores to engineering firms, medical offices, insurance companies, franchised restaurants, and law firms. All these entities directly and indirectly pump revenues into their local, state, and federal economies.

From the first waves of immigration until now, most Palestinian-Americans have achieved and contributed to the economic growth of their communities.

Despite these successes, the Palestinian people believe they’ve only just begun. The genius of the young Palestinian generation supersedes that of their parents with their drive and passion for a better global future. Their potential knows no limit. They are driven by an obligation to build an inclusive economy that benefits the whole world. They want to build an environmentally clean and just economy. The halls of American universities are filled with people such as Mirna Kaafarani, a medical student who wants not only to become a doctor but also to specialize in research so that she can help eradicate diseases throughout the world. She believes that a healthy society is good for the economy. Like her parents, her brothers became engineers and were recruited by major manufacturing companies who value their commitment to excellence and work ethic. They dream that one day they can become the owners or executives of these major manufacturing companies.

The theft of Palestine has not killed the dreams, hope, or entrepreneurial spirit of the Palestinian people, and given that, the hope for a prosperous Palestine is still alive.