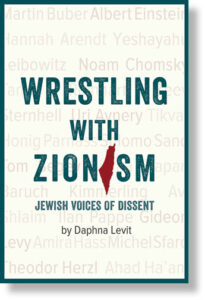 Daphna Levit’s Wrestling with Zionism is an invaluable study of the dissent that political Zionism has generated among Jews ever since its articulation by Theodor Herzl. Ambitious and comprehensive in scope…” —Carolyn L. Karcher, editor of Reclaiming Judaism from Zionism: Stories of Personal Transformation

“Portrayals of Israel in mainstream Western media as the ‘homeland of the Jews’ and ‘the only democracy in the Middle East’ are commonplace. Since the realities behind them are rarely shown, these truisms have become habitual assumptions underlying news coverage, public policy, and ordinary conversation. At the same time, while criticism of a government’s policies is considered an essential right and safeguard of democracy, criticism of Israeli policy is persistently attacked as anti-Zionist – or even anti-Semitic – by a majority of Israelis and by those outside the country who claim to be Israel’s friends. The views of independent Israelis and Jews who examine, challenge, or oppose extreme Israeli governments and policies are rarely heard.

“In Wrestling with Zionism: Jewish Voices of Dissent, Daphna Levit amplifies the voices of twenty-one Jewish and Israeli thinkers – scholars, theologians, journalists, lawyers, activists – who have grappled with the evolution of Zionism since its inception on political, religious, cultural, ethical, and philosophical grounds. Beginning in the late nineteenth century, well before the founding of the State of Israel, and surveying pioneering figures up until the present, she introduces, examines, and brings together a range of contrasting viewpoints into a single historical conversation. As well, with these portraits she honors a tradition of courageous intellectual inquiry and activism, rooted in Jewish ethical imperatives.”

The essays gathered in Wrestling with Zionism seek to examine, challenge, and oppose the extreme policies of the Israeli government and how it is handling its relationship with Palestine. Wrestling with Zionism attests that questioning Zionism is not new or outlandish but has been a part of the Jewish ideological landscape since Israel’s inception. This anthology of voices – including Ahad Ha’am, Martin Buber, Albert Einstein, Hannah Arendt, Yeshayahu Leibowitz, Noam Chomsky, Tanya Reinhart, Zeev Sternhell, Uri Avnery, Tikva-Honig Parnass, Shlomo Sand, Tom Segev, Ilan Pappe, Gideon Levy, Amira Hass, Michel Sfar, and others – enables readers to consider the relationship of modern political Zionism and Judaism in a revealing historical light.

Daphna Levit holds graduate degrees in finance (MBA) and East Asian studies (MA in economics) from Cornell University. She has contributed numerous articles in both Hebrew and English to various publications such as Ha’aretz and The Other Israel and is coauthor of Israeli Rejectionism: A Hidden Agenda in the Middle East Peace Process. She has also been active in Gush Shalom, B’tselem, Windows, Physicians for Human Rights, Makhsom Watch, Ta’ayush, and other peace organizations. She lives in Nova Scotia where she teaches courses at various academic institutions.