Integrated solid waste management considers waste prevention, minimization, generation, treatment, source recovery, and disposal as well as its impact on environmental, social, and health aspects, even years after final disposal. Many countries have achieved advanced status in waste treatment while others are still trying; some countries or cities are even considering a zero-waste concept. In some countries, such as Palestine, when the waste management system basically depends on mixed municipal waste collection transfer and disposal, some major problems emerge, particularly due to land scarcity or accessibility and difficult or restricted use of land for various reasons. 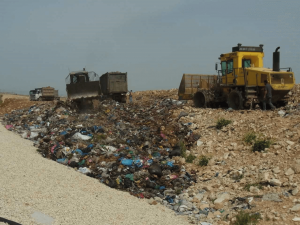 One of the solutions could be the use of waste-to-energy technology or incineration for energy generation, to totally or partially replace final waste disposal. Waste to energy is also an adaptation measure for greenhouse gas (GHG) emissions in Palestine.

Solid waste management is the responsibility of local governmental units (LGUs) and joint service councils (JSCs). Most LGUs and JSCs, including the government of Palestine, face financial difficulties. Seeking integrated solid waste management (SWM) also faces a number of challenges, primarily the capacity levels in disposal sites and landfills, and the scarcity and restricted accessibility to the needed land in what is known as Area C (areas under Israeli administrative control), far from residential areas. In addition, raising public awareness of integrated SWM is still in its initial stage and is far below the desired level in Palestine, particularly the needed environment for activation of the 3Rs (reduce, reuse, recycle) policies and practices, as major drivers of waste minimization.

Within this existing situation, the priority for JSCs and LGUs, as well as for residents and waste producers, is waste collection and transportation to focus attention on waste treatment and disposal methods.

In alignment with the Palestinian national strategy, significant efforts are allocated towards integrated SWM, e.g., improving collection systems, raising public awareness, and piloting recycling of some components of municipal waste. Addressing these issues is a slow and long-term process. Still, disposal of waste in landfills is a serious problem and satisfactory progress has not been achieved, compared to collection and transferring processes.

-Approximately 4,000 tons/day (1,400,000 tons/year) of municipal waste is generated in Palestine (West Bank and Gaza).
– The capacity of existing landfills is severely limited.
– Until the 3Rs (reduce, reuse, recycle) policy is activated, the incineration of mixed municipal waste can offer a solution.

We can simply say that we are in the red zone. Therefore, one of the probable methods to solve the problem of waste treatment is incineration, through which we produce energy and minimize disposed waste volume to less than 15 percent. In addition, incineration for energy production was considered to be one of the conditional mitigation actions to address national GHG emissions which is included in the national determined contributions of Palestine. Recent studies considered waste-to-energy technology as one of the best treatment approaches to reduce emissions.

Two main principles must be adhered to in waste management: polluters pay and cost recovery, which affirm that waste generators are expected to pay. Considering incineration as waste-treatment technology requires high investment and high operational cost, especially as we are working with low levels of income.

The State of Palestine is classified as a lower-middle-income country. Gross domestic product (GDP) per capita was less than approximately US$3,000 in 2018, and Palestine’s population is expected to increase from 5 million in 2021 to 9 million by 2050.

Until today, private involvement has been limited. Investors are still reluctant to pioneer this industry, even though there is a real opportunity to recover the potential resources in “waste” in Palestine. The government has taken advanced steps and issued a call for proposals, asking the private sector to invest in waste to energy; the call was processed but has not yet been awarded. This emergency action would deal with almost 100 percent of waste disposal of the municipal waste collected, particularly since the capacity of all sanitary landfills in Palestine (Zahret al-Finjan alminyah, Jericho, Johr al-Deik and Al-Foukhary, Deir al-Balah and Beit Anan) are approaching full capacity. In addition, the increase in random, illegal dumping of waste and illegal burning in the central area of the West Bank is leading to high levels of GHG emissions. This emergency action would offer an intermediate solution for the existing shortage in landfill capacity. Expanding the existing legal sanitary landfill sites is necessary to ensure adequate measures for minimizing methane emissions into the atmosphere.

Some studies even recommend waste to energy as one of the treatment technologies as a solution for municipal waste, replacing the total landfilling of waste. Still more studies are needed to determine the feasibility of producing electricity by incinerating municipal waste. An environmental and social impact assessment is needed to ensure that the infrastructure and technology for generating electricity from incinerated waste does not lead to a negative impact on the environment or on vulnerable communities.

Given the anticipated future challenges of land availability, it is expected that the government could be willing to provide concessional finance for future incineration facilities after the planned Zahret al-Finjan pilot successfully demonstrates its technology, leading to partial future dependence on local energy production in the West Bank and Gaza. 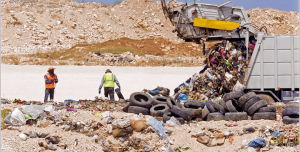 The planned pilot may demonstrate viability of waste to energy as a technology in the State of Palestine and provide a financial model that can be replicated. It will also reduce GHG emissions and contribute to the national determined contributions of Palestine. This pilot will drastically reduce wasted resources by fully deposing valuable resources into final disposal sites. Waste incineration for energy generation, replacing the currently used disposal method of either sanitary landfilled or randomly dumped waste is associated with reducing the environmental and health impact.

On the other hand, some basic prerequisites are needed, including strengthening waste and energy legislation to include the approval and regulation of waste-to-energy technologies and hence ensuring that future facilities are able to move through the governmental planning process and can be adequately regulated. Engagement with the waste and energy sectors is also critical to encourage future financing and the overall implementation of low carbon technologies.

To promote private investment and participation for the waste-to-energy facility, a series of institutional reforms is required, mainly, well-organized rules on tipping fees for incoming waste to the waste-to-energy facility which will be borne by LGUs and JSCs according to the volume of transported waste; and a feed-in-tariff rule for generated electricity, which will be guaranteed by the public sector (government) within a competitive setting with that of commercial electric supply. Based on these two revenue sources, investors can create a business plan that can recover investment funds and make a profit whose economic scale is worth at least several million dollars for a meaningful waste-to-energy facility. Currently, there are no clear rules or regulations on these two issues in Palestine, and such institutional reform is an urgent issue for developing a waste-to-energy facility under a public-private partnership mechanism in Palestine.