By Malak Hasan and Bisan Al-HajHasan

Have you ever come across small, domed, white-painted buildings, shadowed by old oak trees and situated on isolated hilltops, as can be found in many villages across Palestine? If you hike the picturesque Deir Ammar–Beitillu trail, you are guaranteed to see one of these beautiful Sufi shrines, known as Al-Nabi Ghaith Shrine. 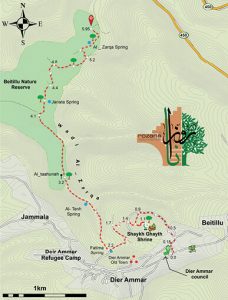 This lush and exciting six-kilometer hike kicks off in Deir Ammar village, 18 kilometers northwest of Ramallah. The starting point is the local village council of Deir Ammar. Leaving the building behind you and to your left, walk for approximately one kilometer to reach the first stop at Al-Nabi Ghaith Shrine, located on a high forest mountain known as the Mount of Spirits.

At 550 meters above sea level, the archeological site dates back to the Roman and Byzantine eras, whereas the shrine itself dates back to the Ottoman era.* It is easy to reach by following the village road signs. The shrine site is a renovated public park that is accessible by foot.
If you climb to the top of the mountain, you can enjoy a panoramic view of the entire area, including parts of Wadi al-Zarqa to the north. We spent some time studying the shrine’s unique structure and imagining what it must have been like for these saints – who in old folktales are frequently described as friends of God – to live in complete isolation. 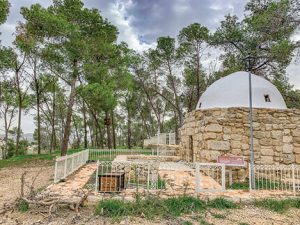 We then descended the mountain via the same route and turned to the left, circling its base until we reached a flat, unpaved road that is bordered by phragmites and other wild flora. In the distance, you can see Deir Ammar Refugee Camp to your left and the village of Jammala, which lies straight ahead. The path will lead you to the right, away from the residential area, towards Wadi al-Tawahin where the trail becomes flat and easy, marked with numerous trail signs in green and white. 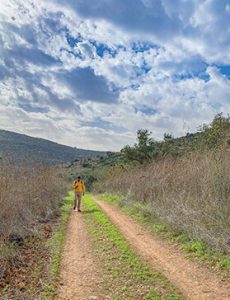 You will pass many water springs, such as Fatima Spring, also known as Ein al-Balad, and green farmland that stretches as far as the eye can see. And we are certain that you will enjoy exploring the cave in which Al-Tineh Spring is located; so make sure that your phone has enough storage to record the adventure and take photos of the majestic Roman trees and agricultural terraces along the way. 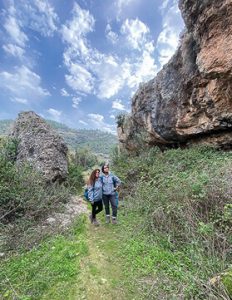 At the three-kilometer mark, you will see Al-Tahunah, a building that dates back to the Ottoman era. It is located on the border of the Beitillu Nature Reserve, which is considered a natural gem and celebrated for its biodiversity and rich water sources.

You will know that you are getting closer to Ein al-Zarqa (Al-Zarqa Spring) when you reach the open valley and walk to the right, following a narrow, unpaved path between the farmlands. We met many local farmers who greeted us and offered us fresh produce. Once you see the tall Eucalyptus trees, you will know that you are almost at the trail’s endpoint, Ein al-Zarqa.

We were very excited when we reached the spring, after having moved along the narrow path that was shouldered by huge grey stone walls and some caves. We found an old house and climbed its stone stairs to the roof and enjoyed the view in the shade of an oak tree.
This hike is considered easy to moderate and will take between two and four hours. We recommend hiking this trail anytime between September and early May, but to really enjoy its unique environment, the spring season is probably best.

Malak and Bisan are the founders of Ahlan Palestine, a travel blog that promotes tourism in Palestine. You can follow their adventures by visiting their social media platforms @AhlanPalestine.