By Nada Kitena and Michel Khoury

When one thinks of veganism, many images come to mind that might include an overpriced falafel burger in the café of a European capital or a Hollywood fad diet composed of uniquely sourced berries and seeds from different corners of the world. Whatever it is, Palestine or any other Arab country rarely comes to mind. After all, the United Kingdom’s Vegan Society in 1944 coined the word “vegan” by taking the beginning and ending letters from the word vegetarian to name the movement that protests the cruelty involved in the egg and dairy industries. But even though Arabic vocabulary lacks vegan vocabulary, centuries prior to the creation of the word vegan in the English language, history credits the eleventh-century poet Al-Ma’arri of Aleppo with the first vegan poem, titled “I No Longer Steal from Nature.” 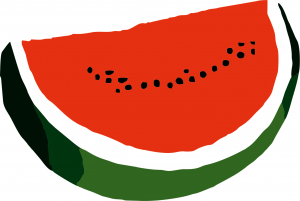 Centuries later, the word الخُضْرِيّ (al-khodri, derived from the Arabic word for vegetables, khudra), created by Palestinian vegan activist Sharbel Balloutine, entered the Arabic lexicon at the intersections of health and ethics. Moreover, despite the lack of vegan vocabulary, cultural and local religious rituals give evidence of Al-Ma’arri’s philosophy in Palestinian society. Thus, it can be argued that the inspiration for vegan Palestinian philosophy is found in folk music’s romanticization of our relationship with our land or the symbolism of plants in our cultural and political history. Such examples range from a Sliman Mansour painting to the watermelon’s allegory to the Palestinian flag. This imagery is also captured in the novel Mornings in Jenin by vegan Palestinian novelist Susan Abulhawa. Abulhawa writes, “[we] come from the land, give our love and labor to her, and she nurtures us in return. When we die, we return to the land. In a way, she owns us. Palestine owns us, and we belong to her.”

Vegan diets have roots also in the religious vegan fasting practiced in segments of local Palestinian society, including both the Islamic and Christian faiths. Every year, Palestinian Christians, like Christians from other parts of the Middle East, fast for forty days during Lent in preparation for the Great Feast. During this fast, followers are encouraged to adopt spiritual practices that include self-examination and lead to a spiritual connection with one’s body. For Muslims practicing the Naqshbandi Sufi school of thought, a vegan diet is recommended during Khalwa in order to reach spiritual enlightenment. Khalwa is a period of physical and mental isolation from worldly matters in which the faithful commit themselves to spirituality. The implication that eating vegan helps avoid sin and grow closer to God, as practiced in both Christian and Islamic traditions, raises questions regarding the ethics of eating animals and animal byproducts.

The impact of individual health on public health is raised regularly by plant-based and lifestyle medicine physicians. Besides the beneficial effects of good spiritual health on our physical health, a surge in nutritional research has revealed evidence in favor of a plant-based diet. Documentaries available on Netflix such as What the Health, Forks Over Knives, and Game Changers challenge the belief that meat and dairy are necessary or even beneficial for one’s health.


Palestine Health Save, a group advocating that locals embrace a diet of whole, unprocessed plant foods, hosts events to raise awareness on preventable diseases such as heart disease and type 2 diabetes. According to the Palestine National Diabetes Program, 15.3 percent of Palestinians are affected with diabetes, a number that far exceeds the worldwide prevalence of 6 percent.*1 In a World Health Organization protocol study, research has shown that Palestinian men and women in Jerusalem are twice more likely to die of heart disease than the population of other Mediterranean countries.*2 There is substantial evidence that besides an increased risk of developing diabetes, the dietary consumption of animal products such as meat, chicken, eggs, and dairy leads to an increased risk of high blood pressure and cardiovascular disease (including heart attacks and strokes) as well as the development of certain cancers and other diseases.*3 While medical conditions and the susceptibility to many diseases can run in families, family recipes and lifestyle habits are also passed down from generation to generation. For the creation of a healthier Palestinian society, a vegan plant-based diet not only offers a simple healthier path but can easily continue the culinary traditions native to Palestinian culture. For example, calcium is found in tahini, figs, various nuts, white beans, and chickpeas.*4 Protein, meanwhile, can be sufficiently obtained from lentils, chickpeas, nuts, and beans, amongst other food sources.*5 Moreover, foods that contain plant-sourced protein are preferable to those containing animal-sourced protein, given that plant-based food sources are likely also to contain more fiber.*6

Conservative estimates suggest that globally, 56 billion farm animals are killed every year for human consumption, a number that excludes fish and other marine life caught in nets. This means that more than 153 million animals are slaughtered every day.

Arguments raised frequently by non-vegan Palestinians point to Bedouin shepherds and family-owned chickens, suggesting that the environmental and ethical concerns raised by veganism do not apply as urgently in Palestine as in other parts of the world. These voices rely on nostalgia for the ways our ancestors lived prior to the Nakba. Palestinian folklore and oral histories paint imageries of a life in which families gathered to harvest the fruits of their land from which they have since been removed. While we still see a few Palestinian shepherds and small family-operated animal farms in Palestine, these practices are being replaced by large-scale factory farms in which animals live their lives confined to the same tight space with no sunlight or adequate hygiene and nutrition from birth to their death. A factory farm in Beita, Nablus, made its rounds through social media last year when a “technical error” resulted in the deaths of thousands of chickens. In the background of the video, surviving chickens can be heard chirping for their lives. Thus, the fallacy that factory farming is entirely an issue of “the West” to justify our animal consumption as more ethical or less detrimental to our health and environment is a myth that ignores the reality into which Palestinian consumerism has evolved over the past century.

Today, the search for plant-based options other than foul and falafel is futile in most Palestinian restaurants. Even traditional Palestinian meals prepared by families, including breakfast spreads such as hummus, and dishes consumed at lunches and dinners, such as ‘alayet bandora (editor’s note: tomato pans, see the recipe in TWiP’s March 2021 issue – which can easily be enjoyed without the eggs) or msakhan (caramelized onions served on a special bread drenched in olive oil, topped with nuts and spices), are now prepared with minced meat and chicken served on top. Historically, animals were slaughtered as a “sacrifice” a few times annually. Today, Palestinians include meat in nearly every meal every day, including carcinogenic deli meats for breakfast and snacks.*7

Specifically, over the past couple of decades, the Palestinian food economy has introduced imported cattle farmed in Brazilian factories that are complicit in the destruction of the Amazon rainforest. We also import the products of Nestlé and American fast-food chains that are among the world’s largest polluters. While air pollution is linked to increased rates of respiratory disease and cancer, general pollution can exacerbate already existing conditions and diseases. And none of this speaks to the ethics of harming and killing other sentient and living beings, regardless of the size of the farm or operation – especially because vegan staples and substitutes are readily available year-round in Palestine.

This past year and a half, the world has experienced the largest major global pandemic in nearly a century. While some countries in Europe and the United States have been able to reach their goals of a vaccination rate that nears 80 percent of the population, the Palestinian health system continues to struggle with its limited health infrastructure. Prior pandemics that made headlines for claiming the lives of millions of animals and thousands of people, such as H7N7, H1N1, severe acute respiratory syndrome (SARS), and Middle-East respiratory syndrome, originated from the farming of poultry, pigs, bats, and camels, respectively.*8 The ubiquity of COVID-19’s spread across continents has encouraged public health experts to speak of the connections between factory farming and pandemics in a globalized world. The United Nations published a report stating that the “vast majority of animals involved in historic zoonotic events or current zoonosis are domestic…, which is logical as the contact rates are high.”*9 Moreover, the squalid and cruel living conditions in which animals are kept frequently in factory farming and during transport lead to increased stress and weaken the animals’ immune systems. Weakened and stressed immune systems allow the virus to amplify within these animal hosts,*10 which creates the circumstances that give viruses a greater possibility to develop mutations that spread more easily to humans. With the ongoing industrialization of animal farming and the associated destruction of wildlife habitats, world health experts are not expecting pandemics to disappear. Rather, pandemics may become more common occurrences in our future – unless we cease breeding and factory farming animals and work to preserve our environment.

Did you know that veganism is thousands of years old? Philosophers such as Pythagoras and Al-Ma’arri practiced veganism in search of a more compassionate way of living. Not only is the vegan diet healthier, studies indicate that it helps combat climate change by reducing greenhouse gases and reducing water usage worldwide if adopted widely.

Despite the meat and dairy industries’ effects on climate change*11 and on physical human health, despite the overall animal cruelty involved in both small-scale and factory farming that includes separating mothers from their children, tossing male chicks to shredding belts, and ultimately the slaughter of living sentient beings, vegan activists remain hopeful. For Palestinian vegans, there is no doubt that with the influx of fried chicken restaurants and burger shops, there is also a rise in consciousness regarding the sources and ethics behind our meals. Palestinian stores are introducing new vegan foods and, although not fast enough, new Palestinian restaurants are creating menus that keep vegans and plant-based eaters in mind. A new group known as Vegan in Palestine holds bi-weekly vegan dinners and events that hope to create space for people to get together with others who share their values or are interested in learning more about vegan philosophy. The group also provides consulting services to local restaurants on how to incorporate more wholesome and vegan-friendly options into their menus. The members of Vegan in Palestine consider themselves as changemakers in both Palestinian and vegan communities and hope to see the fight for animal liberation alongside the struggle for the liberation of others. Vegan in Palestine’s driving philosophy is that the liberation of oneself cannot be complete without the liberation of all. Throughout our history, we as Palestinians have been known for our creativity and the ability to make the best of the worst situations. Our participation in the vegan movement is no different. Veganism is the future. It is about living life compassionately, in a way that minimizes harm to all beings and values life in all its forms. Veganism is growing, innovating, and improving the world, with Palestinians working at the forefront.

Note: Information in this article should not substitute specific medical advice provided by a personal physician. To stay updated on Vegan in Palestine, follow us at https://www.instagram.com/veganinpalestine/ and https://www.facebook.com/VeganInPalestine

*7 “Processed meat and cancer: What you need to know,” MD Anderson Center, available at  https://www.mdanderson.org/publications/focused-on-health/eat-less-processed-meat.h11-1590624.html

*8 “Covid and farm animals: nine pandemics that changed the world,” The Guardian,September 15, 2020, available at https://www.theguardian.com/environment/ng-interactive/2020/sep/15/covid-farm-animals-and-pandemics-diseases-that-changed-the-world.

*10 “Emerging Zoonotic Diseases: Should We Rethink the Animal–Human Interface?” Frontiers in Veterinary Science, available at https://www.frontiersin.org/articles/10.3389/fvets.2020.582743/full.