Once a rural police station built by the British during their occupation and opened in 1943, it became a Jordanian military headquarters until their defeat in the 144-hour war of 1967. When Israel occupied the rest of Palestine, it converted the place into a settlement. Jewish settlers moved to the site and made it their home until they were evacuated in 2005. 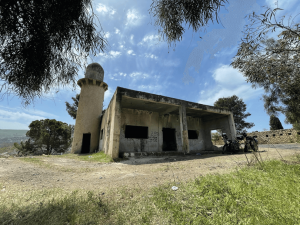 The compound, which the British classified as the second-class Tegart fort police station of Silet ad-Daher, is a rectangular building built with Jerusalem stone, and measures 40 x 60 meters east to west. A second floor with large arches was added to part of the northern side. The main entrance has wide stairs on the northern side, and there is another entrance on the eastern side, with a gate wide enough to allow vehicles to enter. There are more than 40 rooms in the compound and 2 open-air courtyards. 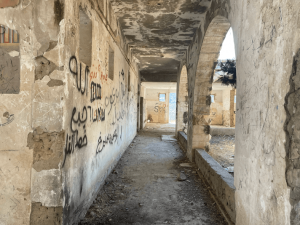 When the Jordanian Arab Army inherited the site in 1948, they added a little mosque (only 10 x 10 meters) with a small minaret (8 meters high) to the east of the compound. A big hole near the head of the minaret is probably the result of a shell during the war. 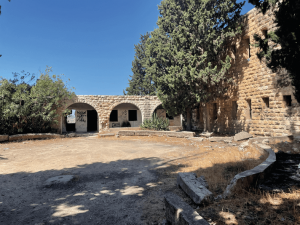 Settlers confiscated the place in 1977, and just outside the main northern entrance, they built a synagogue that they buried when they were evacuated in 2005.

According to local historians, the name Tursallah is derived from turs allah, which means the shield of God. It is believed that Saladin gave it that name when he set up camp there on his way to defeat the Crusaders in 1187 AD. 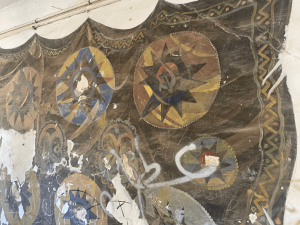 Seventeen years have passed since Israel evacuated its settlers, and the site is still in ruins, slowly getting weaker and weaker. Soon nature will take its toll. Such a place is ideal to be rehabilitated and used as a community center, just as many castles of the Ottoman tax collectors or the Arab administrative governors of the eighteenth century have been converted. History repeats itself; all these sites that were once places of violence, power, and fear are now quiet, old, sad, and empty. 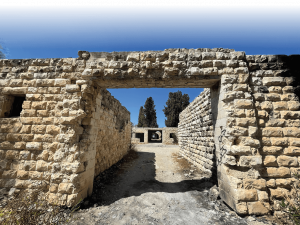