To cement the partnership with the private sector, UNDP/PAPP, in partnership with the Ministry of Tourism and Antiquities (MoTA) and other local partners, is working on cultural heritage revitalization and cultural tourism development to contribute in supporting local economic development and socioeconomic recovery, particularly in the aftermath of COVID-19. The following is a vision for three historical sites in Palestine that are in need of repair so they can join the ranks of Palestinian tourist attractions. The following sites are examples from an extensive list, whereas the UNDP and its development partners are actively searching for unfunded sites that require rehabilitation and have the potential to revitalize the cultural tourism movement in Palestine. 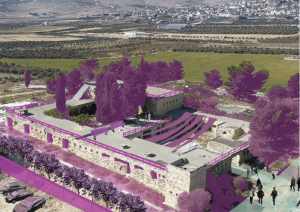 Tursallah fortress is located in Jenin Governorate near the town of Jaba’. It is an iconic monument surrounded by 15 dunums of agricultural land strategically located on the road between Nablus and Jenin. According to some historical resources, the site was initially constructed during the Mamluk era and was expanded during the Ottoman period. It was then used by the British and the Jordanian military as a military camp. The site remained under the control of the Israeli Authorities until 2005, irrespective of the Israeli evacuation in 2005, and restoration and development of the site are highly restricted by the Israeli Civil Administration. Currently, the site is abandoned and constantly vandalized by Israeli settlers. It requires urgent repairs, restoration, and infrastructure upgrades. The location possesses great potential and could be transformed into a tourist complex and rural ecotourism destination. In addition, it could serve as a business and fair-trade center. It could also contain an exhibition center, training center, and boutique hotel. 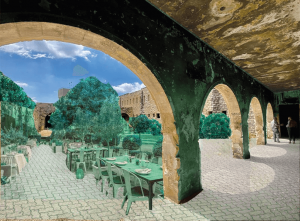 Deir Qidees is another magnificent historical site which is located in Ramallah Governorate in Deir Qidees in Area B. Situated in an attractive rural location in the midst of nature, it once served as a government office. Sadly, it is neglected and requires urgent restoration and infrastructure upgrades. The building could be used as a lodging facility offering tourism-related services to support ecotourism and alternative tourism activities.

Al-Jiftlik site is located in Jericho and Al-Aghwar Governorate, specifically in Al-Jiftlik village in Area C. The building is situated in a rural area with a view of the Jordan Valley. It served as a government residence before the Israeli authorities utilized it as a prison. Currently, the site is deserted and is facing structural failures. Major parts of the site, including the original floors, have been destroyed due to illegal activities for antiquities searches. Al-Jiftlik site requires immediate action for restoration and protection as well as infrastructure upgrades to unleash its socioeconomic potential with a concentrated focus on development dividends for the local community. It could be used as a country inn while also providing services for alternative tourism. 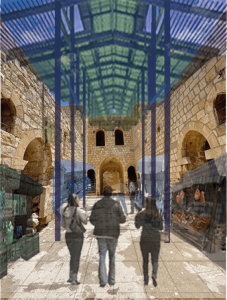 It is important to note the need for in-depth historical research and documentation for all targeted sites, including those mentioned above, in order to ensure the integrity of preservation design and to safeguard the authenticity of the sites throughout the development trajectory and planned operation and management.