To the Good People of Gaza 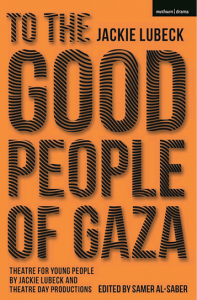 On July 15 this year, I will be 70 years old. On September 20, I will have been living in Jerusalem for 50 years. These are things to celebrate, along with the publication of my first book, To the Good People of Gaza, a collection of youth theater plays. Although not many of us read theater plays for entertainment, this collection of 19 texts could be of interest because it covers daily life in the Gaza Strip as I know it from working there – and in all of Palestine – for so many years of my life.

Luckily, Bloomsbury Publishing will release the book just as Theatre Day Productions (TDP) begins to archive its 27 years of theater making, as it had embarked on engagement in Gaza in 1996. My husband Jan Willems, serving as artistic director, and I began to work on developing Palestinian youth theater in 1994, when the maps of Palestine were being redrawn in the name of a hopeful peace that did not come. But freedom was to be found in lots of local initiatives where creativity was the driving force.

Making theater for youth allowed us certain freedoms because youth theater was not yet “worthy” of much attention. Children were not yet seen as partners in creative dialogue or as the source of societies’ best secrets. In working with and for youth, we were given the great opportunity to hear and tell all kinds of stories about all strata of Gaza society.

The plays in the collection were written between 2010 and 2018 as part of our Gaza summer programs, and all of them were shown hundreds of times before thousands of kids and teachers and school counselors. The plays were written in sets, not all of them presented here due to space limitations and my personal preference. Among the texts, you will find two plays from the set To the Good People of Gaza, where we hear about kids being thrown away, kids who can’t read, kids dying from incurable illnesses, and kids writing poems. In the set Entanglement, you meet grandfathers, mothers, sisters, and unrelated characters who share their own views of the world from the perspective of old men, worried women, and ignored little girls. In the set titled A Human Writes, I go to the world of kings, weavers, cooks, and electricians, all of whom must deal with an old-fashioned Wazir and his young and hip – but just – king. Lost and Found was written during the 2012 bombardment and is a set of six plays where we say goodbye to trees, brothers, shops, schools, and bedrooms and in their place find friends, family, work, and a reason to live. Finally, there is Thirteen Ways of Looking at Gaza, where I have tried to write when all is calm. Here the kids are bored, have a thousand questions, want to travel, want to learn, and are afraid.

All the plays, presented here in English, were originally performed in Arabic over the Gaza summers. They are short, each running between 30 and 45 minutes when performed. I have written the foreword and Jan Willems has written an afterword. There is an introduction by Samer Al-Saber, one of a few people who has followed my work from the early days of El-Hakawati Theatre Company to the lasting days of Theatre Day Productions.