Inaash is an NGO founded in 1969 by Huguette Khoury Caland, a daughter of the first Lebanese president, along with a group of Lebanese and Palestinian women. They foresaw the need to preserve the rich heritage of Palestinian embroidery while generating financial support for Palestinian refugee women in camps across Lebanon (Aïn el-Helwé, Miyyé Miyyé, Al Jalil, Mar Elias, Rachidieh, and Bourj El Chamali).

“When I saw the state of things, I wanted to break up the ghetto and give these women independence and work, as well as the opportunity to revive their craftsmanship,” explained Huguette Khoury Caland. Since Inaash’s inception, over 2,000 Palestinian women have benefited from their work with the association, both in monetary terms and through a sense of community and cultural continuity. Today, around 350 women are active in six camps. Their work with Inaash not only provides them with a way to earn a decent living, it also enables the women to preserve their traditional skill while transferring this valuable cultural heritage from mother to daughter, thus maintaining a sense of continuity and belonging to their homeland.

Together, Inaash and its embroiderers have established a reputation for unique artisanal collectibles, featuring designs drawn from Inaash’s significant archive of samples dating back over a century. These high-end, exquisitely embroidered products include abayas, shawls, jackets, clutch bags, cushions, and fashion and accessory items. 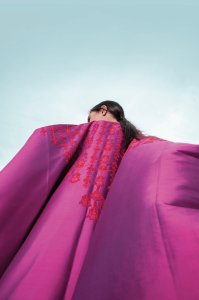 Inaash’s in-house designers work alongside local and international artists and designers to adapt traditional motifs and patterns to twenty-first-century aesthetics in the form of signature shawls embroidered on handwoven najaf wool or silk fabric, najaf abayas and jackets, contemporary clutch bags, tableware, and a large range of cushions. These products are exhibited and resold locally, regionally, and internationally in Jordan and Egypt, throughout the Gulf (Abu Dhabi, Bahrain, Dubai, Kuwait, and Saudi Arabia), in Europe (including London, Paris, and Hamburg), and in the United States. 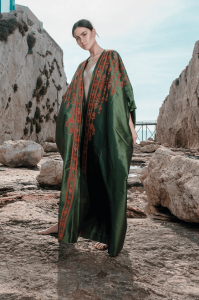 Internationally known Lebanese designers who have worked with Inaash include Nada Debs, Rabih Keyrouz, and Mira Hayek. Interior designer May Daouk has long cooperated with Inaash to produce outstanding new cushion designs, embroidered by Inaash, including for a highly successful exhibition and sale of cushions at the John Rosselli Gallery in New York.


In addition, Omar Joseph Nasser-Khoury, a Palestinian embroidery expert and fashion designer from Jerusalem/Birzeit has worked intermittently with Inaash since 2009. His work focuses on historical textiles and dressmaking techniques from Palestine. A graduate of the London College of Fashion, Omar’s first design for Inaash was a crinkled (shambar-style) silk shawl. Omar Joseph says that his first encounter with an Inaash embroidered najaf shawl in 2005 was one of the main reasons he decided to study fashion and pursue a career researching embroidery and textiles from Palestine. A jacket embroidered by Inaash from his first collection was acquired by the British Museum in London in 2011; it is one of the first fashion items the museum acquired.

The Twelve Windows installation, a collaboration between Inaash and the internationally recognized Palestinian artist Mona Hatoum, comprises twelve exquisitely embroidered panels conceived as a museum installation. Researched and designed by veteran Inaash co-founder Malak Al Husseini Abdelrahim, each panel represents through its motifs and patterns a key region of Palestine, and together they form a visual map of Palestine through the medium of its long-standing tradition of embroidery. In Hatoum’s hands the panels are transformed into a brilliant metaphor for Palestinian life under occupation. The installation  has been exhibited in prestigious venues, including Kunstmuseum, St. Gallen, Switzerland; the Alexander and Bronin Gallery, New York City, USA; the 2015 Arts of the Islamic World Gala at the Museum of Fine Arts, Houston, USA; and in major Hatoum Restrospectives at Le Centre Pompidou, Paris, France, and Tate Modern, London, UK.

Through this high-profile project and the outstanding quality of its 50-plus-year output, Inaash has remained true to its original mission of empowering Palestinian women refugees and safeguarding their cultural heritage. Together, Inaash and its artisans continue to inform the world of a skill and tradition that goes back centuries but is still vibrant, potent, and relevant today.

Kindly check the Inaash website www.inaash.org for further information, and visit Instagram at inaashassociation to learn more about Inaash products.

Jamileh and Nazmieh Salim are two of six sisters who embroider for Inaash. Their story is emblematic of thousands of Palestinians displaced by Israel in 1948, and later in 1967. It also encapsulates the lives of hundreds of women who have embroidered for Inaash during the last almost 50 years.

Born in Fureidis, a village near Haifa in Palestine, their parents fled their home in face of Israeli aggression in 1948. They headed first to the town of Nabatiyyeh in South Lebanon, believing that they would return home soon. Later they moved to the poetically named Tel ez-Zaater (Hill of Thyme), then the largest Palestinian refugee camp in Beirut. Ten children were born before disaster struck. The camp was razed in 1976, during the Lebanese Civil War, when a bitter massacre wiped out thousands of Palestinian lives.

The Salim family fled once more, this time to Mar Elias, a camp on the other side of Beirut where they still live. To this day they have no idea what happened to their father who disappeared during the fighting. “Our mother raised us,” says Jamileh. “It was not easy to provide for ten children. She cooked for an aid organization and cleaned a school close to the camp. As kids we used to help her. She used to tell us about our home village of Fureidis (from the Arabic, meaning Garden of Eden). To me it seemed like paradise and I longed to go there.”

“When I first opened my eyes (as a baby), our nanny was wearing a thobe. When we went to Jericho, we would see women at the water springs, all wearing beautiful dresses. It never occurred to us to learn how to do it or copy their designs. Now our country is gone… but we have embroidery, and this nobody can take from us. When you embroider a piece, it is yours. It’s more than just embroidery, it’s about national belonging.” A quote by Inaash co-founder Malak Al Husseini Abdelrahim from the documentary Stitching Palestine, directed and produced by Carol Mansour, in which Malak recollects how embroidery has always been part of her life, even though she realized its importance only after the Nakba.

Jamileh started to embroider when she was 13 years old. It became a lifetime commitment. “I can say that by now embroidery flows in my blood, I could never stop doing it.” Nazmieh too has clocked up almost 30 years of embroidery and between the two of them the sisters have produced some of Inaash’s most outstanding work.

“In Palestine,” Jamileh explains, “the women would gather together to embroider, usually in front of their houses. They would put a basket in the middle with the balls of thread and start to work – a word here and a word there, a stitch here and a stitch there, that’s how it’s been for centuries.

“We six sisters embroider, plus my sister-in-law and my nieces. Along with the neighbors, we sit together and chat as we embroider and we survive. During the summer we sit outside and in winter we are inside one of the houses, each person takes a corner or a seat and we embroider. While we work we talk about all sorts of things.”

“I am fast,” Jamileh continues. “I work eight or nine hours a day depending on my circumstances, how much time I have with the housework, the cleaning, the cooking, helping my children with their schoolwork. I get up very early, wash, pray, and start my day. But I really like to embroider at night, after I put the children to bed, till 11pm or midnight; on school holidays I can keep going till one or two o’clock in the morning.”

Nazmieh prefers to work alone. “I like solitude, I prefer to sit on my own and let my thoughts drift. I think of my children, my situation, my health and well-being. I reflect on all sorts of things, how to sort this and that out, how to get by. The thoughts drift and wander.”

Both sisters worked on the iconic Inaash project entitled Twelve Windows, the museum installation created by internationally acclaimed artist Mona Hatoum from a twelve-panel project designed by one of the Inaash co-founders Malak Al Husseini Abdelrahim. Each 90 x 90cm square panel represents in its motifs, patterns, and colors a different region of Palestine. Together they form a visual map of the country through the medium of traditional embroidery.

“Two pieces are close to my heart,” explains Jamileh. “The Beit Dajan piece took me two and a half months to complete. I don’t know why but when I was working on it, I felt I was in the heart of Palestine; and the Jerusalem piece that I finished in five and a half months. How can I put this? – the Jerusalem piece gave me so much incentive to continue working in order to ensure that our embroidery will never die out, or disappear.”

The Palestinian Thobe: Our Embroidered History