In December 2018, the Yemeni rivals signed the Stockholm Peace Agreement as the first step to de-escalate and move forward towards peace in Yemen. But who is the man behind the peace agreement between the Yemeni peoples? The principal broker and the engineer of the agreement that still holds today despite many setbacks? It is Marwan Kafarna from northern Gaza who works with the UN Special Envoy to Yemen.*1 Many have jokingly asked how the Palestinians could be instrumental in uniting the Yemeni people and leading them to sign a peace agreement when they are not able to do that at home. When Palestinians are given an opportunity to work under a legitimate umbrella, they not only excel, they also aim for perfection in their work, whether in ending conflicts or engaging in humanitarian work to change people’s lives for the better.

Despite their low numbers compared to other nations, Palestinian immigrants have worked tirelessly to integrate into their host communities, gain an education, shine in science, or rush to help other nations and engage in humanitarian work. It has become commonplace to meet senior officials or professionals of Palestinian origin in international agencies, such as the Swedish International Development Cooperation Agency, the Canadian International Development Agency, the Qatar Foundation, the German Corporation for International Cooperation, or even in refugee agencies.

According to the Palestinian Central Bureau of Statistics, the Palestinians in the European diaspora number around 300,000, as do those in North America. In South America, however, there are approximately 800,000.*2

A few years ago in Beirut, as I was consulting the European Union’s Regional Trust Fund in Response to the Syrian Crisis, I discovered that a few Palestinians from occupied Palestine served there as heads of regional programs or worked as program officers at senior levels. At the same time, I also found out that many academics at the American University of Beirut are Palestinians who received their education in the West and went back to teach and contribute to the development of Arab societies. In 2017, I was in Iraq as part of a humanitarian mission, when I realized that many Palestinians had joined local UN agencies such as UNHCR, WHO, and OCHA at both senior and junior levels. Their pride in being Palestinians and their commitment to their work strengthened my belief that Palestinians – even though they suffer from refugee status, the occupation, corruption, and inequalities – are committed to being part of global efforts to achieve sustainable development, fight poverty, and assist others. Palestinians understand very well what it means to live as refugees, exiled, in poverty, under oppression, a corrupt administration, in conflict, and in unequal societies. Their work is motivated by their deep understanding of such issues and their commitment to change. In that sense, they work as agents of change in a self-motivated manner. 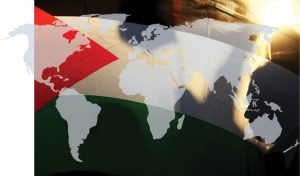 Before the 1948 Nakba and the mass uprooting, the number of Palestinians who left for Latin America was enormous, and a few went to Europe to receive an education. The Nakba, however, altered the way Palestinians looked at themselves and other peoples (viewing them through the lens of colonized and colonizers). Palestinians started to settle in Europe and North America, where they integrated well into their host societies, becoming part of the political, economic, and societal forces. The first generation of Palestinians after the Nakba focused on educating themselves or their children because they realized that education is the only tool available to them to create a decent life and find a place to live after having been kicked out of their homes in Palestine. Pierre De Bané, for instance, who emigrated from Haifa, became the first Palestinian in the Canadian cabinet in the seventies and contributed as minister of state for external relations, minister of fisheries and oceans, and minister of regional economic expansion.*3

When it comes to engagement in scientific work or to efforts to achieve the SDGs, especially in terms of fighting chronic diseases such as cancer, a good example of efforts to achieve health and well-being is professor Hashem El-Serag, whose research and findings have contributed immensely to the efforts of eradicating hepatitis and kidney disease.*4

When it comes to reducing inequalities in the developed world, working for peace and justice, Dr. Laila Al-Marayati comes to mind. She was born to a Palestinian father from Gaza and is the first Arab presidential appointee to the US Commission on International Religious Freedom. She is also a former president of the Muslim Women’s League and has set an example in fighting racism, inequality, and injustice in American society.*5 In South America, one of the most famous human rights defenders is José Zalaquett, whose work during the military and authoritarian regime in Chile was remarkable and will always be remembered.*6 The above names are just examples of how Palestinians have contributed to their host communities and how their integration into their host societies is reflected in their commitments to achieve prosperity in other societies as well.

In recent years, and particularly since the civil war in Syria and the siege on the Gaza Strip, many persons of Palestinian origin immigrated to Europe in search of a better life. Dozens of them wasted no time and engaged with humanitarian agencies rather than heading back to refugee camps after they settled their legal residencies. They volunteered as teachers and health workers and mobilized donors as well. Even though the UN quota scheme of employment associates how much a donor country provides in financial aid with how many senior and operational staff from that country are hired, the Palestinians have found their way to engage through volunteering or through working in INGOs that focus on achieving the SDGs.

It is no secret that Palestine lacks the financial capacity to be a significant donor. Because of the occupation, Palestine was forced to become a recipient country. However, Palestinians have proven to be vital donors of human capacities that contribute not only at the operational but also at the senior level, where otherwise it would be impossible to achieve and sustain certain milestones, mainly when it comes to peace- and conflict-related SDGs.