Black goats are sunbathing by the pool at the Zalatimo upper house,* which overlooks the village of Ein Qinya down in the valley. 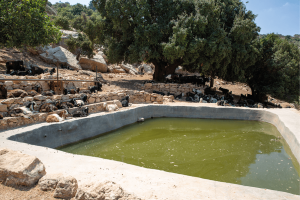 The road that leads to the Zalatimo houses is a piece of natural art, with high evergreen citrus trees, both lemon and orange, on either side. A few meters higher, you’ll notice the mouthwatering ripe and rosy fruits that dangle from pomegranate trees at this time of year. Walk a little bit farther up the trail and you will reach the great sycamore tree by Ein Um ar-Rumman (the Mother of Pomegranate Spring), with its one-of-a-kind figs hanging from its trunk, a phenomenon unique to sycamore trees.

As you continue uphill among more wild bushes and trees, you will find an extensive variety of wild plants and trees mostly native to this land, such as prickly burnet, strawberry trees, hawthorn, oak, ziziphus,  carob, and rubus. Around the Zalatimo houses, you will find huge pine trees, almonds, pears, cypresses, walnuts, and the beautiful Tree of Heaven (which has an amusing name in Arabic: Zanzalakht). 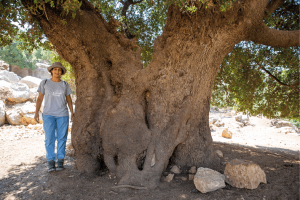 These two lonely old houses that still stand on the cliff of a hill to the south of Ein Qinya belong to the Zalatimos, a Jerusalemite family. In 1937, Ibrahim Zalatimo, along with his two sons, Mohammed and Daoud, bought the houses in this charming place to be used as summer homes. The houses were built by the Dosouqi family, also from Jerusalem. The upper house was built in 1916, and the lower house in 1932, by a mason from the neighboring village of Ein Arik named Nakfouri Awwad. 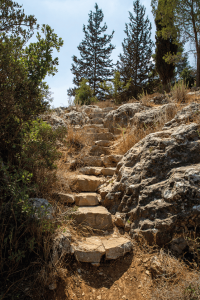 Fayza Zalatimo, 73, the daughter of Daoud, who lives in Wadi al-Joz in Jerusalem, 25 kilometers south of Ein Qinya, recalls with nostalgia the numerous summers that she and her many cousins used to spend in those houses. She learned to swim in the pool at the upper house and remembers the lovely summer nights she spent listening to stories told by her elderly grandmothers, the playground under the ginormous oak tree, the picnics, and the hunting that her father enjoyed. The houses fell silent following the 1967 Israeli occupation of the rest of Palestine and were later looted and vandalized.

During that summer of 1967, the houses stood empty and deserted for the first time. They stayed that way until 2016 when an idea was born in the heart of Sahar Qawasmi, an architect who passionately loves her land and environment. She and her partner, Nida Sinnokrot, established Sakiya – Art Science Agriculture, which, according to Sahar, is “a progressive platform and a field for the production and sharing of knowledge through grafting together local agricultural traditions of self-sufficiency with contemporary art and environmental practices.” Sakiya seeks to create a new narrative about the relationship with the land, the locals, and cultural production. This viable project integrates agriculture within the framework of a residency program, where artists, farmers, handicraft initiatives, and small industries play a prominent role alongside local and visiting artists and researchers. 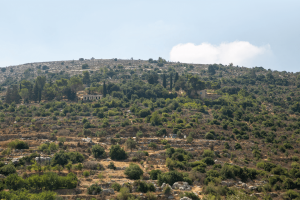 Sakiya is open to visitors every day. Currently, the two houses are undergoing an intensive restoration process and will soon be fully functional. In the meantime, you can still visit and enjoy the scenery. You can even camp in the open space above the upper house. For more information and visits, call Sahar at 059 952 4000, or visit the Sakiya Facebook page: @sakiyaorg.