The Storyteller of Jerusalem

Translated from Arabic by Nada Elzeer

WINNER OF THE 2014 PALESTINE BOOK AWARDS 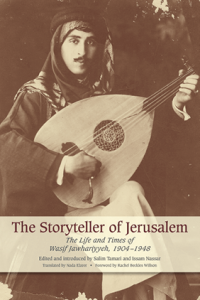 The memoirs of Wasif Jawhariyyeh are a remarkable treasure trove of writings on the life, culture, music, and history of Jerusalem. Spanning over four decades, from 1904 to 1948, they cover a period of enormous and turbulent change in Jerusalem’s history, lived and recalled from the daily vantage point of the street storyteller. Oud player, music lover, ethnographer, poet, collector, partygoer, satirist, civil servant, local historian, devoted son, husband, father, and person of faith, Wasif viewed the life of his city through multiple roles and lenses. The result is a vibrant, unpredictable, sprawling collection of anecdotes, observations, and yearnings as varied as the city itself.

Reflecting the times of Ottoman rule, the British Mandate, and the run-up to the founding of the state of Israel, The Storyteller of Jerusalem offers intimate glimpses of people and events, and of forces promoting confined, divisive ethnic and sectarian identities. Yet, through his passionate immersion in the life of the city, Wasif reveals the communitarian ethos that runs so powerfully through Jerusalem’s past – and offers perhaps the best hope for its future.

Booklist called it “An extraordinary memoir … Highly recommended.” In its review, the Electronic Intifada said: “It is no overstatement to say that the appearance of The Storyteller of Jerusalem is a very significant event, revealing new facets of Palestinian life before the Nakba – the ethnic cleansing that led to Israel’s establishment – and challenging many preconceptions and stereotypes … a rare glimpse into ‘middle-class’ life in Jerusalem at the end of the Ottoman period … Jawhariyyeh’s depictions of late Ottoman and Mandate Jerusalem give us eyewitness accounts of the diverse society destroyed by the establishment of the State of Israel … For those with background knowledge of Palestine under Ottoman and Mandate rule, it will be a source of fresh perspectives and details. For those new to the period, the book provides a highly readable, intimate account of life for urban Palestinians. And for all readers, its portrayal of a diverse, vibrant society is a bitter-sweet glimpse into what Palestine might have been, in a world without European and Zionist colonialism.”