Then my life journey took me to Italy, even the mere glimpse of an Israeli flag flying over a food stall in the city of Varese would provoke me. “This is our food!” I told my colleague. “Israelis can sell mujaddara, hummus, maqlubeh and falafel, but they cannot declare them their property!” As if stealing the land, water, and air were not enough?! This food is part of our identity and culture. For me as a Palestinian, each plate has a story that relates to my people, the state, and the fragrances of my homeland.

Israel uses food to claim ownership of the territory and encourage tourism, not only internally but also abroad, featuring it in advertisements and in articles published in international newspapers and world-famous magazines. Israeli chefs present huge events in which they appropriate Palestinian cuisine and our cultural foods, denying the origins of these foods and pretending that they are theirs. As Israelis proclaim ownership of plates whose origins lie in the Middle East, the Levant, or even Egypt, they deny the existence of the people who live on this land and whose dishes and recipes are much older than the state of Israel. 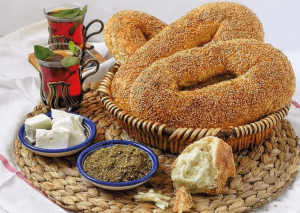 Someone as tenacious as I cannot let this go by unchallenged. Instead, I have decided to use food as a soft power tool to fight the occupation. Food has become my means to speak about Palestine.

Historically, cuisine has been a mirror of civilization, culture, heritage, and the economic status of a people. Likewise, Palestinian dishes reflect all these aspects and elements. Take musakhan, for example, a Palestinian farmer’s dish that traditionally has been cooked during the olive harvest season: tabun bread is drenched in olive oil, covered with onions that have been caramelized in olive oil, and topped with sumac. All these ingredients are the fruit of Palestinian land. As living standards rose, chicken was added, then toasted almonds and pine nuts were sprinkled on top. But despite these changes, the dish has kept its original flavors as its essence has been passed down from generation to generation, preserving the authenticity of the dish.

Our occupiers can take possession of our food in the material sense, as they have done and continue to do with our land. But they cannot transmit its history, traditions, and associated sentiments because we Palestinians consider our food to be a thread that brings us together and connects us to our homeland – especially those of us who live in the diaspora.

It is no coincidence that many Palestinian poets and writers talk about food when they express their longing for their homeland. The famous Palestinian poet Mahmoud Darwish, for example, wrote while in exile, “Dearly I yearn for my mother’s bread, my mother’s coffee.”

Food is part of Palestinian identity wherever we go. It reflects our culture, heritage, and personality.