The Patronato Quarter is located on the north bank of the Mapocho River, which flows through the city of Santiago in an east-to-west direction. Formerly inhabited by the indigenous peoples of Chile, the area used to be called La Chimba, a term borrowed from the Quechua chinpa. During colonial times, this area was where the Spaniards lived – somewhat distant from the then small city of Santiago, which was the historic center.

The subsequent commercial development of the area began in the late nineteenth century with the arrival of Arab immigrants – mainly Palestinians, Syrians, and Lebanese, but also Jordanians – who typically engaged in commercial activities as their main economic pursuit, offering a wide range of imported goods at a time when the domestic production capacity in Chile was limited. Later, during the 1920s, Arab immigrants established in this area many of the first Chilean textile factories. Several factory owners chose to live on the upper floors of their commercial premises in order to save money during their first years in this far-away land. This practice, however, made some members of the Chilean elite suspicious because the Arabic language sounded alien to them since they used to look to European culture as the desired ideal, certainly influenced by the Orientalist trends of the time.

It is also in this area that the Arab communities in Chile founded many of their institutions, such as the San Jorge Orthodox Cathedral in 1917, and the Syrian Polyclinic in 1927.

Nowadays, the Patronato Quarter is also home to businesses run by Korean, Chinese, and Taiwanese immigrants, and has become one of the commercial sales areas best known to Santiago’s residents. Here you can find a variety of textile and technology shops, as well as cafés and restaurants – familiar places that bring to memory traditional flavors through preparations such as mahshi (stuffed vegetables), shawarma, ceregli (filo pastry), or coffee with cardamom. 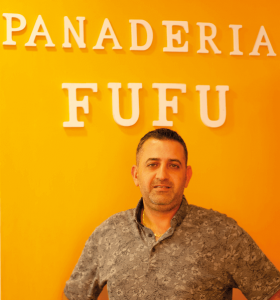 In the late 1980s, Elias Abujeries opened a bakery and pastry shop in the city of Beit Jala, Palestine. In 2012, he arrived in Chile and opened a branch of the shop in Santiago, which is currently under the charge of his sons, Johnny and George. In the beginning, it was a small establishment that only made bread, specifically pita bread, with no fat, chemicals, or preservatives. As time passed, Fufu Bakery gradually grew and increased their product selection by adding new offerings, such as Arab pastries. 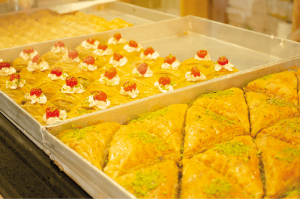 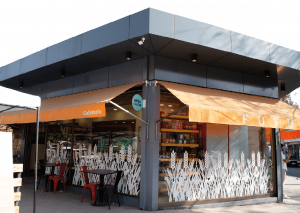 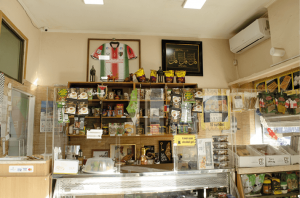 Amin and Fardos Melhem arrived in Chile fourteen years ago. These cousins are husband and wife, and their story is marked by fleeing. Their respective families fled Palestine after the founding of the State of Israel in 1948 and settled in Iraq. The United States’ invasion of Iraq led them to flee again, this time to the refugee camp of Al-Tanaf, on the border between Iraq and Syria, along with other Palestinians. There, in a tent, with no basic services, and under the harsh desert conditions, they lived and struggled for two years before immigrating to Chile. 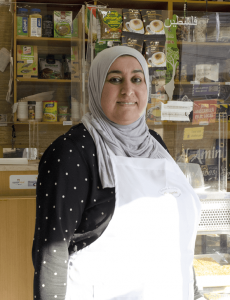 Fardos narrates that they first arrived at a building on Santos Dumont Street. “But a Palestinian-Chilean, Nieves Abuhadba, helped us with the lease of a house, and we were able to set up our business,” he adds. Their establishment, called Al-Amin, is a pastry shop selling Arab sweets in the heart of Patronato. It not only serves the neighbors and nearby restaurants, but also customers from the eastern part of the capital. 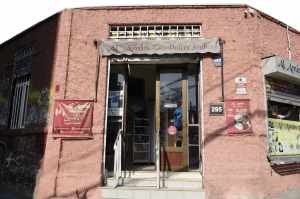 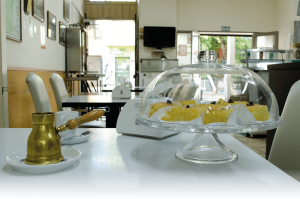 This café is named after the city of origin of most Palestinian descendants in Chile, which are estimated at five-hundred thousand. It serves Arab sweets, shawarma, and, once a week, stuffed dishes, such as vine leaves or zucchini. Alternatively, you can choose either kebab or baked kibbeh with rice. 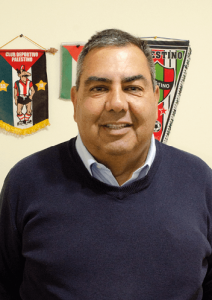 The café is one of the favorites of the diaspora children, who visit the premises daily to chat about their main topic of interest: the results of the soccer matches played by the Palestino Sports Club. After every weekend, they enjoy lively discussions about the performance of the coach and the players, in a pleasant and friendly atmosphere. 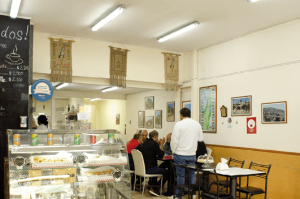 This popular hangout is decorated with photos of its namesake city and significant sites, such as the Church of Saint Nicholas, Al-Majrur (a neighborhood in Beit Jala), and various family houses.