By Mazin B. Qumsiyeh
and Issa M. Albaradeiya

Many nations realize that we must create both international and local instruments (including conventions and laws) to address the significant decline in the state of our environment. The Palestinian environment suffers from some of the same challenges faced by environments in other countries, but our situation has been exacerbated by ongoing colonization. Finding ways to manage this task requires significant thought, planning, and creativity in environmental conservation. This article provides a brief examination of the challenges and opportunities that face the Palestinian Environment Quality Authority, academia, CSOs/NGOs, and individuals.

The Palestinian environment is straining under many challenges that include the loss of natural resources, the excessive use of pesticides/insecticides, climate change, and desertification, which have already led to habitat loss and destruction, documented in many articles in peer-reviewed journals.*1 But even more damaging have been the numerous occupation policies, including the building of walls, bypass roads, and industrial settlements that pollute the Palestinian environment with solid and liquid waste; the ongoing depletion of natural resources; urbanization caused by socioeconomic restructuring and the massive migration of Jews from other countries to Palestine; the bantustanization/ghettoization of the native Palestinian people; and last but not least, the policies and practices that prevent us from managing our environment or protected areas. The resulting habitat loss and decline in biodiversity not only destroys the economic and social benefits from ecosystems but also impacts human health and well-being.

All stakeholders, including the Environment Quality Authority, academia, civil-society and nongovernmental organizations, and individuals must face the existing challenges head-on and bring their efforts together to create meaningful change – and avoid irreversible damage.

This damage is no different from previous colonial impacts on our native environments. Destructive projects before 1967 include the destruction of native species and native mixed species as well as forestation that used only the European pine tree (Pinus halepensis) rather than native species, the draining of the wetlands in the Hula area and the diversion of water from the headwaters of the Jordan Valley (Lake Tiberias), which dried up the Jordan Valley, destroyed eastern habitats, and altered western habitats in Palestine. The Israeli occupation added further challenges to the Palestinian environment with its system of control that prevents us natives from exercising our sovereignty, including in the areas of managing the environment and natural resources and solving pressing environmental issues. The Palestinian National Authority, established in 1994, was expected by many to gradually acquire state authorities, leading to independence after the interim transition period of five years. Yet under these Oslo/Washington agreements, we were given only limited self-government, which prevented us from really gaining authority over such aspects as natural resources. Numerous studies – including those done by the Palestinian Central Bureau of Statistics, the United Nations (e.g., OCHA, UNEP), and even the World Bank – show that we have significantly problematic trends in areas relevant to the environment (such as population health, population growth, water resources, greenhouse gas emissions, a decline in green spaces, etc.). 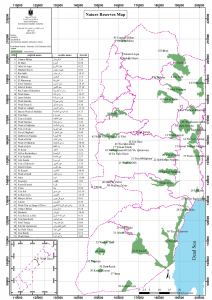 Even under occupation, Palestine has been ahead of other countries in realizing the importance of the environment. In the 1960s, the early work of Sana Atallah, the first Palestinian zoologist, sprouted systems of education that initially were supported privately and then developed into a number of school-based projects, NGOs, and academic projects. The opportunity for better organization came in the 1990s with the establishment of the Palestinian Authority and its Ministry of the Environment (which morphed into the Environment Quality Authority). Despite the restrictions – as it declared statehood in 1988 from abroad, achieved some semblance of authority on the ground in 1994, and gained the status of nonmember observer state at the United Nations in 2012 – Palestine has proceeded to maneuver as best as it could to get leverage on environmental issues. As a state, Palestine has signed 21 treaties and protocols of international conventions related to the environment, including the Convention on Biological Diversity (CBD), the Paris Agreement under the UN Framework Convention on Climate Change, the Basel Convention on the Control of Transboundary Movements of Hazardous Wastes and their Disposal, and more. These carry with them certain privileges and benefits but also many obligations, some of which are difficult to implement in light of the Israeli occupation.

The Palestinian environment has numerous weaknesses and faces many threats.

The Environment Quality Authority (EQA) is the umbrella for all activities and studies related to environmental planning, protection, and control. The EQA’s core mission is to protect the environment with all its elements and prevent environmental hazards from threatening any living organism. This work falls under Environment Law No. 7 of the year 1999 and its amendments, which gave the EQA the responsibility for leading the coordination of work related to the environment. Such engagement, however, is not solely the responsibility of the EQA but shared by all other Palestinian ministries, academia, and other governmental and nongovernmental organizations and institutions concerned with the Palestinian environment, based on the principle of partnership and complementary work.

The State of Palestine has signed 21 treaties and protocols of international conventions regarding the environment, indicating that it seeks to embrace its strengths and opportunities even under occupation.

For the past two decades, significant capacity building has been implemented locally in areas related to biodiversity, including the establishment of several new environmental NGOs and at least two academic biodiversity centers (at Al-Najah and Bethlehem Universities), and increasing funds have been spent on environmental projects between 2005 and 2020. These efforts have not only contributed to expanding classical environmental education and awareness but have also led to a mushrooming of research regarding local fauna and flora, published in peer-reviewed journals, and to better conservation on the ground. For example, management plans for Wadi al-Quff were drawn up, and our team (EQA with Palestine Institute for Biodiversity and Sustainability – PIBS) published six research papers related to Wadi al-Quff in a special issue of the Jordan Journal of Natural History.*2


But we look now to an even brighter future. EQA strategies have called for the localizing of work, coming up with better action plans, and even the drafting of better environmental laws that are in line with international standards and laws. Let us cite just three examples.

First, PIBS is working on the sixth and final national report in line with Aichi Biodiversity Targets.*3 While the work contract was assigned to PIBS for facilitation, this is a collective effort and indicates that between 2015 and 2020, significant progress has been made by the State of Palestine in environmental research, education and awareness-raising, and conservation, in line with its own national strategies and Aichi targets.

Second, starting in July 2021, we will embark on a project to design the new National Biodiversity Strategies and Action Plans (NBSAP) in a manner that reflects the country’s vision for biodiversity as well as the broad policy and institutional measures that the country will take to fulfil the objectives of the CBD, comprising concrete actions to achieve the strategy. The only NBSAP for Palestine was issued in 1999. It is essential that all sectors whose activities affect biodiversity as well as the societal groups that depend on biodiversity be brought into the NBSAP process. This will engender a broad ownership of the NBSAP, whereby all stakeholders in biodiversity are engaged in its development and implementation. It also enables “mainstreaming,” which means the integration of biodiversity considerations into relevant legislation, plans, programs, and policy, such as national development plans, national strategies for sustainable development, poverty-reduction strategy papers, strategies to achieve the Millennium Development Goals, national programs to combat desertification, national climate change adaptation or mitigation strategies, and relevant private-sector policies.

Furthermore, the EQA contracted a local team to develop a national strategy to mitigate and manage the threat of invasive alien species (IAS) in Palestine, including legislation to prevent the introduction of new IAS and the spread of the already present IAS. This includes carrying out a risk analysis, making use of information and communication technology to carry out risk communication, and providing an infrastructure to gather data and combat these species that destroy our native fauna and flora.

The Palestinian environment suffers from many environmental stresses, including colonial activities and certain socioeconomic trends. These challenges are difficult to deal with without sovereignty. Yet, we have significant opportunities to exercise our rights and reclaim our sovereignty in ways that ensure sustainability for nature and for our people.

For the first time, such national projects engage local experts in leadership positions in close partnership with the EQA. The preliminary study carried out between 2015 and 2020 showed major achievements in environmental conservation, environmental education and awareness-raising, signing and implementing obligations under international treaties, and developing and implementing local conservation strategies and action plans. The action plans being formulated are ambitious for environmental conservation. They cannot be done in isolation. Through funding and technical support from Belgium, for example, we were able to protect a unique rainwater catchment area near Wadi Qana that hosts an endangered ecosystem, including aquatic plants, toads, and crustaceans found nowhere else in the West Bank. Through the European Union we have a project, led by PIBS, where we partnered with the Palestinian Center for Rapprochement between People and the Galilee Society to create a biodiversity center, a human diversity center, and an education center. In partnership with the Royal Society and the Natural History Museum in London, we also built the first molecular labs dealing with environmental DNA. All these and many other projects are participatory, and we urge everyone to get involved. Despite the challenges and obstacles we face, including those created by Israeli colonial activities, we are confident in our abilities to face and shape our future. Respecting ourselves, respecting others, and respecting nature.


*1 See, for example, research conducted by the Palestine Institute for Biodiversity and Sustainability and Palestine Museum of Natural History, available at palestinenature.org/research.

*3 In the tenth meeting of the Conference of the Parties, held from October 18 to 29, 2010, in Nagoya, Aichi Prefecture, Japan, a revised and updated Strategic Plan for Biodiversity, including the Aichi Biodiversity Targets were adopted for the 2011–2020 period (https://www.cbd.int/sp/).