The Palestine sunbird was declared the national bird of Palestine in 2015 after the Israeli occupation authorities tried to change its name in their efforts to erase Palestinian identity.


Sunbirds are among the smallest birds in the country, ranging from 8 to 12 cm in length. They are brightly colored, with curved beaks and tubular tongues. The males’ distinctive bold, metallic blue-green colors on their heads, backs, chests, and bellies serve to attract mates, while the females and juveniles appear grey-brown, allowing them to blend into their surroundings. During the breeding season, from June to October, bright yellow and orange tufts under the males’ wings appear as a scorching flame.


The Palestine sunbird’s downward-curving beak and long tongue whose tip resembles a brush are adapted to obtain nectar from flowers. While sunbirds feed mostly on nectar, invertebrates such as insects and spiders are an important part of their diet as well. By catching herbivorous insects and arthropods that can harm crops, sunbirds thus can help reduce the use of pesticides and aid in maintaining a healthy ecosystem. Sunbirds also serve as pollinators. 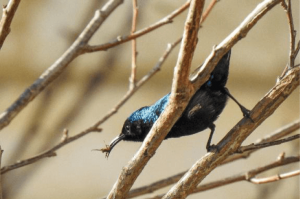 Most sunbirds feed largely on nectar but can also eat insects and spiders, especially when feeding their young.


Many people mistake sunbirds for hummingbirds. But while some features are similar, a phenomenon known as convergent evolution, these birds are not closely related. The resemblance lies in the fact that both birds are small, often colorful and very active, and feed mainly on nectar. However, a major difference is that sunbirds feed while perching, which means that they rest on a branch or a flower to acquire food, whereas hummingbirds usually feed while hovering. Moreover, sunbirds are songbirds, whereas hummingbirds are in the same order of classification as swifts. Sunbirds are found in Africa and Asia, while hummingbirds are restricted to the Americas. In Palestine, the sunbird is a very common resident bird that can be found in both city and village.


The Palestine sunbird not only carries the country’s name but also symbolizes Palestinian natural heritage. Wildlife societies in Palestine and independent researchers have done a great job in raising awareness of the existence of this marvelous bird by creating or participating in competitions that aim to document and honor the Palestine sunbird. Although birding, writing, or painting can be seen as simple means of expression, they are, in fact, very powerful in confronting any force that tries to erase our existence. Palestinian poet Tamim Al-Barghouti tied resistance to beauty, saying, “Whenever you face injustice or roughness, remember to defend yourself by finding beauty … document, prove, and defend it because all beauty is resistance.”

Rana Hijawi is a biology graduate who is passionate about science and research. You can visit her
Instagram page
@wildlife.with.rana.