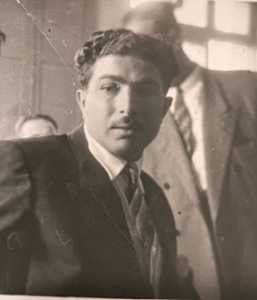 I am a Palestinian-American, Orthodox Christian who was born in Jerusalem in 1925 in the Upper Baqa’a neighborhood. Between 1940 and 1948, I was a member of Jerusalem’s Orthodox Sports Club that was directed at the time by Mr. Salameh. In 1941, I started to play on the soccer team as a left wing. We played many games in Palestine, Jordan, Syria, and Lebanon. Among the games that I remember very well were two we played in Amman, Jordan, in 1946. Jordan had two soccer teams, one was named Faisaly and the other Al-Alhali. Our trip started with four taxis to accommodate the team of 15 people. We arrived in Amman by noon after a two-hour trip and stayed at the Philadelphia Hotel that was owned by the Nazzal Family and located next to the famous Roman amphitheater. The players on my team included George Rizzek and Assad Haddad as fullbacks, Mike Handal as goalkeeper, and Michel Diedis as center forward. Other players were Lolas, as left halfback, Tarazi, who was a forward, and George Dabbah. Our Orthodox Club of Jerusalem faced the two Jordanian teams on the old soccer field at the Maahatta. When we won both games, the local fans were very upset and threw tomatoes at our players. Later in the evening, we were invited by the Kawar and Asfour families in Amman to eat mansaf. 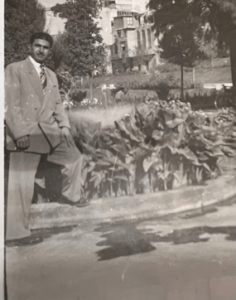 Displaced from Jerusalem during the Nakba, Edmond Aboujudom lived in Jordan where he served as the general manager of Phillips until 1988. After retiring, he moved to the United States.