The story of the Mariam Foundation is an account of pain that changed the face of fighting cancer. Today, the foundation is the leading Arab nonprofit organization in Palestine to help support patients and fight cancer. Offering both financial and emotional support, it aims to be a home for all Palestinian cancer patients. The Mariam Foundation was born through the pain of losing a sister, Mariam, whose pain and suffering proved the inspiration to change the fight against cancer. 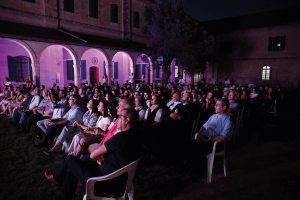 On September 10, 2004, an eight-year-old angel called Mariam Hamed from Palestine passed away at the Mayo Clinic in Minnesota, ending a three-year-long battle against cancer fought mainly in Rambam Hospital in Haifa. The Hamed family went through many hardships, such as dealing with a non-native language and a distorted image of cancer patients, considered as doomed to die and more dead than alive among the local community. Through their journey, the family had witnessed other families face misery and deal with contradictions and paradoxes: death and life, tears of joy and sorrow, and the tragic fact that treatment is neither affordable nor available for numerous families in the West Bank, the Gaza Strip, and, at times, the 1948 areas.


Because pain can generate hope and resilience, and I had always been by Mariam’s side, I decided that something had to be changed so no other cancer patient would have to go through what my family had suffered. Because I was only 15 years old when Mariam rested to find eternal peace, I volunteered to support cancer patients and wrote a booklet about my sister’s journey, promising myself I would establish Mariam Foundation when I reached the age of 22 years, when I could legally establish a nonprofit organization. I wanted to help other patients on their journey and hoped to improve community perceptions of cancer as an illness of fate and doom, aiming to remove the frequently associated feelings of pity or shame.

After seven years of extensive planning, Mariam Foundation was officially established in 2012. Rendering its services to people regardless of their ethnicity or background, the foundation offers 360-degree care and has become patients’ second home and their main address for support. The foundation provides financial and emotional support, helps with the payment for medical treatment for those who fall out of medical insurance or have none, arranges daily companions for pediatric patients in hospitals, and does much more.


Over the years, Mariam Foundation has partnered with hospitals and health care service centers around the country, among them Augusta Victoria Hospital in Jerusalem, An-Najah University Hospital in Nablus, and Rambam Health Care Campus in Haifa. The foundation has gained the trust of the local communities whose members continuously partake in its events and activities and follow its news. At the same time, Mariam Foundation raises awareness of the importance of early detection through its participation in medical conferences, festivals, lectures, hospitals, clubs, schools, and other events, also targeting communities that lack basic services. Tailored projects are designed to meet patients’ needs and make them feel at home and not fear cancer. The foundation tries to entrench the notion of victory, which is a fundamental part of the treatment.

One Palestinian woman out of eight is diagnosed with breast cancer.

When more funds had to be raised to care for increasing numbers of patients, Mariam Foundation decided to advocate its cause on an international level and to embark on educating the world about the situation in Palestine – convinced that every Palestinian deserves to receive the care and medical treatment that is available in developed countries. The vision to establish a nonprofit organization in the United States to support Mariam Foundation’s work and initiatives guided the creation of Friends of Mariam Inc. While Mariam Hamed died in the United States, today her memory rises anew, emerging from the same country. Friends of Mariam Inc. is run by a committee with extensive experience in managing nonprofits and aims to raise awareness of projects in Palestine and Israel among people who live in the United States.


Imagine this scene unfold: A seven-year-old child from Gaza is diagnosed with cancer. This in itself sounds bad, but it is only the start. The child is sent to Haifa for chemotherapy but must travel alone because the parents cannot exit the Strip due to Israeli-imposed access restrictions. Thus, the child’s first nights are spent in a hospital with a complete stranger: the only person who was able to become his escort. Imagine the mother’s feelings as she bids her child farewell on his way to the unknown, and imagine his feelings that first night in the hospital faced with unfamiliar faces, a foreign language, an uncertain fate. Does this sound like the prologue to a Netflix show? Sadly, it is not. And if it were, it would be based on the true story of ailing Palestinian children who travel from Gaza to Israeli hospitals for treatment. Fifteen to twenty years ago, this exact scene unfolded with Mariam and Mohammad.


Among the main projects of Mariam Foundation has been the organization of daily companionship for such children through the Mariam Joy project. It connects sick children who must exit Gaza alone with escorts and makes sure that someone is always present to support them, play with them, and ease the pain caused by long stays away from home during their cancer treatment. Such was the story of Musaab, a seven-year-old boy from Gaza who arrived at Rambam Campus with a complete stranger. Musaab had to stay at the hospital for an extended period to undergo chemotherapy sessions and could not see his parents. Mariam Joy volunteers became Musaab’s friends. He started to ask about the times when they would visit and, having completed his treatment, stayed in touch with the foundation and its volunteers – with whom he has become friends for life.

How can you explain cancer to a five-year-old girl? Or tell her that her mother has cancer and might lose her hair? As Mariam Foundation was frequently faced with such situations, another innovative idea was born: the Mariam Library project. Mariam Library offers children stories that address them in a language they understand and deliver their message through simple yet impactful words.


Mariam Foundation projects are woven together by their mission to create awareness. An example is the story of Mary Eilabouni, a mother of four whose oldest son has frequently played the oud at breast cancer awareness festivals. His associated exposure to the message that early detection is crucial eventually came to fruition. Urged on by her son, Mary took the test. The bad news was that she was diagnosed with cancer, but the good news was that it was at a relatively early stage. Thus, Mary’s life was saved. A few months later, Mary attended a foundation event and told how Wardi, her youngest daughter, had used to hold her hair while falling asleep and how it had been very hard to break the news that her mom would soon lose her hair. The story of how Mary involved her daughter in cutting and braiding it, so Wardi could have it for keeps formed the basis for the story “My Mother’s Braid.”

Conditions are very harsh in Gaza, especially for cancer patients. The May 2021 war on Gaza added fuel to the pre-existing fire because patients found themselves discharged from hospitals to clear the way for the injured. Having nowhere to go and no address where they could receive medication, cancer patients became one of the most vulnerable groups in Gaza. Therefore, in cooperation with its partners at Augusta Victoria Hospital, the foundation initiated an extensive relief campaign to supply medication through the Aid and Hope Program for Cancer Patients’ Care, a Palestinian nongovernmental organization established in Gaza in 2010. Eventually, this partnership grossed over US$160,000 in medical aid that was allocated to purchase medicine for the Aid and Hope Program and other needy hospitals.

While cancer is among the most difficult diagnoses for any person, whether an adult or a child, Mariam Foundation and its programs do their best to alleviate the suffering and provide a glimmer of hope for those afflicted.