By Zeina B. Ghandour 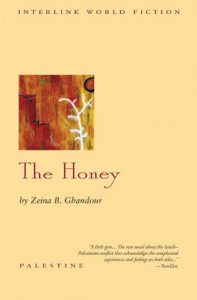 Ruhiya, the muezzin’s daughter who lives in an oasis village in Palestine under Israeli occupation, is an intensely spiritual young girl. When her father lies ill on his deathbed and Yehya, her childhood love and a recently converted fundamentalist, sets off on that same night on a suicide mission, Ruhiya breaks one of Islam’s highest taboos and recites the call to morning prayer herself. At the last moment, her song magically reaches Yehya in faraway Jerusalem, and instead of detonating the explosives that have been strapped to his body, he retreats and runs. The next day, Maya, a foreign journalist, is sent to the village to cover these two stories. Faced with a wall of silence, she seeks answers with the encouragement of Asrar, the only witness to Ruhiya’s transgression, the little girl who hears and sees everything yet is the keeper of all secrets. The honey in this novel is a ubiquitous magical substance that heals everything. It runs through the land like its lifeblood.

Through the themes of suicide and liberation, the story of a woman, a village, and a people is told.

“Elliptical and lyrical, this is less a novel than a glimpse into the minds of the five narrators: Ruhiya herself; Yehya, her childhood love and would-be terrorist; his father, Farhan; Maya, a foreign journalist; and Asrar, the little girl who was the only eyewitness to Ruhiya’s deed.” Publishers Weekly

“The rare novel about the Israeli-Palestinian conflict that acknowledges the complicated experiences and feelings on both sides without making an overt political statement, it is the story of a woman’s need to assert herself in nontraditional ways… a little gem.” Booklist

“…the story is so tightly packed that every word resonates and multiple readings are required…a glinting little novel that emanates big ideas about politics, pleasure, language, religion and fulfillment, be it earthy or otherwise.” The National 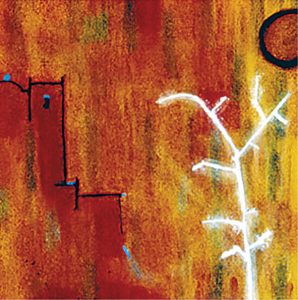 Zeina B. Ghandour was born in Beirut, Lebanon, in 1966. She studied law at Kent University in the United Kingdom, specializing in Jewish and Islamic law. The Honey is her first novel.