While this edition of This Week in Palestine on healthy living was being prepared, the 26th United Nations Climate Change Conference, also known as COP26, is taking place in Glasgow, Scotland.*1  This conference is a global gathering where world leaders meet to address global warming and climate change and their impact on the planet, the atmosphere, and humanity’s well-being. Enabling the reduction of greenhouse gas emissions (GHG),ii the financing to go green, and assistance for developing countries that face the consequences of climate change were the main targets of the conference.  The task at hand is to limit the rise of earth’s temperatures to 2 °C – or better 1.5 °C if possible – as agreed upon in the Paris Agreement signed at COP21 in 2015. 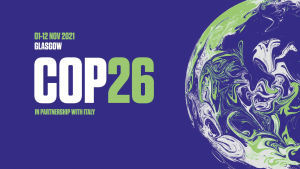 Global warming and climate change are linked. The summer of 2021 set record temperatures as the hottest summer the world has faced in a century and a half. Extreme weather conditions are increasingly leading to natural disasters and causing thousands of deaths and injuries, and material losses in the billions of dollars. We witnessed fires, melting ice, drought and desertification, floods, rising sea levels, water and food crises, migration, increased political conflict, and instability. The disastrous events of the summer of 2021 loudly ring the bell that action is needed. The Glasgow meeting attempted to respond to the threats that all of us are facing. Our mother earth is at the mercy of the consequences of our actions, and we are making it boil!

Six years ago, at Paris COP21, every country agreed to work together to limit global warming to well below 2 degrees, aiming at 1.5 degrees. As of today, the world has failed to meet the challenge, as less than 1 percent of the GHG-related goals will be achieved by 2030 unless we change our approach, and developed countries stand by their Paris Protocol commitments to reduce GHG emissions and commit to their financial pledges to tackle climate change.

This is a nightmarish scenario for our generation and catastrophic for our children and grandchildren, as future generations will be presented with a burning earth. Since the start of the Industrial Revolution (around 1750), human activities have increased the atmospheric concentration of carbon dioxide by almost 50 percent, from 280 ppm in 1750 to 419 ppm in 2021. The last time the atmospheric concentration of carbon dioxide was this high was over 3 million years ago! In his statement on the eve of the climate change summit and COP 26, UN Secretary-General António Guterres noted that data and extreme weather conditions show that governments are not even close to the level of ambition required to limit global warming. If we are serious about keeping it to only 1.5 degrees, then GHG emissions must be reduced to 46 percent of the current level by 2030!

In the Paris Agreement, countries committed themselves to bringing forward national plans to reduce their emissions, known as nationally determined contributions (NDCs). But the world is currently not on track to limit global warming by 1.5 degrees. If we fail to initiate change, temperatures will continue to rise, bringing even more catastrophic flooding, bush fires, extreme weather, and destruction of species. The targets announced in Paris would result by 2100 in warming well above 3 degrees compared to pre-industrial levels.

As part of the Paris Agreement, every country agreed to communicate or update the targets of their emissions reduction every five years. Glasgow will call on all countries to update their NDCs, so they are in line with limiting earth’s average temperature rise to 1.5 degrees. It is crucial that developed countries – the largest emitters – take the lead.  At COP26, the objective is to work together to enable and encourage countries affected by climate change to protect and restore ecosystems and build defenses, warning systems, and a resilient infrastructure to avoid the loss of homes, livelihoods, and even lives. Prior to Glasgow, countries were asked to come forward with ambitious emission reduction targets for 2030 that align with reaching net zero by the middle of the century. To deliver on these targets, countries must accelerate the phase-out of coal, curtail deforestation, speed up the switch to electric vehicles, encourage investment into renewable energy sources, and phase out fossil fuel.

A report citing the total GHG emissions for which China is responsible (produced by 1.4 billion people, this amounts to an average of 7 tons per person annually) indicates that the country exceeds the emissions of all developed countries combined and is the largest coal user in the world. A report prepared by the Rhodium Research Group states, “China is responsible for causing 27 percent of the greenhouse gas emissions that led to global warming in 2019.” The United States comes in second in total emissions (notably, however, at a per capita emission of 15 tons per year), causing 11 percent of global emissions. India ranked third with 6.6 percent. Scientists warn that without an agreement between the United States and China, it will be difficult to avoid a dangerous climate change scenario. China has committed to reducing GHG emissions by 64 percent by 2030, whereas the United States aims at a reduction of 50 to 52 percent by the same year.

Climate change in particular impacts water, the essence and prerequisite for life and for the future of humanity, deepening water shortages locally, regionally, globally. Currently, around 1.1 billion people worldwide lack access to water, and a total of 2.7 billion find water scarce for at least one month of the year. Furthermore, inadequate sanitation is a problem for 2.4 billion people who are exposed to diseases and water-borne illnesses due to a lack of hygiene. Two million people, mostly children, die each year from diarrheal diseases alone. Around 450 million children live in areas of high or extremely high-water vulnerability, which means that they do not have enough water to meet their everyday needs.  Contaminated water poses a huge threat to children’s lives. Water and sanitation-related diseases are one of the leading causes of death in children under five. Every day, over 700 children under five die from diarrhea linked to inadequate water supply, poor sanitation, and a lack of hygiene.

The world must halve GHG emissions over the next decade and reach net-zero carbon emissions by the middle of the century to reach targets.

Climate change is responsible for rainfall reduction and rainfall pattern changes; rivers, lakes, and groundwater aquifers are drying up or becoming too polluted to use. More than half of the world’s wetlands have disappeared. Agriculture not only consumes much more water than other sectors but also wastes much of that through inefficient use. As climate change is altering weather and water patterns worldwide, water shortages and droughts are occurring in some areas and floods in others. By 2025, two-thirds of the world’s population may face water and food shortages, and the ecosystems around the world will suffer even more. The Middle East and North Africa (MENA) region and the Arab World are reported to be the most water-scarce regions in the world. The MENA region comprises 17 of the most water-stressed countries globally, where nearly 66 million people lack basic sanitation, and only scanty proportions of wastewater are adequately treated. In the MENA region, the water per capita in 17 out of 22 countries amounts to much less than the absolute water scarcity figure (500 cubic meters per person). In other countries of the region, it is less than the standard water scarcity, estimated at 1,000 cubic meters per person. The consequences of climate change will worsen the water and food situation; lead to further insecurity, turmoil, and migration; and impact hundreds of millions living in the MENA region.


Particularly affected is the Middle East, a conflict zone that already suffers from political instability and unrest, drought, desertification, and water stress. Globally, agriculture accounts for an average of 70 percent of water use, while in the MENA region, the sector consumes more than 80 percent of the total water use. Additional factors that contribute to the local water scarcity include conflict, especially in Syria, Yemen, Gaza and the West Bank, Iraq, and Sudan. Exacerbated by population growth, these conflicts are aggravating the ongoing urbanization, poor water management, and deterioration of water infrastructure.

Because developing countries need support in dealing with the effects of climate change, developed countries must deliver on their promise to raise at least US$ 100 billion every year in climate-related financing to support developing countries. More importantly, these funds have to be provided as grants and not loans!*2

In Palestine and the Middle East, a green fund must be established to enable adaptation, address mitigation, and enhance resilience. This could be achieved under the Green Middle East initiative announced by Saudi Arabia. “Healthy living in the occupied territories” is questionable! As Palestinians live under occupation and lack control of their resources, they are vulnerable and exposed to the threats and consequences of climate change, mainly water and food insecurity. The occupation hinders Palestinians’ ability to adapt and mitigate, as it restricts Palestinian access to land and resources. In Palestine, the per capita emissions are less than 1 ton annually, and its international contribution is close to zero. Israel occupies and controls the land, resources, and natural wealth while its per capita emission is 8 tons annually and its international contribution amounts to 0.3 percent.

The Gaza Strip, one of the most densely populated areas in the world, faces a complex situation, as it is exposed to the consequences of climate change and particularly hard hit by the inhumane measures of the occupation. More than two million people are besieged and do not have access to clean water or to less harmful energy sources, such as the gas that is available for extraction in the Gaza marina. Gaza was and remains exposed to multiple floods, more contamination, the pollution of its aquifer and  sea, a limited supply of energy, and limited space for the implementation of clean energy sources.

The occupation and the expanding settlements in the West Bank make Palestinian efforts to achieve resilience and mitigate climate change even harder. Palestine’s plans to achieve the sustainable development goals are impeded and thwarted while settlers – aided and protected by the Israeli military – are uprooting trees, and settlements are growing in size and number, increasingly linked with Israeli cities and communities as well as Jerusalem through continuously expanding networks of roads, tunnels, and bridges.

One of climate change’s consequences in Palestine is the reduced production of olive oil, which constitutes half of the agricultural crop. More than 100,000 families depend on this crop, but its production has been reduced by half due to climate change and the ongoing decline in rain as well as the reduced availability of and access to land.

Palestine and Israel are not immune from the consequences of climate change, yet as Palestine must also endure the occupation, it will suffer even more.

The Glasgow summit must decisively highlight the responsibility of developed countries for climate change and towards their brothers and sisters in developing countries. Developed countries must not only commit to zero carbon and to the reduction of GHG emission, they must also compensate those most affected for the damages they have caused. The key factors to judge the success of the Glasgow conference lie in how much developed countries are willing to commit to reducing GHG emissions and to financing mitigation mechanisms – and how much they are willing to follow up on their commitments. As for our region, it must go green. Israel must enable Palestine to access its land and resources to become energy efficient and climate change resilient. For our region’s future and the outlook of coming generations, we must address the threats of climate change by working together – locally, regionally, and globally!

*2 The OECD estimates that US$78.9 billion of climate-related financial support was mobilized in 2018 – 75 percent of it as loans!