As I walked up the stairs to the second or third floor of the Borghese Museum, I was fascinated by the music I could hear playing, and thought, “Wow, Italians have a special touch for the details.” During a soiree event hosted by the Italian Ministry of Foreign Affairs (MOFA) organized at the famous Borghese Gallery and Museum in Rome, including a private visit of the art galleries, I was surprised to find myself in front of musicians. Yes, the music I had enjoyed while walking up the stairs was live. I scanned the portraits hung around the walls and covering the ceilings. The paintings were mostly works by the famous artists Bernini and Raffaello. Nevertheless, I was unable to focus properly on the artworks, as my auditory senses overpowered my visual senses. The tones overrode the artist’s feather. I felt I had to approach the musicians who played to every ear!

On the left played a charming, brave young lady dressed in a long black soiree gown. I could not resist asking in Arabic whether she was Palestinian! If mistaken, I told myself, she would not understand my Arabic and could just ignore my inquiry. My urge was not merely caused by curiosity, her beauty and confidence were too Palestinian to my eyes. The young lady continued to play while answering softly, “Yes, I am Tibah Saad from the Galilee, and these are my brothers; we are The Galilee Quartet!” The surprise had a chilling effect on me, as my foreign colleagues in the conference began flocking in to enjoy the artworks while listening to a high-level performance by the young Palestinian ensemble.


With great pride, I present to you the Palestinian musical ensemble The Galilee Quartet. It is made up of three brothers and one sister: Mostafa, Ghandi, Omar, and Tibah Saad. Founded in 2011, the quartet formed to participate in the Palestine National Music Competition in 2012 and received first prize. They continued to rehearse until 2013, at which time they scattered to different countries in pursuit of their musical studies. But they regularly reunited during academic and summer holidays and recently have performed numerous concerts in the Middle East and Europe. They have performed also as members of the Palestine Youth Orchestra and the Mediterranean Youth Orchestra and recently became associates of the Ensemble Music Academy of Palestine at Dar Al Kalima College in Bethlehem. The quartet is known for its diverse music, as all members play both Western classical and Arabic traditional music. 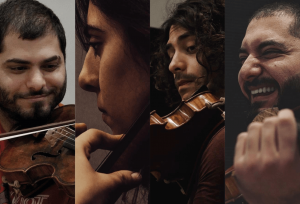 Female quartet member Tibah is studying music at the Stauffer Academy Cremona, an international music academy founded in 1985, one of Italy’s most prestigious music institutions and an international reference point for string players. The academy selects young musicians of exceptional talent from all over the world, offering the opportunity to an exclusive path of artistic growth entirely free of charge! Thanks to the partnership enjoyed by the Stauffer Academy and the Italian MOFA, I was given the opportunity to get acquainted with The Galilee Quartet that I proudly classify as a Palestinian National Brand.


This experience came on the sidelines of my participation as a speaker in the Mediterranean Dialogues: Rome Med 2022, a conference that provides a high-level global political space. Public diplomacy communicates with the masses in countries worldwide, aiming to influence and persuade, which directly reflects on foreign policy. Public diplomacy is concerned with bringing peoples closer together by finding common grounds. Music diplomacy is one of the most important branches of public diplomacy, as music is a medium that affects people even if they do not speak the same language, a communication tool that needs no teacher.