A natural phenomenon that is unique in the world, the Dead Sea lies in an area that was part of the original homeland of the first humans, a cemetery for the major monotheistic religions,*1 a place where ancient civilizations emerged and flourished, a crossing point for trade routes, and an area that attracted military invasions throughout successive historical eras. The historical and touristic importance of the Dead Sea Basin region is due to the sea itself and its shores, where important archaeological and religious monuments are located, such as Masada, Khirbet Qumran, and the Cave of the Prophet Lot. Moreover, it features natural salt formations and a prevailing desert climate with year-round sunny skies and dry air, all of which make the Dead Sea an attraction for international tourism, especially medical tourism. It is noteworthy that thousands of hotel rooms are concentrated mainly in northeastern part of Jordan and in the country’s western part that overlooks the southern basin of the Dead Sea. The area has been nominated as one of the Seven Natural Wonders of the World. 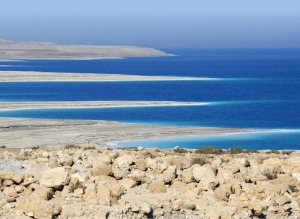 Many factors have contributed to this decline, including the ongoing climate change, witnessed by the world in general and the region in particular, which has led to a state of drought and scarcity of rain. This situation has affected particularly the formative springs of the Dead Sea as well as the rates of evaporation along its tributaries over the last sixty years. But the most important reason for the decline lies in Israeli water projects, implemented to exploit the water of the Dead Sea tributaries to serve Israeli expansion and settlement, especially in the Negev region. Most important among these projects is the National Water Carrier, implemented by the Israeli government in 1964, which diverts the waters of the Jordan River, transporting around 400 million cubic meters (MCM) of water per year. Historically, the amount of water flowing annually from the Jordan River to the Dead Sea is estimated to have reached around 1.4 billion cubic meters. But this amount has decreased dramatically during recent decades to around 30 MCM today. Israel has also constructed many dams on the main sources of some Jordan River tributaries, including the Yarmouk River, the main feeder of the Jordan River, and some dams on valleys that block rainwater from reaching the Jordan River.

The surface area of the Dead Sea has decreased significantly over the past seven decades.

On the other hand, Jordanian and Israeli industries that extract potash and the various beneficial salts from the Dead Sea consume huge amounts of water from the Dead Sea, estimated at about 200 MCM annually.


The most important problems that have resulted from the decline of the Dead Sea level include the following: The level of groundwater in the surrounding areas has decreased and its quality has deteriorated. Around 4,000 sinkholes have formed along the western coast of the Dead Sea that have caused much damage, such as the collapse of streets and even of hotels and resorts. There has been an increase in the Dead Sea’s salinity and in the crystallization and deposition of salts. This affects the springs located along the Dead Sea shore, such as Ein al-Fashkha, and disturbs the area’s biodiversity. It has also had a negative impact on tourism and on the aesthetic view.

World Bank sources estimate that if the Palestinians were allowed to exploit their natural resources of Dead Sea minerals alone, they would earn an annual income of US$918 million, of which US$624 million would come from the extraction of potassium and US$276 million from the extraction of
bromine.*3

Israeli activities in the Dead Sea region have led to the deterioration of plant and animal species, as Israel has established many industrial and tourism projects on the shores of the Dead Sea, fragmentating and maiming this sensitive ecosystem, which has led to the elimination of several species, especially migratory birds. The use of the area as a military training zone has damaged both wildlife and vegetation.


The Dead Sea is of great economic importance because it contains quantities of high-value salts and minerals. Israel extracts and sells potassium, magnesium, and sodium chloride salts, among others, in amounts that in the year 2009 were estimated at 4.1 million tons, generating US$3 billion of annual income from the proceeds.

On the eastern and western sides of the Dead Sea, there are a number of nature reserves that house a wide variety of organisms. The most important protected areas located on the western side of the Dead Sea are Al-Fashkha and Ein Gedi.

Al-Fashkha Nature Reserve is located on the northwestern coast of the Dead Sea and covers an area of ​​about five square kilometers. It forms wetlands that include many fresh- and saltwater springs and is one of the most important and beautiful natural areas of the region. This reserve is considered to be an important home for many plants and animals. Among the most popular plants that grow in the reserve are oleander, reeds, and palm trees, and among the most famous animals that live there are wild goats, mountain gazelles, Nubian ibex, rock hyrax, hedgehogs, porcupines, and desert chukars.

The reserve is also a home and sanctuary for many resident and migratory birds, most famous among them are the Dead Sea sparrow, lesser kestrel, and black eagle. The night heron is considered one of the migratory birds that have begun to reside and breed in the reserve; it is found in the western part of Ein al-Fashkha and on the mountains overlooking the Dead Sea. Finally, there is the white stork that passes over the reserve in very large numbers during the migration season.

The reserve furthermore contains many springs that are considered among the most important and largest springs along the Dead Sea, called Al-Fashkha springs group.

Approximately 21 springs are located along the northwestern coast of the Dead Sea, where the water flows eastwards towards the Dead Sea with an annual flow rate that ranges from 90–106 MCM of relatively saline water.

The Al-Fashkha springs group contains more than ten springs, which are the most important and largest springs along the western coast of the Dead Sea. Al-Fashkha Spring, considered the most significant in that group, is located at an altitude of approximately 390 meters below sea level on the northwestern shore of the Dead Sea, at the bottom of the limestone-rock mountains of the Jordan Valley. The water from the spring flows in seeps that resemble blood that flows from a head wound, an image that is captured by the word al-fashkha. The average annual discharge of this spring is about 60–70 MCM.

The Tarraba springs group consists of outbreaks that are concentrated in a small area located several kilometers south of the Al-Fashkha group. The springs of this group flow in the form of veins and thus are similar to the spring of Al-Fashkha in terms of its flow mechanism. The average annual discharge for this group is about 16–18 MCM.

Al-Ghuwair Spring is located several kilometers south of the Al-Fashkha group at an altitude of about 390 meters below sea level with an average annual discharge of about 11 to 14 MCM.

Tannour Spring is located less than one kilometer south of the Al-Ghazal group at an altitude of about 380 meters below sea level and has an average annual discharge of about 0.5 to 3.7 MCM.

Sinkholes are defined as circular depressions that occur in the ground, especially in areas composed of karst rocks. Their diameter usually ranges from several meters to several hundreds of meters, while their depth is between several centimeters to hundreds of meters. They can develop slowly and imperceptibly or may collapse instantly and catastrophically. More than 4,000 sinkholes have formed since the 1980s within a 60-kilometer-long and 1-kilometer-wide strip along the Dead Sea’s western coast due to landslides in the subsurface voids that are caused by the flow of water through soluble rocks (carbonate, salt, anhydrite). While the decline in the level of the Dead Sea greatly contributed to the formation of these sinkholes, their formation in the region is related to the hydrogeological situation. Three main elements contribute to this process: the salt layer, the aquifers with different salinity and hydraulic conductivity, and the connection between these layers and the salt layer.

Approximately 4,000 sinkholes have formed in the Dead Sea area due to low seawater levels that allow for the intrusion of fresh groundwater that dissolves deep-lying salt layers.

The prevailing hypothesis regarding the hydrogeological reasons for the sinkhole formation suggests that the decrease in the Dead Sea water level is accompanied by a decrease in groundwater levels due to the hydraulic connection between the Dead Sea and the aquifer on the Dead Sea’s western shore, as the low Dead Sea water level allows for the penetration of low-salinity groundwater into the coastal area. As a result of this incursion, the up-to-20-meter-thick salt layers that are located in the beach area at a depth of 25–50 meters below the earth’s surface are being dissolved, causing the collapse of the overlying layers.

ii “The Red Sea-Dead Sea Water Conveyer: The Project, the Assessments and Potential Benefits to the Palestinian Territory,” Palestine Economic Policy Research Institute MAS, March 2013, available at https://www.mas.ps/files/server/20141911184926-1.pdf; note: there is a mistake in the English translation that cites the reduction as 1 cubic meter, whereas the Arabic original says 1 meter in height.