When I was consulted recently as to what topics This Week in Palestine should cover in this upcoming issue, I was at a total loss. With a specialization in environmental health and toxicology and years of experience in the field, I was overwhelmed by the sheer range of topics that can – or should – be covered. Nobody can fully recognize or grasp the full extent of the challenges to which we are currently exposed that make healthy living a quite impossible task. Impossible because contaminants may sneak up on us through our diet or via our environment, and we are no longer able to control our exposure to pollutants, that range from chemicals to radiation, stress, and so on. In this article, I will touch on some pollutants and environmental hazards and on the environment in general.


Let me begin with agrochemicals. There is a great deal of controversy surrounding pesticides and their toxicity. Extensive discussions revolve around how they affect the environment and biodiversity and how much they contribute to unhealthy living. Pesticides are used to fight a variety of organisms that affect agricultural products (and those used in public health). They repel or kill insects, fungi, viruses, and what we consider undesirable plants. There is a good reason why pesticides have a bad reputation, as some of these chemicals negatively impact our health in both the short and long terms. Pesticides also contribute to higher rates of mortality and morbidity. Newer pesticides are effective at a lower concentration than earlier generations and claim to be less toxic to humans. Unfortunately, this may not necessarily be true because, with time, their toxicities may manifest in ways that manufacturers did not predict – or knew but kept silent about – including rare types of cancer and delayed neurotoxicity.

Can we live without pesticides? The answer is yes and no. Humanity farmed without these chemicals for thousands of years, but the introduction of mono-crops created considerable problems with pest invasions. The subsequent introduction of massive uses of pesticides has disrupted the environmental balance, as beneficial pests that had previously controlled harmful pests were largely eliminated. Attempts to minimize the use of pesticides in programs such as integrated pest management and organic agriculture have been successful, yet only on a limited basis, and need additional government support. In modern agriculture, it is next to impossible to eliminate pesticides, but the introduction of pest-resistant produce species aids in reducing the dependence on these chemicals.

Pesticides can find their way into our diet, where they have harmful effects. Regulation to control their use is of utmost importance, especially in developing countries – that sometimes serve as experimental stations for newly developed agrochemicals. More information is available through the World Health Organization (WHO) that classifies pesticides according to their toxicity, based on scientific research, and regularly reviews and adjusts this classification according to new evidence.

The smoking of tobacco is a major contributor to serious health problems. Tobacco should be classified on par with other narcotics. It is obvious that smoking leads to dependence and addiction, as nicotine attaches itself to receptors in the brain with a seemingly calming effect. But its metabolization, combined with increasing receptor desensitization, triggers smokers to light more cigarettes to restock these receptors, with nicotine thus acting much in the same way as narcotics do. Although governments incur high health care costs due to tobacco use, the income generated from taxes placed on tobacco is also high, which makes governments hesitant to take serious action and limit its use. While the percentage of smokers in the West has decreased, smoking in the Arab Middle East is still high, with people starting at an earlier age.

More disturbing is the increasing consumption of nargileh or water pipes (hookah), particularly with muassel or flavored tobacco. Inhaling the fumes generated by burning such tobacco – and the charcoal – is harmful. I do not have statistics on the percentage of females versus males who smoke them, but casual observation indicates a high percentage of female smokers.

A new trend in smoking is the use of e-cigarettes, where nicotine is vaporized, forming harmful chemicals and toxins. This habit is merely a way of fooling oneself regarding one’s nicotine addiction.


Food additives have become part of most processed foods. These can be colors, preservatives, emulsifiers, and texture modifiers among hundreds of similar substances. Most of these additives are regulated by government agencies to minimize health effects, and most manufacturers comply, especially in areas where strict monitoring is enforced. However, this is not necessarily the case in developing countries. Alarmingly, some imported foods cannot be sold in their country of origin, mainly due to stricter regulations in these countries regarding certain additives!

Do food additives affect healthy living? To some extent they do, especially if their use is not regulated. The newer trend in more developed countries is to minimize their concentration and reduce the number of allowed types.

Most consumers face the problem that they are unable to understand ingredients and the impact that additives have on their health. I am not aware of campaigns to educate consumers on additives and on ways to evaluate one product versus another, an issue that consumer protection entities must address. Like all other chemicals, some of these additives may be harmful during long-term exposure, even if classified as safe at certain concentrations. Artificial food colors are among the substances that have adverse effects on children.

Hazardous influences we are exposed to emanate from agrochemicals, food additives, and radiation; they are caused by the habit of smoking, harmful substances in our water and sanitation systems, air pollution, and climate change. It thus has become close to impossible nowadays to live a healthy life.

Radiation, including ionizing and electromagnetic radiation, can negatively impact health. While natural radiation comes from the sun, our bodies have largely adapted to it. During my university studies, some of my professors repeatedly advised us to avoid exposure to ionizing radiation. Yet, medical doctors frequently prescribe unnecessary x-rays and CT scans while it is known that extensive exposure can cause genetic alteration, particularly in young people and children.

Electromagnetic radiation can come from many devices we now use daily, such as cell phones, routers, radar, smoke detectors, and cell phone towers – that are supposed to be located outside residential areas, unlike what we see today. Again, industry lobbying largely affects the enforcement of stricter government regulations and legislation, while research on the health effects of exposure to electromagnetic radiation remains ongoing and very controversial.

Radiation from nuclear activities is a topic that I wish to leave for others. Its significance on mortality and morbidity is evident. Radioactive leaks are often covered up, and excuses always arise when they are detected.

Water and sanitation seriously impact our health, and due to the prevailing water scarcity, this issue is of great importance in the Middle East. Freshwater resources are scarce, and many of them have been over-exploited to the extent that the water has turned brackish and can be used neither for drinking nor in agriculture. Unwise policies have led to a real problem in efforts to provide fresh water to people and for agriculture. While wealthy countries have resorted to desalination to try to solve this problem, this method is not feasible in Palestine due to its high running cost. 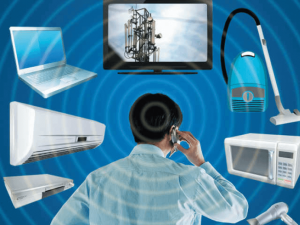 The situation in Palestine is critical, as the demand for fresh water is increasing and resources are limited and dwindling. The per-capita consumption of fresh water in Israel by far exceeds that of Palestine, while Israel exerts total control over all water resources, including those in Palestine. The future does not look optimistic, especially as the effects of the ongoing climate change include late and limited rainfall, the main resource to replenish receding groundwater levels and dwindling natural springs. Ambitious projects to transport water from other countries have all collapsed due to high costs and the political situation. Millions of dollars have been poured into studies that from the start were doomed to fail. The last among these is the Dead-Med canal, where water was envisioned to be transported from the Mediterranean to the Dead Sea.

Wastewater treatment is very limited in Palestine. Even in Israel, wastewater and raw sewage find their way to freshwater resources and the sea. Swimming areas are closed frequently due to high microbial loads. Underground water resources in some areas are contaminated not only with microbes but also agricultural and industrial chemicals.


To improve the water situation, funds must be redirected urgently and poured into rational projects that provide fresh water at affordable prices to the population as well as treat wastewater to make it safe for recycling, mainly for agriculture and industrial use.

Increasing air pollution poses a significant concern for our health. According to the WHO, an estimated 7 million people die annually as a result of air pollution. Its effects manifest themselves in subtle ways that may not always be evident to health professionals. Children and young people are particularly affected. Diseases such as emphysema, certain blood cancers, including leukemia, and behavioral changes are among the more evident manifestations of exposure to air pollution.

Sources of air pollutants are abundant and include vehicle exhaust from internal combustion engines, smoke from burning organic matter, and dust from human activity, as dust and sandstorms are increasing due to climate change and desertification. Routes of exposure to these pollutants consist mainly of breathing in particulate matter through polluted air. Particles smaller than PM2.5 and PM10 micrometers can reach the deep areas in the lungs; they form a particular public health concern because they may travel via the lungs to the bloodstream and manifest their effects on a variety of organs.

Climate change is directly tied to biodiversity. There are three schools of thought regarding the cause of climate change. Some argue that it is a cyclic natural phenomenon, the second school believes that climate change is caused by human activities, and the third school asserts that it is a combination of both. Whatever school of thought we adhere to, the fact is that our climate is changing, affecting every aspect of human life and that of other species. Glaciers are melting, the seas are rising, unusually violent storms are happening more frequently, biota is losing its habitat, and some species either have entirely disappeared or are struggling to survive.

One can easily ask, “So what?!” Unfortunately, life is very interdependent, and the loss of biodiversity translates into a lower quality of life and increased mortality and morbidity also among humans.

Limited water supplies directly impact the health and well-being of any population.

To allow humanity to survive better and prosper, humans must seriously rethink their current strategies. What is good for one country is beneficial also for another. Inappropriately, the accumulation of wealth by economically prosperous countries is frequently accomplished at the expense of less affluent countries. But whether we are well-off or not, the cocktail we live in is bound to hit us all eventually. It will cause a drastic decline in healthy living unless we wake up to the distressing fact that we have altered the earth and must make serious efforts to ameliorate this situation. Otherwise, we are bound to choke on the cocktail we have created.