The installation of over 578,500-megawatt (Mw) globally and 5,500 Mw of solar photovoltaics (PV) capacity in the Middle East represents nothing less than a breakthrough for energy security and sustainable development in the world.*1

Located in a region that is abundant with the sun’s irradiation, Palestine has high sunshine hours throughout the year, with the total annual average exceeding 3,000 sunshine hours*2 and irradiation levels ranging between 5 and 6 kWh/m² per day.*3 Such conditions are considered excellent for harnessing solar energy in large-scale and stand-alone applications. Furthermore, the global cost of solar power is continually declining, as the cost of installing solar PV has dropped by approximately 80 percent*4 since 2010 – making it more attractive to potential investors. 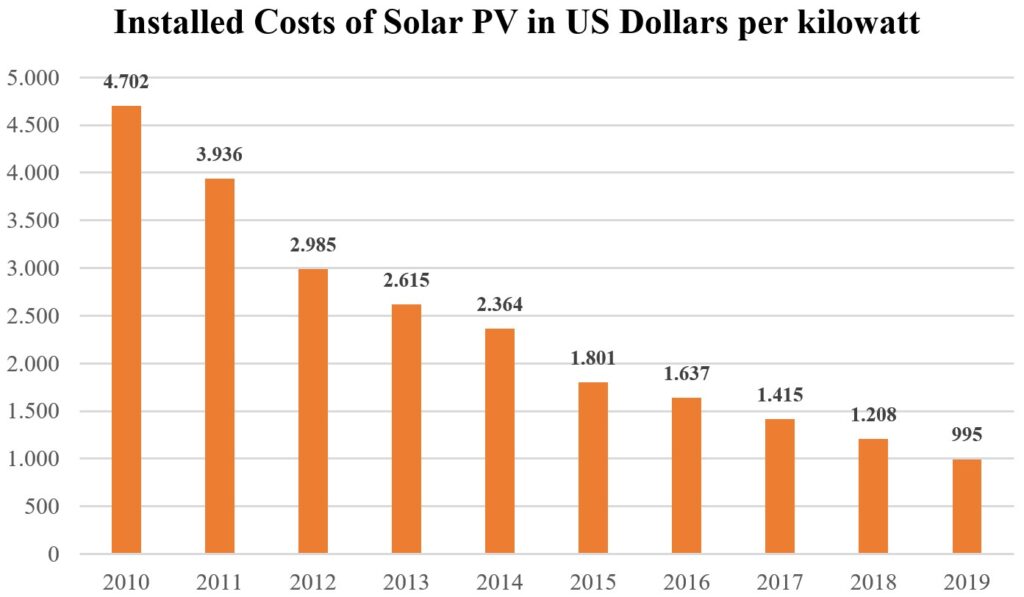 Despite holding enormous potential to generate energy at affordable rates, solar energy projects remain limited in Palestine. The risks for investors are high and numerous – due to lack of stability driven by Israel’s relentless control over Palestinian land, movement, trade, and natural resources. The harsh economic and political realities have created a less than desirable investment climate, exacerbating market fragmentation and uncertainty towards solar energy investments.

Solar projects are booming globally and in the Middle East, in particular.

The scalability of solar power requires large swaths of land and electricity grids that integrate power generation sources, the transmission of electricity, and distribution networks to redirect electricity to demand centers. To date, Israel maintains full control over 61 percent*5 of the West Bank, known as Area C, which has the largest technical potential for solar energy in Palestine, with a capacity to potentially generate 3,000 Mw,*6 constituting more than 83 percent*7 of the West Bank’s renewable energy potential.

A case in point is Jordan’s 52.5 Mw Shams Maan solar park – one of the largest in the region – which generates enough clean energy to power an average of 35,000 Jordanian homes.*8 This case amplifies the lost opportunity that could have been earned if Palestinians were permitted to access Area C for solar power development. On the other hand, areas A and B offer far less technical potential and land availability, due to competing demands for other uses such as urban, commercial, and agricultural development.

In addition to inaccessibility to land in Area C for solar energy development, there is no significant high voltage transmission infrastructure in Palestine. Israel’s supply of electricity to Palestinian towns and cities has been historically distributed via 270 medium-low voltage interconnection points,*9 creating a highly overloaded electricity network with significant technical losses. Because of the lack of electricity backbone, Palestinian consumers pay higher tariff rates of US$0.09–0.10 per kilowatt hour (kWh) than high-voltage customers in Israel.*10

Due to these circumstances, the energy sector in Palestine, like the Palestinian economy in general, has been characterized by an asymmetrical dependence on the Israeli economy. Palestine is heavily reliant on Israeli energy imports to meet over 95 percent*11 of its electric power needs with an annual bill of more than $650 million for electricity.*12 Making matters worse, the emergence of the COVID-19 pandemic, coupled with the PA’s financial crisis due to not receiving the monthly Palestinian customs revenues, has created a sharp fiscal deficit of US$800 million (4.6 percent of GDP),*13 a financial gap estimated to be more than $1.5 billion,*14 and has effectively weakened investor confidence in the Palestinian market.

It thus becomes clear that breaking this vicious cycle can only come through implementing innovative solar business models to challenge the harsh political realities and serve as an engine for energy security and economic growth in Palestine.

The good news is that rooftop solar enjoys a wide array of advantages and can contribute to Palestine’s energy needs – from its nature that utilizes the rooftops of existing buildings without demanding land availability to generating electricity, without requiring significant changes to the transmission infrastructure.

Strategically, the Ministry of Education (MoE) realized the immense potential of the model and launched a national program for installing rooftop solar systems in public schools in Palestine. Through a collaborative partnership between the Palestine Investment Fund (PIF) and the MoE, Massader (PIF’s energy investment arm) was selected to finance, install, and operate the rooftop solar systems in partnership with the main electricity distribution companies.

Recognizing the prospects of this program in rejuvenating the economy and enhancing job opportunities in Palestine, the international financing community provided massive in-depth financing and expertise. The financing package includes a US$2 million grant from the World Bank as a component of the Finance for Jobs (F4J) program, with additional loans of US$15 million and US$18 million from the International Finance Corporation (IFC) and the European Investment Bank (EIB), respectively.

This national program aims to install solar systems on up to 500 public schools, with a capacity of 35 Mw by 2023. So far, the first phase of this project has installed rooftop solar systems in 31 schools in the Ramallah, Bethlehem, and Jerusalem governorates. The implementation of phases 2, 3, and 4, comprising 120 schools, will be carried out later in 2020.

Massader’s success in the schools’ solar program has been made possible through building a collaborative model between the MoE, Massader as a developer, the three largest electricity distribution companies (JEDCO, HEPCO, and NEDCO), and the Palestinian Energy Authority and Regulatory Authority. The engagement of all stakeholders led to the adoption of a new and innovative solar hybrid model, combining a power purchase agreement (PPA) and a net metering scheme. The purpose of such a combination was to enable reaping economies of scale and creating the highest added value possible for all relevant stakeholders in this project.

Under a hybrid model, the benefits of the schools’ rooftop solar project are multifold.
• For developers (Massader), it overcomes the need to access large swaths of land through utilizing full solar capacity in smaller spaces such as rooftops, whilst incurring lower land and grid interconnectivity costs, compared to investing in solar utility-scale parks.
• For distribution companies (DISCOs), it reduces dependence on the Israeli grid, enhances grid stability, and decreases power cuts.
• For schools/MoE, it creates significant savings on electricity bills, thus improving the educational budget, allowing investment in vital resources.
• For the energy sector and economy at large, it reduces dependence on Israel, creates independent national generation capacity, contributes to the development of the renewable energy sector in Palestine, and creates jobs.

Deploying a solar PPA and a net metering scheme, Massader as a developer arranges the design, financing, installation, and operation of solar systems on schools’ rooftops through local contractors. These systems will generate clean energy for 25 years, the lifespan of the PV panels. During this period, the schools cover their electricity consumption needs on an annual basis – free of charge – consuming up to 18 percent of the generated electricity, while any excess energy not consumed from that quota will be credited to the MoE’s next billing cycle. The remaining 82 percent will be sold to the DISCOs at a fixed tariff that is more competitive than the prevailing tariff for electricity imports from Israel.

Under a PPA contract, the core element that governs the sale and purchase of electricity is project bankability. In order to attract lenders willing to provide financing, it is crucial for the DISCOs to be creditworthy buyers that provide consistent cash flow to service the debt used to develop the project. Due to the risk that project bankability presents, lenders typically acquire a range of guarantees and credit enhancements from the PPA’s sellers and buyers of electricity.

Following a net metering billing scheme, a moral hazard risk may emerge, hampering the success of the model. With the realization that electricity generated on the school rooftops is free of charge, it is expected that many schools will attempt to increase inefficient consumption and expenditure of the electricity without incurring any costs. To account for such burden and to encourage energy efficiency, the net metering scheme created a quota of 18 percent that is higher than the current consumption patterns of schools. This enables the MoE to install air-conditioning or heating systems in schools without having to worry about the heavy electricity costs generated by these systems. At the same time, any unutilized quota will be credited to the MoE, which can be used as petty cash for schools, thus creating incentives for energy savings.

Despite the massive potential of the hybrid model in advancing the Palestinian energy sector, there is a popular misconception that net metering will negatively affect the DISCOs bottom line by reducing their revenues. While such an argument would be valid if all electricity users installed PV solar systems on their rooftops, the solar market is much smaller than the conventional electricity market. Ultimately, solar is dependent on the availability of daylight and constant sunshine, which are not always available, whereas electricity distributed by the DISCOs is expected to be continually available. This implies that while solar customers may enjoy lower electricity bills under a net metering scheme, they will always have to rely primarily on the DISCOs’ services.

Towards a public-private-partnership framework

The success of this national program necessitates the implementation of a well-designed public-private-partnership (PPP) framework that ensures the provision of an enabling regulatory environment as well as competitive and sustainable business models.

Under a PPP framework, there are five main recommendations for scaling up rooftop solar investment in Palestine.

The schools’ rooftop solar program is part of Massader’s umbrella solar program – Noor Palestine. With an investment portfolio of US$200 million and a total capacity of 200 Mw, Noor Palestine aims to provide about 30 percent of the West Bank’s electricity upon completion. In addition to the schools’ rooftop program, Massader is leading the development of utility solar parks in Palestine. With a total capacity of 16.5 Mw, the solar parks spread across three geographic locations in the West Bank, including the Jericho plant of 7.5 Mw, the Jenin plant of 5 Mw, and the Ramallah plant of 4 Mw.

Through cooperating with the distribution companies, Massader assumes all the risks associated with the development and construction of these parks and ensures a proper connection to the grid.

Ultimately, the road to scaling up solar energy has not been straightforward for Massader. From combining various solar business models to pushing for new solar legislation and bearing significant development costs, Massader accepted the investment risk to improve solar competitiveness in Palestine. Understanding that the challenges facing solar power projects may deter investments in Palestine, Massader believes that achieving energy diversification, affordability, and independence necessitates innovative solutions that are responsive to Palestinian market dynamics.