The Arabic Orchestra, established by The Edward Said National Conservatory of Music (ESNCM), is the first Arabic ensemble in the world with such a large number and specific combination of instruments. This creation is the result of thorough experimentation in instrument acoustics, timbre, amplitude, and other characteristics of traditional Arabic instruments. A new sound in Arabic music is born.


This new model of a large ensemble or orchestra is an amplification of the traditional Arabic music ensemble, called the takht. The takht traditionally consisted of four or five musicians, one for each of the Arabic instruments that generally accompanied singers: the oud (Arabic lute), qanun (Arabic zither), kamanja (Arabic violin), ney (Arabic flute), and percussion instruments such as the tabla and/or riq. Most Arabic music has emerged from vocal music. In the early twentieth century, purely instrumental ensembles started to perform the introductions to vocal compositions separately from the vocal performances, and a kind of Arabic instrumental genre was born. Since the mid-twentieth century, Arabic music ensembles have grown in a disproportionate manner. While the violins and percussion instruments were multiplied in larger ensembles, the oud, qanun, and ney were kept mostly as single instruments. The balance between the various instruments, and thus the sound of the large ensembles, became dominated by violins and percussion at the expense of the traditional Arabic instruments. Therefore, the sound of traditional Arabic ensembles had changed acoustically. With the introduction in the last quarter of the twentieth century of electronic keyboards that are capable of producing the quarter tones used in Arabic music, the traditional Arabic instruments were marginalized even more, unless they were amplified electronically, by using microphones – before the creation of the ESNCM Arabic Orchestra.

The Arabic Orchestra is a model orchestra based on a groundbreaking study that, for the first time, explores the sounds of this large number and special combination of instruments.

An essential part of creating the orchestra was practical scientific research: Each instrument’s sound waves were measured, and the strength of the sound produced by each instrument, both individually and when combined with instruments of the same type, was calculated in order to determine how many instruments of each type were required to ensure balance in the orchestra. To enable traditional Arabic instruments to be heard, it was necessary to amplify them.


The specifications of the sound that emanates from the ESNCM Arabic Orchestra and determining how many players of each instrument are needed to form an ideal balance make up the ongoing experiment that is based on the physics of sound and that depends on the acoustics of the various concert halls, as the conservatory seeks to develop the orchestra’s composition to reach the best results. The orchestra functions on the principle of a natural balance among the different groups of instruments – without amplification or technical interference. The timbre of the different instruments and their unique sound quality and pitch are taken into consideration, especially when compositions and arrangements of traditional music are created for this orchestra.

Thus, the Arabic Orchestra specializes in playing Arabic music, much of which is written specifically for it, even as it also performs pieces from the rich Palestinian and Arab heritage that have been arranged for the orchestra by Palestinian composers and arrangers. A group of composers has been assigned to compose the music that the orchestra will perform in each new concert. The orchestra also searches for written works that are based on the Arabic maqam, and the arrangements of these compositions for the orchestra’s various groups of instruments tend to be based on the maqam rather than on Western-style harmony. 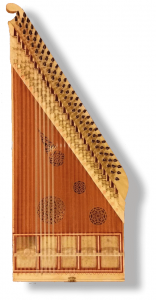 The orchestra’s musicians rehearse and perform under the baton of Suhail Khoury, one of the co-founders of the ESNCM, who has served as its general director since 1995. The musicians are young Palestinians, most of them students, but conservatory teachers join in as well. Some of the music produced for the Arabic Orchestra has been composed by students, giving young composers the great opportunity to compose for large mixed ensembles and experiment with different timbres. To have their works performed by such a large and successful ensemble is an added value for these aspiring young Palestinian composers.


The creation of the orchestra has provided an important platform for Arab musicians and students in Palestine. Students now have the chance to participate in another large ensemble in addition to the existing small Arab music groups. All students perform regularly in such ensembles as part of their educational program. This exposure enables them to work on new and high-quality musical productions while allowing them to reach the public in Palestine, in Arab countries, and throughout the world.

The Arabic Orchestra project furthermore requires an integrated support network and therefore provides professional opportunities for others working in music: in addition to musicians and students of Arab music all over Palestine, it involves composers and music arrangers, technicians and professionals, including technical and administrative directors, sound and lighting technicians, designers, photographers, and volunteers. Many of these have already gained or are able to gain relevant experience, training, and qualifications.

Tareq Abboushi, a buzuq player, conservatory teacher, and the composer of the piece “Nuzha Fi Al Zakira” (A Copy in the Memory), is very happy that one of his pieces is part of the Arabic Orchestra’s current program. “This orchestra, with such a large number of Arabic instruments, is a successful project,” he notes, “and I hope that many young composers and composers like me get the chance to compose works for it. I also hope that the next orchestra tour will travel outside of Palestine.”


One of the arrangers of the compositions, 25-year-old Izzedin Said, helped establish the orchestra and has been engaged in this project since the time when it was just an idea. Thus, he arranged some of the compositions for the orchestra, aiming to deliver the best sound possible for this new type of Arabic ensemble. Izzedin is the academic supervisor of the ESNCM’s Ramallah branch and a qanun teacher who loves his students and has a great rapport with them. His enthusiasm and diligence have helped to bring this project to fruition.

Reem Malki, a 20-year-old vocalist and oud player who recently obtained her eighth-degree diploma for this instrument enjoys her participation in the orchestra because she values it as a time to gather with her friends from other branches and conservatories. “Also,” she said, “this experience gives me the opportunity to play music even after graduation.”

While the COVID-19 pandemic forced the conservatory to delay the launching of the Arabic Orchestra, the extra time was utilized well for further preparations and for the commissioning of compositions and the arranging of pieces for the orchestra to perform. They were completed in 2020 and over the first few months of 2021, with rehearsals starting in June 2021. The concert tour that marked the launching of the orchestra took place in November 2021. After successful first concerts in Ramallah and Bethlehem, the orchestra performed also in Jerusalem, presenting one of the largest musical concerts since the beginning of 2022. It is a true challenge for the orchestra to bring together around 70 musicians from Jenin, Nablus, Ramallah, Bethlehem, Beit Sahour, and Jerusalem – and for everyone to get permission to enter Jerusalem. But they were able to enter the city and to play on the stage of Yabous Cultural Centre’s Faisal Al Husseini Hall in a performance that included a new orchestra lineup and new musical arrangements of compositions by Palestinian musicians. The hall was crowded and the audience enjoyed and interacted well with the music.

In this debut concert tour, the Arabic Orchestra played compositions by Marcel Khalifa, Simon Shaheen, Yousef Zayed, Tamer Al Sahouri, Issa Boulos, Khaled Soddouq, Diaa Rishmawi, Tareq Abboushi, Ahmad Al Khatib, and Suhail Khoury. Almost all these composers are Palestinians who live in Palestine or abroad; they are well-known and experienced composers and musicians. The program also included traditional songs that are part of the Palestinian heritage and familiar to the audience, who sang and clapped along with the orchestra. It was great enjoyment for everyone!

The entire experience was a success, as it brought together young and old musicians and gave young Palestinians the opportunity to compose, arrange, and play music. The players and students are looking forward to inviting their friends to participate in the next tour of the Arabic Orchestra. Future plans include touring on an annual basis, both locally and internationally.