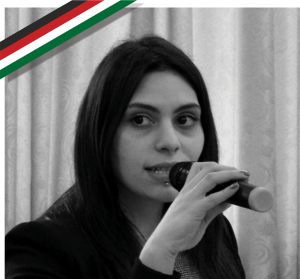 Suha Jarrar passed away on July 11, 2021 at the young age of 30. A fierce advocate for Palestinian rights, Suha’s life and work embodied sumud in the face of immense personal hardships. From an early age, she saw her parents Ghassan and Khalida unjustly imprisoned by the Israeli occupying authorities for their commitment to the struggle for Palestinian liberation. Born while her father was in Israeli prison and under intense interrogation and torture, Suha died while her mother, Khalida, was imprisoned. Khalida was cruelly denied her request to attend her daughter’s funeral. In life as in death, the Jarrar family has been robbed of precious time together. Their plight thus epitomizes that of countless Palestinian families torn apart by Israeli oppression.

Against the injustice of her mother’s imprisonment, Suha championed the rights of all Palestinians to a dignified life and advocated for gender and environmental justice in Palestine. She obtained her BA in environmental and resource studies and women and gender studies with distinction from Trent University, Canada, and her MSc in climate change science and policy, also with distinction, from the University of Sussex, United Kingdom. Upon her return to Palestine, Suha worked as a Climate Change and Gender Officer at the Union of Agricultural Work Committees, a consultant with UN Women, and Program Development and Fundraising Manager at Ma’an—the Forum of Arab Women’s Organizations in the Naqab.

In 2017, Suha joined the Palestinian human rights organization Al-Haq, initially as Environmental and Gender Policy Researcher and then as Senior Researcher and Advocacy Officer. During her nearly 4.5 years at Al-Haq, Suha published a wide range of invaluable research materials, led delegations on numerous field visits to local communities, and represented Al-Haq in international conferences and fora, including the UN in Geneva and New York. Among her significant contributions to human rights work in Palestine, Suha drew attention to the gendered impacts of coercive environments*1 on Palestinian women and girls facing the threat of house demolitions, settler violence, and restrictions on access to basic services, including health care.

In 2019, Suha published a seminal report on climate change adaptation*2 in the occupied Palestinian territory, focusing on the plight of Palestinian communities in the south Hebron hills. Her research exposed the extreme difficulties faced by indigenous Palestinians in implementing community-based climate change adaptation measures due to the continued denial of their collective right to self-determination and permanent sovereignty over natural resources. In this, Suha made it clear that confronting environmental injustice and climate change in Palestine is only possible within a broader struggle against all systems of oppression, notably Israeli occupation, settler colonialism, and apartheid. Globally, Suha stressed the importance of decolonizing the climate justice movement. She embraced the struggles of indigenous land defenders across the Americas and in other parts of the world.

In Suha, we lost not only a courageous Palestinian human rights defender and talented researcher, but also a supportive sister, daughter, colleague, and friend, whose kindness and love overwhelmed all those who crossed her path. Suha’s personal and professional achievements are a testament to the strength of her defiance in the face of extreme injustice and hardships that marked her life and work. Suha will be remembered for her humanity, dedication, passion, and commitment to the struggle for Palestinian liberation. Her memory will remain a legacy for all those who champion the cause of freedom and justice in Palestine and around the world. May she rest in peace.