“Make hummus not walls!” A statement that seems powerful and evocative at first, until you dig a little deeper and discover its hidden encrypted meaning. For the past couple of years, every time I go to Bethlehem and pass the apartheid wall, I look at this statement, written in bold black and white. I wonder how we Palestinians could be okay with this. We actually take pride in selling merchandise such as mugs, T-shirts, and posters that display this slogan to foreign visitors in the Holy Land.

From the moment I first saw this mural, it made no sense to me. Nor does it represent our Palestinian stance. Let’s take a closer look: This statement addresses those who build walls! In our case, and in this particular context, these are the Israeli occupation authorities. They are asked to make hummus instead of walls. I think by now it’s clear where I am going with this. Are we really asking Israelis to make hummus instead of walls? Are we Palestinians willing to betray our culture and identity to attain the most basic human rights of peace and freedom? 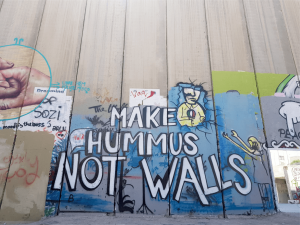 As a Palestinian food writer, I always face this issue in my writing. I feel like a warrior fighting a never-ending battle in which the victor keeps changing. One moment we win, the next we find ourselves overwhelmed with Israeli propaganda that advertises “Israeli hummus” or “Israeli falafel.” Some Palestinians have challenged this claim, others push even further to solidify the Palestinian food identity worldwide. The story of Rawia Bishara and her restaurant Tanoreen in New York beautifully showcases the Palestinian success story. Furthermore, Sami Tamimi and Tara Wigley’s cookbook Falastin recently won the Fortnum and Mason Food and Drink Awards 2021. Such people give us hope that Palestinian food identity can make its mark on the map. But I digress.

Let us go back to the main point. In my opinion, the victor is obvious, and I came to this conclusion after a very simple observation: Israelis always feel the need to put the word “Israeli” before any dish they steal, e.g., Israeli salad, Israeli hummus, Israeli falafel, Israeli shakshouka… the list is endless. To us natives, on the other hand, falafel is simply falafel, salad is just salad, and hummus is hummus. The fact that they feel the urge to label everything as “Israeli” doesn’t make the dishes theirs. It’s like going to a restaurant in Italy and asking for Italian carbonara, as if “carbonara” weren’t Italian enough. Or going to India to order “Indian” chicken tikka masala.

Make hummus, not walls – an invitation for appropriation in disguise.

This labeling, in my opinion, may stem from the fact that what is referred to as “Israeli cuisine” is a combination of cuisines across a wide range of versatile independent cultures. Since the start of Jewish migration to Palestine in the late 1800s, later on in the 1940s and 1950s, and ongoing since then, all Jews who immigrated to Palestine came with their own unique culture that reflects their country of origin. Ashkenazi Jews, for example, came from a European background, thus their main cuisine was heavily influenced by European traditions such as German and Polish cuisines. Mizrahi Jews on the other hand shared traditions that are similar to those of Arabs because they lived together in similar environments, hence the similarities in cuisines. In fact, many Mizrahi Jews who originate from the Levant, Iraq, Yemen, or North Africa consider the local Arabic food to be their cuisine because they were well integrated in their respective societies; the only difference could be traced to religious customs, such as kosher foods. Unfortunately, after 1948, the Zionist movement had to find a way to unite all these unique and extremely diverse cultures to support its narrative of one people, claiming that all Jews are originally from Palestine! But I think that backfired on them big time. Just as European Christians can’t claim turkey as their tradition just because they eat that on Christmas, not all Jews can claim hummus because they believe that God gave them this land. If the previous sentence makes no sense to you, rest assured, it shouldn’t! Because the argument used by Israelis to claim that hummus is theirs is nonsense for the obvious reason that not all Jews are from Palestine!

So, what now? Well, for starters, we Palestinians must acknowledge and fully understand the hidden agenda behind propaganda, campaigns, and slogans such as “Make hummus not walls.” The fact that we are proud of it makes no sense. Whoever wrote this, be it a foreigner or a Palestinian, reminds me of what the Zionist agenda has been and still is trying to do. This person is spoon-feeding food and cultural appropriation to Israel. And while many argue that this mural is a gesture of peace, coexistence, and hope for freedom, as far as I’m concerned, it is not. I will never sell my cultural identity at the expense of my basic human rights. My freedom and peace have nothing to do with my hummus.

Now, after all this, you might be surprised that I want to keep this mural drawn on the wall. This is simply because it is placed on a wall of shame, further emphasizing its pathetic meaning. I hope that one day this wall will fall, and with it, the mural and all its meanings.