Until 1869, Jerusalem had only one court of law; it was presided over by a judge who ruled in accordance with Shari’a law. He was called the qadi of Jerusalem and was nominally appointed by the Ottoman sultan. The qadi had the authority to appoint deputies, including those authorized to preside in the major towns of the jurisdiction. This jurisdiction covered the region that extended from Safad to Irbid, Ajloun, and Salt in the north and east down to, and including, Gaza in the south.

Shari’a law was developed over the centuries by numerous religious scholars of various ethnic origins. It is based on the Holy Qur’an and on the authenticated Traditions of the Prophet (what he said and did). Shari’a law, as it developed, covered all aspects of a citizen: physical, mental, material, and spiritual well-being, as well as matters of procreation (i.e., family affairs). It was independent of the political authority of the Muslim state. Such was the case in all past eras, including the Ottoman period until the onset of their Tanzimat in 1839. The Tanzimat period witnessed numerous Sultani Orders that were issued mostly without reference to the religious establishment. These orders aimed to combat the huge challenges brought about by the financial and military collapse of the Ottoman state, particularly after the disastrous financial consequences of the Crimean War (1853–56). The Tanzimat orders were largely related to matters of finance, trade, banking, etc., and based on European models and standards, which had a drastic effect on the Muslim nature of the Ottoman state and contributed to its transformation.*

Tanzimat laws also had very profound effects on the Jerusalem Jurisdiction. The Land Law of 1858 privatized waqf land and town assets of public waqfs of major mosques and religious institutions while permitting private waqfs of citizens and non-Muslim institutions. This eventually led to the purchase of much land and assets by European institutions and the Zionist movement, particularly after 1869. In that same year, some 85 percent of Shari’a law was replaced by Sultani Orders as introduced by the civilian majallah law and other state laws. Civilian courts were introduced and presided over by civilian judges. Shari’a law was confined to personal matters and applied to Muslims only, presided over by Shari’a judges. It is worthwhile to note that despite all the introduced Tanzimat laws, the Ottoman state failed to arrest the deterioration of the state and of its financial and military affairs. The Ottoman state officially declared bankruptcy in 1876.

What follows is a description of some aspects of the judicial Muslim procedures that prevailed prior to the introduction of the Tanzimat, specifically prior to 1869. These did not differ from those that prevailed during the Mamluk, Ayyubid, and previous eras.

A presiding judge signed all documents issued by his court. Each signature was stamped by the seal of the judge. Whereas some 330 qadis and some 250 deputies presided in Jerusalem during the Ottoman period (1517–1917), each had his own unique seal. All documents were recorded in court records of the town. During this period, these comprised no less than 165,000 pages in which some 500,000 entries were recorded. These valuable archives have survived. Judges did not sign the individual recorded entries but usually signed beneath their last entry at the end of their term of office.


Judges had ranks. The qadi of Jerusalem held the highest rank. He appointed deputies to preside over all types of cases. They were known as muwalla khilafa (مولى خلافة), deputized qadi. The qadi of Jerusalem also appointed deputies that would preside over special types of cases, such as drawing orders of inheritance (قاضي المواريث), or rule over one case only. They were referred to as “deputy” (النائب). The Jerusalem qadi also authorized judges to tour surrounding villages and preside over the cases raised there, much like circuit judges of England in the past. These were called touring judges (قاضي النواحي). All these titles were included in their signatures, as shown below.


Signatures of judges were written in a neat form in Arabic even though the majority of qadis were of Turkish descent. These signatures always included the qadi’s name that was predominantly in Arabic. Signatures developed in style such that by the end of the eighteenth century, they became more elaborate, as shown below.


Each judge had a unique seal. Most religious scholars and town notables also had unique seals of their own. Seals were usually made of stone, hard wax, or copper. They varied in shape but were usually less than three centimeters in size. Prior to the mid-eighteenth century, seals were carved with geometric or floral ornaments. They usually carried messages which included the first name of the qadi. These messages were mostly in Arabic, with others in Turkish.


In addition to the judge’s name, some seals included the date of its manufacture and the name of the artisan house that specialized in seal making, e.g., “Haqqi حقي,” “Arabi عربي,” and “Rahmi رحمي.” 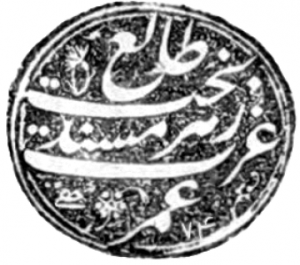 
This article is based on an Arabic book by the author titled, The Judges and Court of Jerusalem, 1517–1917 (in Arabic: “قضاة القدس الشريف ومجالس حكمهم 7151-7191”).
It may be obtained from Educational Bookshop (المكتبة العلمية), Saladin St., Jerusalem.

*Until 1869, the Ottoman state was a Muslim state.