Arevolutionary thinker and an inspiration to many, Shafeeq Ghabra is one of the few people in the world who has gone from freedom fighter to professor. Born into the post-Nakba generation, his story – of being raised as a Kuwaiti to parents that were originally Palestinian – is one of diasporic heartache and exile. His father Dr. Nazem Ghabra was a highly successful cardiologist in Haifa, Palestine before arriving in Kuwait in 1952. He later became the personal cardiologist to the emir and crown prince of Kuwait. When Ghabra and his father became full citizens of Kuwait, there was a sense that the Palestinian Naqba’s wounds would never heal. 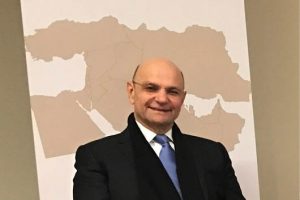 Ghabra sought to heal these wounds through his activism during high school in Kuwait and throughout his undergraduate studies at Georgetown University in Washington, DC, 1971–1975. He never spoke about his military experience until he published his memoir An Unsafe Life (in Arabic) in 2012 with Saqi Books.

In the book, Ghabra gives a detailed account of his life as a Palestinian freedom fighter in Lebanon during the 1970s. His new life as a young revolutionary entailed a six-year commitment to military service with the Palestinian resistance movement that fought to reclaim Palestine for all Palestinians who had been expelled from their homeland by Israel during the 1948 and 1967 wars and after.

He commanded an important section of the Student Battalion in South Lebanon until 1981 under the leadership of Yasser Arafat, the leader of the Palestinian Liberation Organization (PLO) and Fatah. In turn, Ghabra witnessed and participated in an important era of Palestinian and Arab activism that laid the foundation for the politics of the Arab world till today. In August 1981, he left South Lebanon and returned to the United States to complete his PhD at the University of Texas at Austin.

His career took him in many directions. First, he was the director of the Kuwait Information Office from 1998 to 2002. He then went on to establish the American University of Kuwait (founding president) from 2003 to 2006. Today, as a professor of political science at Kuwait University, Ghabra enjoys teaching and research. Ghabra is the author of nine books and dozens of journal articles and newspaper articles; he has given television and radio interviews, as well as guest lectures at renowned universities and centers worldwide.

He is a frequent political commentator on many networks, including Al-Jazeera, the BBC, and many other outlets such as CNN and Fox. His editorials have appeared in The Washington Post and The Wall Street Journal, and he is a social media influencer on Twitter.

Ghabra was also a recipient of the highest award for Scientific Research in the Humanities and Social Science from the Kuwait Foundation for the Advancement of Sciences chaired by the Emir of Kuwait, January 1997. Prior to that he was also the recipient of the Outstanding Academic Book award (1989) from Choice for Palestinians in Kuwait: The Family and The Politics of Survival. 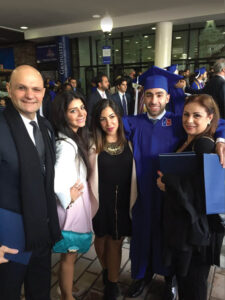 Today, with the normalization between Israel and a few Gulf Cooperation Council countries, Ghabra reminds us of the need to continue the fight for the Palestinian cause, whether it be through resistance, freedom fighting, or academia. His visionary inspiration inscribes him in the books as one of the most progressive thinkers of the century.