Autobiographies give a unique eyewitness account of historical events experienced by one particular person, an account of a life with all its ups and downs, struggles and failures, successes and setbacks. They invite us to look at history not from a distant bird’s-eye view, but through the eyes of one person’s own personal reality. Tawfiq Canaan started to write his autobiography in English in a pharmaceutical diary dated 1956, just a few months after his retirement in May 1955. Although still in good health, he must have had the feeling that time was slowly running out, that life was slowly but surely fading away, and that he had a story to share with his family, friends, and the visitors who were always eager to hear from him about socioeconomic and political events. It must have taken him only a few months to write his memoirs.

Canaan recounts a very rich life and offers fresh insights into the family story of someone who played an important role in the cultural life of his country. He recalls the socioeconomic and political history of Palestine through the unique prism of his access to different strata in Palestinian society, something few others could replicate. Canaan’s autobiography spans a period of seven decades of Palestinian history, from the late-Ottoman to the early-Jordanian period: a condensed history of the whole country of Palestine. Through his words, we live the history of a whole nation, we feel the tectonic shift that took place in Palestine as one empire replaced another and as Jewish immigrants replaced the displaced Palestinians. The personal element in this autobiography is incomparable with historical and political analyses. 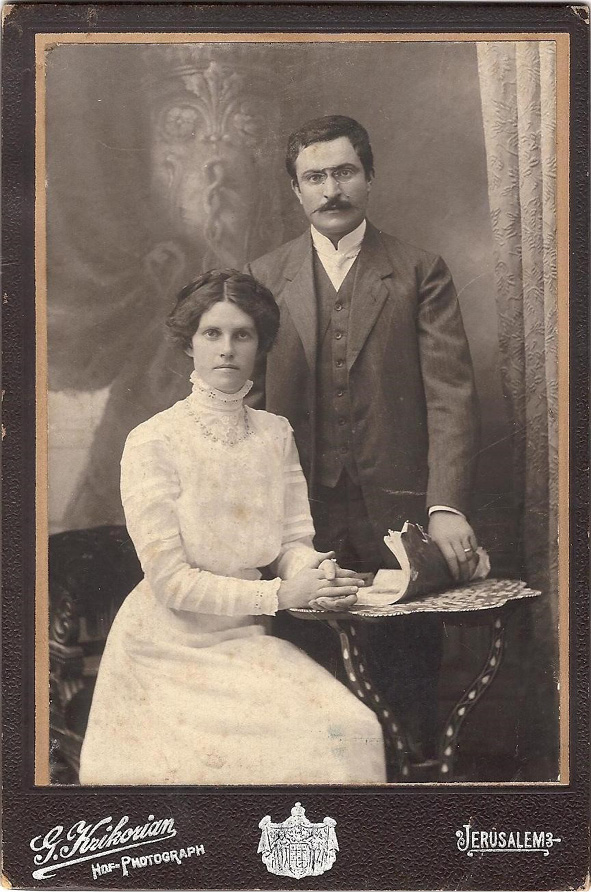 Tawfiq was a PK, a pastor’s kid. His father Bishara was the first native Arab Lutheran pastor in Palestine. He worked as a medical doctor at three Protestant institutions: he started his career at the Deaconesses Hospital of Kaiserwerth; then he directed the Leper Home owned by the Moravian Church; and he ended his medical career at Augusta Victoria Hospital run by the Lutheran World Federation.

Canaan describes the life of an (upper) middle class Palestinian milieu where members were multilingual. Canaan composed about 100 short musical pieces, many of which were played in the YMCA concerts under the name Taucani (Tau[fik] can[aan] i). Unfortunately, all his compositions were lost with the loss of his house during the 1948 War.

His autobiography is a fascinating exploration of hybrid identity. The Canaan family roots were in Kfarshima on Mount Lebanon, yet Canaan, born in Beit Jala in Palestine, voluntarily chose Palestine as his destiny and fought for its cause. He served with the Ottoman army as a medical doctor while secretly hoping that the British would replace the Ottomans. After the British declared the Mandate over Palestine, Canaan went on to oppose their policies that gave preferential treatment to Jewish settler immigrants. The rapidly changing context in late-Ottoman Palestine, through the British Mandate period and the Nakba, ending with the West Bank becoming part of Jordan, required Canaan to adopt a dynamic identity that shifted and evolved over the years. In this sense, his autobiography is a story of Palestinian resilience in the face of all odds and challenges. 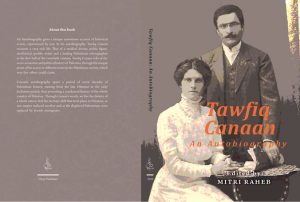 Through Canaan’s life, we can trace the development of the Palestinian national identity. In the 1930s, Canaan started to draft political pamphlets. His most important political writings are the two pamphlets, “The Arab Palestine Cause” and “Conflict in the Land of Peace,” both printed during 1936. As a Palestinian Arab Christian, a well-educated intellectual with a credible career, and well connected to the Palestinian and international elites, Canaan felt he was predestined to advocate on behalf of his people to the international community. Canaan used these pamphlets to criticize the preferential treatment of the Jews by the British Mandate and the international community. He advocated for equal citizenship for Arabs and Jews, with Christians, Jews, and Muslims in a binational state based on a parliamentary system of government.

For Canaan, politics was first and foremost to care for the polis, the community. Politics was not so much a form of rigid nationalism but a love for the country, its landscape, history, culture, and people. It was a commitment to the community. It was this dedication to the community that kept Canaan in Jerusalem during the Nakba when most of the younger doctors left. Throughout his life, Canaan felt that he had been called to help the underserved, the sick, the lepers, the poor, the refugees, and the peasants.

Canaan provides important information about socioeconomic developments and cultural life in Palestine over seven decades. He describes the conditions prevailing in the country under Turkish rule and how people traveled from Jerusalem to Jericho or Beirut, how much time it took, and the forms of transportation used. It is fascinating to read about the huge changes in transportation over seven decades through a personal lens.

Canaan’s autobiography is a treasure for researchers working on the historical development of the health sector in Palestine. It describes the Christian mission hospitals, Jewish hospitals, and community health projects in times of war. His contribution to research on popular medicine, the treatment of malaria, and the eradication of leprosy in Palestine cannot be emphasized enough. Further research is needed to shed light on Canaan’s role in this field.

In Palestine, Canaan is well known primarily as an ethnographer. His writings that document Palestinian customs, popular medicine, and religious superstitions attracted the attention of Palestinian researchers. Canaan was one of the most productive intellectuals of Palestine in the first half of the twentieth century. He published over 130 articles, 5 books, and several pamphlets that cover the health sector, folklore, and political developments. Most of these pieces were never studied in depth and thus can provide a rich resource for future researchers. Canaan probably developed his interest in social customs from his father, who began working on this topic before his premature death. This interest was also related to the realization that around the turn of the century, Palestine was undergoing rapid transformation. Many of the customs that were already lost in the cities survived in the villages and among Palestinian peasants but were under threat from the modernization taking place in Palestine around World War I. Canaan saw a window of opportunity to document as many of these customs and traditions as possible for future generations.

In Palestine, Canaan’s ethnographic role was rediscovered, especially in the 1970s when the study of Palestinian folklore emerged and the Journal for Heritage and Society (Majalat atturath wal mujtama) was launched. Renewed interest in Canaan was evident in the late nineties, triggered by the permanent exhibition of the Canaan amulet collection at Birzeit University Musium. Dar al-Kalima’s international conference on “Palestinian Identity in Relation to Time and Space” in Bethlehem in 2013 was an important milestone in setting the stage for interest in Canaan based on newly discovered material. It was at this conference that Dr. Fauzi Mantoura, Tawfiq Canaan’s grandson, announced the discovery of a handwritten manuscript by Canaan: his autobiography written in English. Dr. Mantoura was gracious enough to give us the manuscript and the rights to publish it, thus making them available to the public. The publication was made possible by the generous support of the Konrad Adenauer Foundation office in the Palestinian Territories. 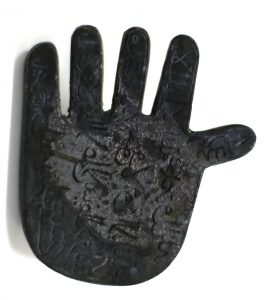 Palm Stamp: A Palm-shaped stamp with religious writings and prayers (Duaa), and a flattened knob placed on the back. It was obtained in 1942 for 300 mils.
Usage: Stamp. Materials: Copper. Dimensions: Length: 8.1 cm, Width: 7.3 cm, Thickness: 0.9 cm.