Before I got involved in the field of journalism and became a TV correspondent, I was an English-language teacher with limited knowledge of politics and the media. I received my bachelor’s degree in English literature and pursued plans to continue in the field of commerce, never expecting that one day I would be able to speak, express, and analyze media and politics the way I do today. In my work as a journalist, particularly as one who lives in a place filled with conflicts and war, I have covered Palestinian protests and clashes as well as the daily struggles and the deteriorating conditions that Palestinians endure. In the beginning, although I found it challenging to have to learn about this career all on my own, it seemed manageable – until the day I had to cover the Gaza escalations. At that point more than ever, I realized that I would be responsible for conveying the truth of events. Each time I heard the bombings, I had to conceal my fear and muster enough courage to photograph the events. I never fathomed that fear could be veiled until I worked as a field correspondent. I’ve learned that it’s actually healthy to be afraid at such times, but it is also useful to put this fear on hold until after I articulate and share the truth. 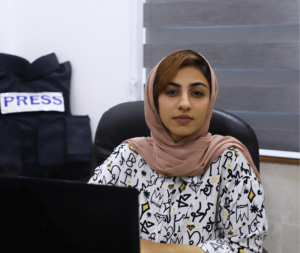 During the last Gaza escalation, I experienced the most significant incident of both my personal and professional life. Despite having covered previous wars in the Gaza Strip, I was not able to experience the last one with my family. I had to be everywhere in order to cover all the events even as I worried about the safety and well-being of my family. I worked around the clock from hospitals to bombed buildings and ended the day at my office, grateful that I had managed to survive another day. One particular day during the 11-day bombardment was the hardest: I had gone home to get some rest so that I could continue working in the morning and to make sure that my family was okay, when suddenly we heard the unbelievably distressing sound of bombing. Israeli airplanes had targeted the building where my family and I live as well as the entire street. Dozens of my innocent neighbors were killed. I could do nothing but try to stop my tears in order to convey the truth and serve as their voice to the world. 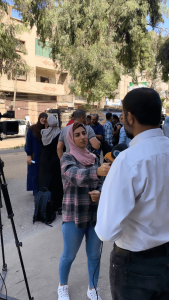 That day confirmed for me that journalism is my passion and the career I want to pursue. Since then, I have worked constantly to share about the victims of the escalation and give them a voice. This has helped me realize that my work as a journalist is not in vain. Journalism has taken over parts of me and changed my personality and perspective, but I have no regrets. I am now more aware of the truth that images convey, and I believe that I am making a valuable contribution to the struggle of my people.