For a decade of my art practice, I was, in some way, focused on the topic of disappearance. During those ten years, I was making map coordinates disappear; I was making the land disappear from actual events – from underneath real Palestinians; I was making memory disappear, calling for forgetfulness through repetition of remembering. I was unsure whether there would be something out there, but it kept flowing out of me without any particular plan. I created videos, installations, performances that tried to open approaches towards perceiving this disappearance. And when you think of me as a Palestinian and a female, then this obsession with “disappearance” will make more sense. I used these statues of disappearance to see better; I guess I wanted to see something else. I wanted to reduce the noise around what a “Palestinian” is. I wanted to see myself better, to see us better, as a people and as individuals who do not need to be filtered through the lens of identity politics, over and over and over again, until we are trapped. I wanted to liberate myself from this burden.

My artist bio described my looking at liminal spaces that have been residing in their liminality for so long that liminality and in-betweenness are the only reality that exists. The last video piece I produced in 2015 was entitled “A tutorial on how to disappear, become an image.” In it, I closed my eyes for the last time on a screen. I realized that I missed people, I missed their voices in my life – and my life really is my practice, my art practice. I could tell you the story of how this missing happened and describe the scene in which my whole practice as an artist collapsed in my heart. One night, I decided that if the world were to fall apart, and I was one of the survivors in a post-apocalyptic future, I would like to be a cook. That exact moment of realization, in the summer of 2016, during an art residency in Tokyo, began the snowball of culinary and life decisions for my art practice and beyond.

In my practice, what excites me are the questions – to play around with them, without wanting to find answers.

Three years ago, I would never have thought that I would create a project called Palestine Hosting Society. But I did. It changed my life. But in five years, my life will be different again, and I might create something entirely different. We come from a place where politics and the future are tough to predict. Things keep changing but at the same time are very static. We cannot even imagine a time with no Israeli state. That’s the struggle: our existence is based on resisting the efforts to erase us.

For Palestinians, nostalgia has always been a very tricky emotional state due to its negative connotations. Some think that we will never keep up with the world because we are very sentimental and nostalgic. We have been engaged in the same struggle for 70 years now, and we miss something that does not exist anymore. The homeland does not exist in the way we imagine it. For my generation, it is important to bring back the space of belonging, knowledge, the relation with the land, the know-how, the seasonal practices, all the things we’ve forgotten over time. Focused on intifadas and survival struggles, the generation before us had limited space to tend to these things. But their struggle cleared the way for my generation to begin from a place where we can bring our relation to the land into the present and produce something of great value for ourselves and our future. Things will never be the same, we might not wear embroidered dresses like our grandmas used to, but if we have the knowledge of what it meant for them, we will respect them more. With the damage that we have caused to the earth and the escalation in how nature is manifesting its harsher face, there are survival tools and sensibilities in ancient wisdom that might save us in a future of scarcity, vulnerability, and uncertainty.

I work with food and find it beautiful. Everybody loves food! We Arabs love food. But Palestinians always feel a certain bitterness because we see how the Palestinian kitchen is being appropriated and taken away from us by Israel, which is building its national cuisine out of it: hummus, falafel, couscous, etc. We are not allowed to collect wild herbs such as zaatar (wild thyme) or akub (the edible root of a thistle). Israeli prohibitions are put in place not to protect the plants but to create a rupture in the everyday practices of Palestinians. These rules and laws aim to prevent us from going to our land and disrupt our direct connection to the land, the soil. They know that once you break this connection and you render the land an abstract concept, then it will be easier to take it away from the people, easier to make us forget our past or our rights and settle for easier solutions. At least that is their reasoning. But I created this project at a time when many young Palestinians are starting to reclaim their land and customs. There are groups that work on agriculture, seed collection and preservation, eco-farming; there are farming co-ops. A new kind of consciousness and awareness is arising and affecting how we deal with our bodies on this land. We feel a responsibility in our bodies in a way that was denied to the generation before us.

The timing was perfect for this project, not only for me in my life but also for the impact that it can have. If you want to talk about disappearing recipes in the middle of a war, it’s not going to work. There are other emergencies. But when you have many groups and individuals creating momentum around specific issues, you’ll get a stronger voice with a louder volume.

When I present a table in Palestine, I focus on one research topic and delve deeply into it. I create the menu to tell a story that is based on the research topic, and I present it slowly to the people. I perform it as I talk. My menus comprise disappearing recipes, and the stories I present are almost lost. I bring them from the past to the table and observe this encounter. At the same time, I don’t limit myself to the space of the physical table: I am very active on social media. That is also part of the project: activating the archives, creating a narrative of reappearing. For me, it is about reminding Palestinians of what we have lost due to the construction of geography. (For example, each part of the West Bank is secluded from the others, and the people living there cannot go to Gaza, to Haifa, Nazareth, Akka, etc.) There are physical borders from which we can’t escape, and the result is that people do not know about each other’s practices. At the same time, the loss of land has made us lose many crops that were central to some recipes and subsequently were no longer cooked. So I bring those stories, not just the recipes. It enables us to look at ourselves in a new way – a way that not only has roots in the past but also is empowering, enabling us to create change in the future.

So I present tables in Palestine for Palestinians. But I am also working on tables outside of Palestine, with a focus on vanishing food practices. Having traveled and shown my work in many different places, I am able to create a narrative that retains its local essence even though it is presented in another place. I find the challenge of addressing diverse audiences exciting.

I want people to have an encounter with a part of themselves that they didn’t know existed.

History, for the longest time, has been written by the nations and gender that hold power, which usually eliminates female power from the equation. I believe that in the last decade, more energy has been created by collective voices who strive to reverse this suppressive narrative and discourse that was never written by the less voiced. But for collectivity to work, each person must be aware of him- or herself as part of the group rather than dissolve into it. The moment we dissolve, it becomes enslavement, leading us to forget ourselves and what we can offer as individuals that is different and unique. 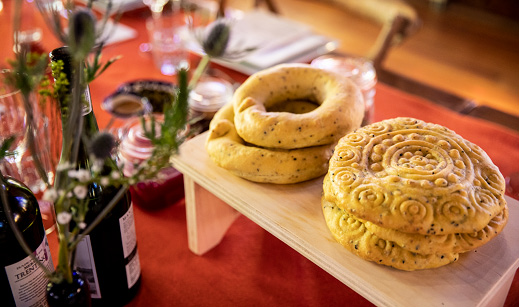 It is a question of equality as well. I believe that collectivity created by women is different from that created by men – the way we cook the food, sit and eat and talk together, the way we communicate and analyze things, the way we respect each other tends to be different from the ways of men. There is less ego in the process and the actions. That’s why for me, the kitchen is a space of empowerment. The way we move through it, process and respect the food, we channel energy. So I believe in collectivity but one that is not patriarchal, one that is not selfish, one that does not have a loud voice, is not black and white. It is more tender and simpler; it keeps reinventing itself. Our bodies are changing all the time.

*This article is based on a blog published by Graylit; the original version is available at https://graylit.org/blog/mirna-bamieh.