Heritage preservation is an issue of identity, on the one hand, and national cultural awareness, on the other. This article will shed some light on the heritage of shrines and sanctuaries that may be found throughout Palestine and present the ideas and attempts to preserve them for future generations.

The hilly country of Palestine offers gardens, orchards, vineyards, and beautiful landscapes for the viewers and wayfarers on its off-the-beaten-track trails who may be seeking the shade of a tree or the freshness of a nearby spring. Among these welcome shelters and trees, there often exist the traces of prophets, revered walis, and sheikhs (religious authorities). These sites have escaped the destruction and ill fate of many of the forests of Palestine, protected by traditions and local belief in their sanctity. According to Toufic Kanaan, a Palestinian writer who lived during the beginning of the twentieth century and researched the heritage related to the sanctuaries of Palestine,  these sites may be the burial place of a well-known prophet, a tomb, a tree, a shrub, a cave, a spring, a well, a rock, or a stone that has been invested with religious reverence.


Almost every village in Palestine has its own saints. Many of the locations where they are revered may be found inside villages, mostly on mountaintops. Others lie outside the dwelling areas but within the boundaries of the land that belongs to the respective villages. These saints are honored by the inhabitants of their village and in some cases also attract the reverence and respect of many others beyond. Some of the shrines that exist in the villages and that are in close proximity to residential areas act as mosques. Hence, they are in good structural condition and subjected to continuous maintenance and care.


Although some shrines exist in valleys, many are on hilltops or elevated spaces, commanding the view of the neighboring areas. It is actually striking that so many of them may be found on uninhabited mountains, resonating with the old notion of the sacredness of high places that may have been transmitted to current Palestine through historic progression. They may not necessarily be obvious or seen from a distance and may also exist at the edges of the mountains rather than on the top. Shrines that exist in valleys are often found at the junction of two wadis or at the mouth of one valley as its path widens.

According to custom and tradition, people, especially women, assemble at every feast in these shrines to pray. 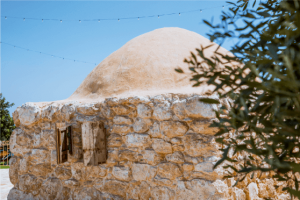 Many shrines or graves of holy men are situated in cemeteries. These shrines are often older than the cemeteries. People would bury their leaders near the shrines to protect them from being consumed by enemies. More recent awlia’ (holy men) might be buried in existing cemeteries and revered after their death.

Some shrines may be built on top of older ruins that include caves, Roman sites, or Byzantine or Crusader churches. Like other shrines, they have been subject to plundering and looting.  Although some shrines or maqams have been rehabilitated, they are looted and plundered again and again by people looking for treasures and precious artifacts.

Numerous attempts have been made to protect these shrines, as they embody many years of Palestinian tradition and history and are witnesses to Palestinian existence. They might no longer receive the same reverence and respect as in the past, especially by the younger generations, but protecting them and investing in their rehabilitation is an investment in Palestinian identity and solid proof of Palestinians’ firm connection to the land, their beliefs, and their heritage.


One of the interesting approaches to the protection of these shrines is to convert them into public parks that provide beautiful space for local residents and visitors alike. Shrines could be renovated, fenced in, and protected from vandalism and misuse. The extended areas around them, which in most cases belong to the Islamic Waqf, may be turned into a picnic area, a children’s playground, a cantina, or a small cafeteria and offer other services such as restrooms and storage areas. It is recommended that shrines should sustain a certain level of regard, respect, and veneration – not necessarily because of their religious value, if any, but more importantly because of their heritage value and their connection to their village’s identity and traditions. The public gardens would provide people with safe and beautiful spaces in which to spend time while simultaneously shedding light on the area’s history and on cultural and religious seasons.


Examples of successful attempts to renovate shrines in Palestine include the Qatrawani Shrine in Atara, near Birzeit; Sheikh Sabe’ Shrine in Burqin, near Jenin; and the Dweir Shrine in Mikhmas, north of Jerusalem. Local authorities and residents have contributed to the rehabilitation efforts in these cases and have made additional investments in parks, children’s playgrounds, and rest areas.

In other cases, such as the beautiful shrine of Nabi Ghaith, looters have continued to destroy all the renovation attempts that have been made. This brings to the surface the need to invest in national cultural awareness. People need to be educated on what it means to belong to a certain village and be part of its identity, both past and future, and engaged as active contributors to the national identity of Palestine.

In any case, converting the sites of shrines and sanctuaries into public parks would likely succeed if the government were to adopt a policy that could be utilized by the various linked ministries, cultural heritage civil society organizations, and local councils and municipalities in order to enhance protection initiatives.