In a global setting dismissive of authentic portrayal and representation, Raeda Taha emphasizes the importance of bearing witness to our experiences and telling our stories. In the midst of uncertainty, aggression, and attempts to forcefully silence the people, Raeda proposes one answer and one choice: speaking up for Palestine. 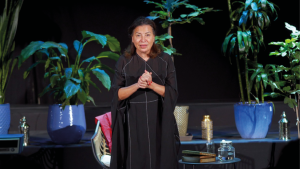 Born in Jerusalem in 1965 and having moved to Amman following the 1967 war, Raeda pursued a BA in speech communication and journalism from George Mason University before working as press secretary for Chairman Yasser Arafat between 1987 and 1994. That being said, Raeda asserts that she “never liked politics” yet “was born in the midst of a political atmosphere and values.” Raeda is the daughter of Palestinian freedom fighter and martyr Ali Taha, who hijacked a commercial plane in 1972. Presented with a sense of national uncertainty, limited means of expression, and the beckoning role of daughter of the revolution, Raeda arrived at what she refers to as “political maturity,” which, she believes, commenced her artistic career. 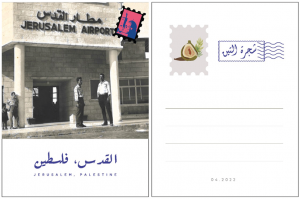 Raeda made her first stage appearance as Saffiyeh in the play Returning to Haifa and in 2015 went on to write, produce, and perform a one-woman show titled Where can I find someone like you, Ali? Detailing the personal archives of her father, Ali’s life and death, she has to navigate the arduous task of deciding how one is to hold a proclaimed hero accountable when the said hero is your father. Within this process, Raeda recognized Ali Taha as a Palestinian rather than strictly as a father. She began to unwind the conventionalized purpose of martyrdom and found forgiveness in the realization that Ali did not leave this world to die; he went to live on – for the people and for the land.

Commenting on generational differences in Palestinian approaches to resistance, Raeda affirms that the greatest contrast lies in the tools that are employed. If the tools of the past were tangible, the virtual tools of the present are the opposite. Nevertheless, she asserts, social media has “equipped us with magic,” allowing us to give means to the cause through numerous mediums from any part of the world. She is convinced that using these tools properly will open the door to a great deal of small victories. One such victory, seen on a daily basis, is the active restructuring of the Palestinian narrative. 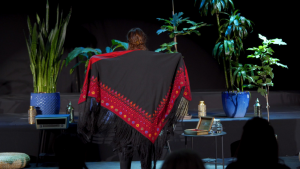 In July 2022, Raeda performed her newest work, titled The Fig Tree. A monodrama, this play conceptualizes the fusion of personal and national liberation by taking the audience on an intimate trip from pre-1967 Jerusalem to life in exile and back to Palestine in 1994. This notion is resonant with the Palestinian people, now more than ever, in light of the recent assaults on artistic expression in Ramallah. Raeda firmly believes that forced silence, imposed by the rule of fear, must be overcome. Just as she is convinced that personal liberation in all its forms does not preclude the struggle for national liberation – on the contrary, it helps it. Censorship, when targeting personal and artistic expression, deters the people from the voice they are meant to embody. As evidenced by Raeda, a pioneer within Palestinian theater with an innate talent for representing characters, for many, this voice resides within the sphere of art.