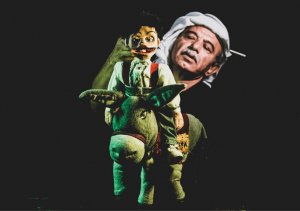 Radi Shehadeh is an independent actor and playwright, the founder of Asseera Theatre, and a co-founder of Al-Hakawati Theatre. During his university studies in theatre in Jerusalem, he founded a club called (“The Club of Free Words”) in his Galilean village Maghar in 1972. The participants did not want to earn money with this club; they simply aimed to make a cultural contribution to their community. With many other volunteering friends, he successfully organized numerous cultural activities, many of them involving some form of theater. This was where Radi concentrated his efforts, and in 1973, he founded his own theatre group called Albalad (The Country).

In 1982, Radi joined Al-Hakawati troupe, a group that performed throughout Palestine and all over the world. After successfully touring for many years, the troupe jointly founded Al-Hakawati Theatre Institute in Jerusalem, where they have their own house theatre. This has made it easier for the troupe to produce as many of their own plays as they could manage and invite other groups to perform as well.

During the first Intifada that began in 1987, Al-Hakawati Theater was closed many times by the Israeli occupation authorities. Producing plays in such a situation was very difficult, so Radi decided to dedicate half a year to writing his first novel. Called Aljarad yohib elbatteekh (Locusts Like Watermelons), it was published in Cairo, Egypt.

Inspired by this experience, Radi decided to make himself independent again and founded Asseera (Epic Storytelling) Theatre, which he has been directing until now, also writing its plays. Asseera has become a well-known touring theatre. Performances target both for adults and children and frequently use puppets and masks. Asseera is not a troupe of actors but reflects Radi’s way of making theatre, sometimes working with freelance actors. Most of the time, however, his wife Muneera and Radi produce and perform their plays together. 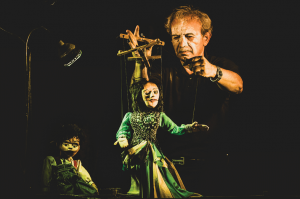 As an independent theater, Radi asserts, they find it not too difficult to produce their plays: Muneera is a puppeteer and costume designer specialized in making masks and puppets; Radi is the playwright, director, and actor. Before COVID and since the pandemic has eased, they have been touring with seven of their plays all over Palestine and sometimes participate in festivals abroad. But Radi authored many more plays and published a number of books on theatre in addition to two more novels called Alghashwa (Misting) and  ”Rass ennabe’a (published in English under the title The Salmon Man).

Radi explains, “I like that our theatre is independent, and we manage to live from the income of our performances, my writing, and the income I make by directing other theater groups who invite me to join them.”

Caring for Our Children