The Old City of Jerusalem Revitalization Program (OCJRP) was established by the Welfare Association in 1994 to achieve the sustainable development and renewal of Jerusalem’s much-neglected Old City. The program worked through a multidisciplinary team on the restoration of historic buildings in parallel with data collection and analysis. This culminated in 2002 with the publication of the Master Plan for the Revitalization of the Old City of Jerusalem, the first of its kind at that time. In 2004, the program was awarded the prestigious Agha Khan Award for Architecture for its work in the Old City of Jerusalem, and in 2022 OCJRP was awarded the Grand Prize of the International Centre for the Study of the Preservation and Restoration of Cultural Property (ICCROM) Sharjah Award for Cultural Heritage Conservation–Management in the Arab Region. In 2006, the program expanded its work to the old city of Nablus. Currently, OCJRP has added the old city of Arabah and Battir (World Heritage Site in Danger) to its list of sites in which it engages.


Since its establishment, OCJRP has comprised four main components that are implemented in parallel. Consequently, to achieve a comprehensive and integrated revitalization process that goes beyond the restoration and rehabilitation of historical buildings and monuments, OCJRP operates in four main interconnected spheres of activity. These include restoration and rehabilitation, documentation and information, community engagement, and training. Thus, OCJRP works in a comprehensive and focused manner to improve the social, economic, and environmental conditions in the Old City of Jerusalem, protect its historic architectural heritage, and build the capacity of professionals and workers in the field of conservation while encouraging community participation in the revitalization process.

For the past 28 years, OCJRP has developed and directly implemented projects that vary in size and level of engagement, from an 18-square-meter family house at the cost of US$20,000 to the three-year, US$3.5 million rehabilitation of Dar al-Aytam al-Islamiyah, located in Jerusalem’s Old City, that dates back to the Circassian Mamluk (1382 to 1517) and Ottoman periods (1517 to 1924) and covers 10,000 square meters of the built-up area. OCJRP projects include neighborhood renewal projects that combine the renewal and rehabilitation of residential complexes with the upgrading of external infrastructure and the establishment of internal service networks, in addition to the adaptive reuse of historic buildings to suit new functions.

OCJRP’s four components can be divided into specific interventions. The restoration and rehabilitation component includes the housing renewal of residential units and complexes (comprehensive restoration and emergency housing rehabilitation), the adaptive reuse of historical buildings and monuments for the purpose of improving and upgrading existing functions in buildings already used by institutions. It may thus restore and rehabilitate abandoned historic buildings and monuments to be used by institutions that provide social, educational, and cultural services to Old City residents, or change the existing use of a historic building for a different function.

The second component, documentation and information, is an integral part of the program’s preservation process. It is based on thorough research as well as physical and analytical surveying methods. The OCJRP’s original project document included the establishment of a system that would create a comprehensive database for the Old City of Jerusalem. It also supported the publication of books, booklets, and documents dedicated to the training of professionals in the field. To this end, the program published carefully prepared revitalization plans for the Old City of Jerusalem based on developmental needs and components required for its renewal.


The third component encourages community engagement and invites youth and children in particular to participate through special activities in the protection of their surrounding historic built environment. In addition, OCJRP has partnered with local grassroots organizations in each location in efforts to develop programs that tackle shared issues and visions, thus building on the program’s strengths and expertise and the partners’ connections to the community.

The fourth and final component has fostered professional skills development and training since the program’s inception. These aspects form integral elements in the OCJRP’s commitment to building the capacity of architects, engineers, contractors, and practitioners in the conservation field, following international laws and standards for restoring historic buildings. Activities include conducting short specialized courses, networking and partnering with similar local and international experts and institutions, offering an internship program for new graduates, and hosting an apprenticeship program for young workers to develop their skills in restoration and in traditional building techniques. 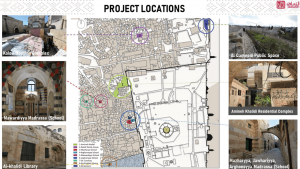 “The Jury has selected this project for its systematic approach to a positive impact on the families living in this area under constant threat from occupying forces. This project demonstrates the power of heritage to help heal those in pain and the positive effect heritage conservation can have on generational trauma and keeping family bonds strong and tied to their rightful property and land.” ICCROM Sharjah Award, 2022

To give a few specific examples, an important project implemented by OCJRP is the rehabilitation and restoration of historical monuments and residential historical buildings in the vicinity of Al-Aqsa Mosque inside the Old City of Jerusalem. This project won the ICCROM-Sharjah Award Grand Prize for Good Practices in Cultural Heritage Conservation and Management in the Arab Region 2021–2022. It included the restoration of eight historical buildings, monuments, and residential complexes and one courtyard, all located in the area surrounding Al-Aqsa Mosque. The project started in 2018 and included the implementation of the above-mentioned four components of the conservation process, and work on the following sites in the vicinity of Al-Haram al-Qudsi al-Sharif: (1) The Aminah Khalidi Residential Complex on Bab al-Majlis Road; (2) the home of the Kalouti family in Aqabat Shaddad; (3) Al-Mazharyya School near Bab al-Hadid (Iron Gate, one of the entries into the Haram al-Sharif), currently used as a residence for Jerusalemite families; (4) the facade of the Arghoneyya School at Bab al-Hadid; (5) Al-Mawardiyya Madrassa (also known as Al-Rasasiya School, located on the road to Aqabat al-Takiya), which is currently used as a mosque and a place to teach memorization of the Qur’an; (6) Jawhariyya School near Bab al-Hadid; (7) Turba of Sitt Tunshuq, a Mamluk monument built between 1379 and 1382 AD and located on Aqabat al-Takiyya Street, around 160 meters from Bab al-Majlis (lit. Gate of the Council, another entrance to Al-Haram al-Sharif) – it lies opposite Sitt Tunshuq’s Palace (another important Mamluk building), the place where Lady Tunshuq al-Muzaffariyya lived from around 1391 AD until her death in 1398 AD, when she was buried in a tomb inside the turba (mausoleum); (8) Al-Khalidi Library on Bab al-Silsila Street; and (9) Al-Qameem public space, located on Salaheya Street in the Bab Hatta area, the neighborhood north of Al-Haram al-Sharif and one of the oldest neighborhoods in the Old City.


This project aimed to strengthen the residents’ steadfastness in staying in the Old City of Jerusalem, particularly in the vicinity of Al-Aqsa Mosque, and to protect it from settlers that seek to displace them and falsify the historical identity of the Old City. The field visits and specialized studies that OCJRP prepared reveal that there is a huge decrease in the architectural and historical fabric of the historical buildings in the vicinity of the blessed Al-Aqsa Mosque that dates back to the Mamluk and Ottoman eras. The project area is constantly targeted by the occupation in its efforts to change the area’s demographic composition, reduce the number of Jerusalemites living in the Old City, and increase the number of Israeli settlers. Both the government and settlers aim to Judaize the history of the city and engage in excavations and continuous underground tunneling beneath the project area to prove their Biblical narrative, consequently damaging the structural foundations of many buildings in the relevant area. Residents also face the constant threat of groundless expulsion from their homes. Several buildings in the area are controlled by settlers, which creates tension and affects the daily life of the inhabitants. Being in proximity to Al-Aqsa Mosque and the Wailing (Buraqu) Wall makes for constant political turbulence, as attested by the recurring assaults carried out by Israeli police.

Ongoing Israeli excavations underneath certain parts of the study area have had and continue to have destructive effects on the historical buildings. Some of the buildings of Mamluk origin are occupied by settlers, while others are controlled by the Israeli municipality. Due to Israeli policies towards Jerusalemites, many of whom are in danger of losing their Jerusalemite identity cards and residence rights in their hometown, the population density within the Old City has increased. This, alongside growing local poverty and neglect by Israeli authorities, has caused culturally important structures to fall into disrepair.


Conservation work in the mentioned area has taken place in various stages to achieve an integrative approach to conservation work. Adhering to the four principles outlined above, the project sought to preserve the value and authenticity of the buildings’ cultural identity and exposed workers and contractors to training programs that concentrated on the historical importance of the monuments and safety measures alongside the technical skills needed. 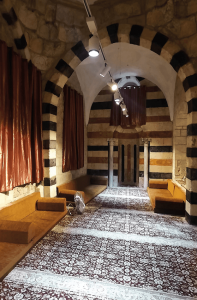 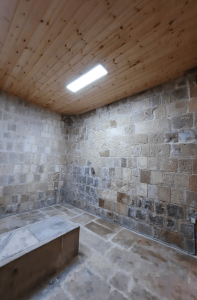 Now completed, the OCJRP can boast that 52 families (245 residents) have benefited from the project, 28 engineers and ten workers and craftsmen were trained, 392 students participated in educational workshops, and an interactive booklet for children on Mamluk buildings was published. 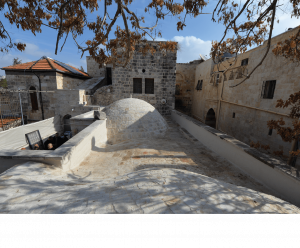 Another important OCJRP project, titled African Quarter (Rabat Ala’ al-Din al-Baseer) Housing–Jerusalem, rehabilitated one of the oldest pilgrim hostels in the Old City of Jerusalem, home of the Palestinian African community since the late Ottoman period. It was selected for comprehensive restoration based on its important historical and architectural value, its proximity to Al-Haram al-Sharif, and the needs of the community for improved living conditions. The first OCJRP project was implemented with full community participation and included the rehabilitation of infrastructure for the whole complex, restoration of the mosque and the attached mausoleum, restoration and rehabilitation of historic elements, and the addition of 15 new housing units within the complex. The project was implemented in three phases. It improved the living environment for 18 families, with increased privacy of the sanitary facilities and separate kitchen facilities for each family, while carefully restoring and protecting the complex’s historic fabric. 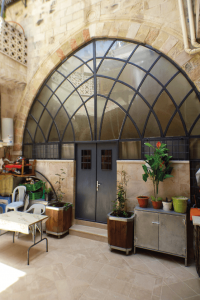 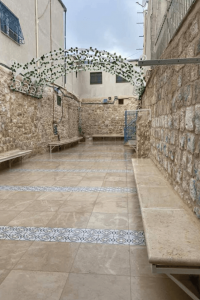